Pastor Larry Glover believes the former property of Glenn Hills Baptist Church is ideal to bring a holistic ministry to the transitional community. Classes such as how to dress for an interview and how to write a resume be offered right alongside Bible studies. JOE WESTBURY/Index
Posted Thursday, September 22, 2016 11:51 am
Joe Westbury

Pastor Larry Glover believes the former property of Glenn Hills Baptist Church is ideal to bring a holistic ministry to the transitional community. In coming months classes such as how to dress for an interview and how to write a resume will be offered right alongside Bible studies. Fourteen new believers will be baptized this Sunday, Sept. 25.  JOE WESTBURY/Index

AUGUSTA — Be careful when you ask God for expansion of your ministry because you just might get it. That’s the tongue-in-cheek word of advice to ministers from bivocational pastor Larry Glover.

The retired U.S. Air Force officer divides his time between his job as behavior health therapist at Fort Gordon and his calling as pastor of Lighthouse Christian Fellowship Baptist Church.

He and his wife, Sean, started the church in the cafeteria of Bel-Air Elementary School in 2009 through the generosity of Principal Mark Boyd, a member of Abeline Baptist Church. The church was in a transitional neighborhood and its members were older and somewhat resistant to change – a not-uncommon situation among some Baptist churches of the past 50 years.

Through the next several years Lighthouse began to grow and moved as better locations became available. Years passed and the two churches continued their opposite trajectories in separate orbits. Then Glover was invited to attend a meeting of the Augusta Association of Baptist Churches.

He liked what he was hearing through the work of the Cross Cultural Commission and developed a relationship with Associational Missionary Minister Dwayne Boudreaux. That’s when things began to happen – at first apparently by accident but, as time progressed, more obviously by divine appointment.

The Association was in a strange predicament – Boudreaux was exploring ways to create a mission center when the Glenn Hills property was donated to the Association. 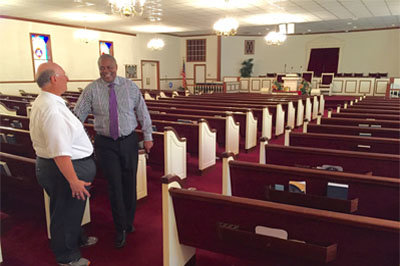 The former sanctuary of Glenn Hills Baptist Church was packed during its hey days but had declined to a handful of members when it deeded its property to the Association. The building now provides growing space for Lighthouse Christian Fellowship Baptist Church, says Boudreaux, left, and Glover, right. JOE WESTBURY/Index

It was an exceptional property ripe for repurposing as a mission center. Its potential was unlimited and its ministry footprint exactly what the community needed. It just needed the right individual, gifted in a variety of skills, to make it work.

And that is where Boudreaux was seeking the right man for the vision.

He wasn’t looking for a traditional church plant, though that would be the core of the ministry. He envisioned a totally new birth in the marginal neighborhood that would offer a variety of classes in life skills that would minister to the whole individual – spiritually, mentally, physically. And he was wise enough to realize that to reach the spirit, you must sometimes first reach the more pressing social needs like employment and low self-esteem.

As time progressed, Boyd – a member of Abilene Baptist Church in the Augusta suburb of Martinez – tapped into Glover’s athletic skills to develop a faith-based basketball camp at the church. The Abilene camp soon established itself as a premier event and was well-received by the community. 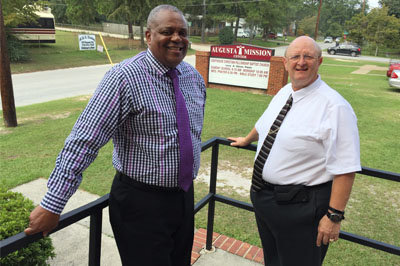 That’s because Glover’s second love, after reaching souls, was playing basketball. He had coached college basketball and had lead the USA Military Basketball team to its first gold medal. That team, composed of military members worldwide, won its title through a spin off competition of the Olympics.

Through the Cross Cultural Commission, the basketball camp, and Boyd’s friendship with Glover, all three men began to bond and sense a growing vision for shared ministry.

That vision came together when Boudreaux, saddled with finding the individual with the right ministry mix for the Augusta Mission Center, shared his vision with Boyd. The man had to have the heart of a soul winner, a love of sports, administrative skills to develop a multilevel ministry, and a vision for a redeeming a transitional neighborhood.

Boyd said he knew just the right person for the job, and his name was Larry Glover.

'All the skills I was looking for'

“Larry had all the skills I was looking for, wrapped up in one individual. It was a tall order I knew was going to be next to impossible to fill, but God was already working in the background leading up to the time the Glenn Hills congregations decided to give us their property,” Boudreaux says.

And Glover, unaware of the Glenn Hills development, was asking God to expand his ministry with a larger facility to more effectively reach Augusta with the gospel.

“Bringing Larry into this vision was like a match and gasoline coming together, ”Boudreaux says with his typical enthusiasm. The results of the past year bears that out.

Since Lighthouse Christian Fellowship settled into the Glenn Hills property, Glover and his wife, Sean, have been busy building bridges and mending fences. Their 120 members have grown by 20 and they have baptized someone every first Sunday since their first service following Thanksgiving 2015.

Since that first service that baptized 11; they will add another 14 this Sunday, Sept. 25.

In its heyday Glenn Hills Baptist Church was one of the fastest growing churches in the 1950s. It was in a well-established community with lots of solid property values for home owners and middle-class Anglo values. But that changed with integration and the aging of the congregation. A slow decline set in, the congregation resisted change, and members who did not move away began to age.

'A community full of problems'

“We have a community full of problems here who feel like the church did not want them so they were not interested in attending,” Boudreaux. “We are now working to convince the neighborhood that Glenn Hills no longer exists and there is a new Lighthouse in its place.”

And the Glovers are up to the challenge. 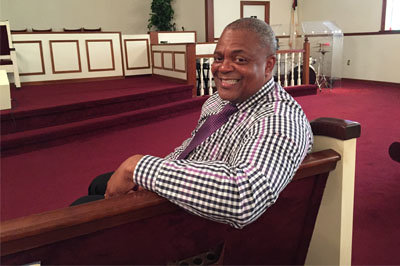 Larry Glover, along with his wife Sean (not pictured), are the driving forces behind the relaunch of Augusta's Glenn Hills Baptist Church into Lighthouse Christian Fellowship Baptist Church. JOE WESTBURY/Index

“The people here are just hanging onto life by a thread, just waiting for someone to love them. We are doing that through a variety of social outreach to help them move up the socio-economic ladder and, along the way, realize God has something better for them.

“We want to help them learn how to write a resume, dress for an interview, make good parenting and lifestyle decisions. And we want them to know, first and foremost, that God has not turned His back on them,�� Glover says.

They have prayer-walked the community, held a Teen Girls Conference teaching biblical modesty and spiritual values and attended by 39 youth, and put a new face on the ministry. They held a popular Vacation Bible School in late June, followed by a block party that attracted even more to the expansive property.

Many children have responded to the outreach, and they are bringing their parents.

On October 22 at its annual meeting, the Augusta Association will vote on welcoming Lighthouse into its fellowship under the watch care of sponsoring congregation Abilene Baptist Church.

Lighthouse will be among four new churches being welcomed into the Association in one year – an historic moment, Boudreaux says, and one that would not have been possible without the partnership between the Augusta Baptists and the Georgia Baptist Mission Board. The two-year venture will come to an end and be recognized at the state convention’s annual meeting Nov. 14-15 in Savannah.

Boudreaux says the most important roadblock to keeping the vision for the Mission Ceter on track is the lack of a fire escape for the building’s second floor. The entire area is targeted to be expanded with the classes such as how to write a resume and how to dress for an interview, among others.

Boudreaux says the Association has the funds but doesn’t have the technical expertise to draw up the plans to meet code and installation. Pray that someone with the right skills will surface to intercede between the Association and local authorities.

The Augusta Association of Baptist Churches will host its Augusta Bridges to Missions Celebration on Oct. 22-23 at Pine View Baptist Church at 119 Pleasant Home Road. The gathering will be part of its annual meeting.

A free missions banquet for member churches, co-sponsored by the Georgia Baptist Mission Board, will be held at 6 p.m. Saturday, Oct. 22. For reservations call the Association office at (706) 736-8705 or visit theaugustabaptistassociation.org. Six guests are allowed per church who are members in the Augusta Association.

State missionaries are also available as guest speakers on Sunday, Oct. 23 to share about the work of the partnership between Georgia Baptists and the Association.