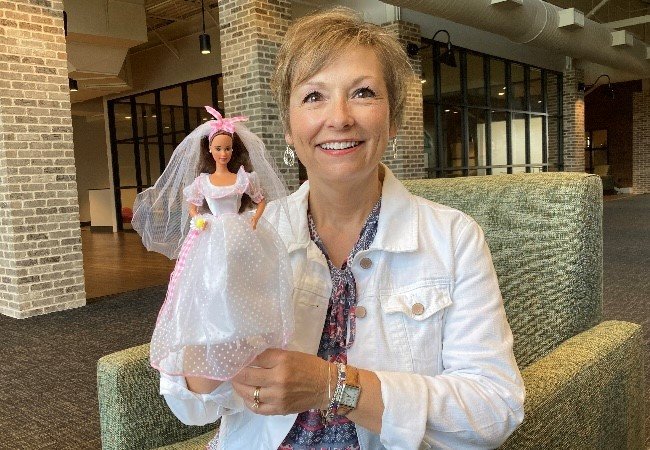 Barbie Doll of Snellville, Ga., poses with a Barbie Doll. As a child, she was teased about her famous name, but, as an adult, she has found it opens a lot of doors for her.

SNELLVILLE, Ga. – With one of the most famous names in the world, Barbie Doll enjoys the reactions she gets when she meets new people.

Sometimes eyebrows shoot upward with surprise. Sometimes, they ask her to repeat it, thinking they have misunderstood.

“Usually, it makes people smile,” she said. “And if you can make somebody smile, that’s always a great thing to do.”

A happy, vibrant Christian on staff at Snellville’s First Baptist Church, the 56-year-old Barbie smiles herself when she thinks back to her first day at school, when she first encountered the teasing that came with being named Barbie in a world of little girls consumed with Barbie Dolls.

“I came home crying and saying. ‘Mom they made fun of my name.’ My Mom said, ‘You’ve got to think of a snappy comeback, because you’re going to get teased about your name. Let’s think of a little snappy comeback to let them know, hey, that’s not going to bother you.’”

It worked, and from that point on Barbie loved her name.

“I would have never changed my name to anything else,” she said. “I wouldn’t have considered going by Barbara, or Babs or Barb.”

For most of the first half of her life, Barbie was Barbie Butterick. Then she met a young man at church named Andrew Doll, who also had been teased in school about his name. Kids capitalized on his first initial to call him “A. Doll.” He vowed he’d never marry a woman named Barbie. He felt like that would be a terrible thing to do to somebody.

But when romance blossomed, Andrew dropped his vow and popped the question. A short time later Barbie had married a Doll.

Now, when someone asks, “Hey Barbie, where’s Ken,” she has a new answer, because her father-in-law’s name is Ken Doll.

Barbie, with one of the biggest names in pop culture, sings second soprano with the Jubalheirs, an all-women’s group based in Georgia. She has served in several leadership roles with the group, including as its president for two years.

She says joining the Jubalheirs is one of the best things that has ever happened to her, aside from accepting Jesus, the name above all names, and marrying Andrew, which gave her a pretty cool name, as well.

“The best thing about having this name is, nine times out of 10, it opens doors for you,” Barbie said. “People will always call you back. I love my name. It’s a fun name.”