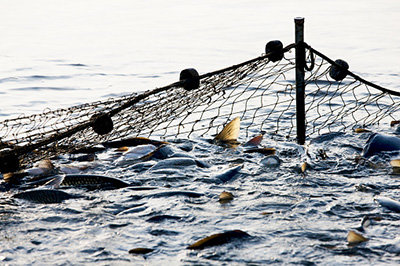 At the recent Southern Baptist Convention, pastor Chris Bolt stood at a microphone to ask Dr. Chuck Kelley a question.

Dr. Kelley is retiring as president of New Orleans Baptist Theological Seminary and was giving his final report to the convention. At the end of the presentation, pastor Bolt asked, "What advice would you give the young people in this room as to how to finish well?"

"That's it – just do what Jesus tells you to do," Kelley advised. "Know that along the way He is going to surprise you. I never had any idea that I would one day be the president of NOBTS. How did I get in this position? Obedience. Just keep doing every day what Jesus puts on your plate to do. Stay obedient in every way that you can."

I sat back in my chair and marveled at the wisdom in that answer. Dr. Kelley has the ability to make the profound simple and to make the simple profound. Finishing well starts with obeying the Lord today.

I love the story in Luke 5 when Peter had been out all night fishing but came back empty-handed. As Peter was washing his nets, Jesus came by and asked to borrow his boat. After teaching the crowds from the boat, it was now time to teach Peter.

Jesus told Peter to go out into the deep water and let down the nets for a catch.

In my mind, I wonder if Jesus said that with a smile on his face, knowing what was about to happen. I doubt Peter was smiling. His response shows that he was tired and frustrated. "Master, we've worked hard all night and haven't caught anything. But because you say so, I will let down the nets" (Luke 5:5 NIV).

Peter obviously didn't think this was a very good idea. He had been up all night. He had just washed his nets. He was ready to go home. There was no logical reason to do what Jesus suggested. And yet, there he was picking up the nets and tossing them back into the water.

There are times when the Lord will ask you to do something and you may not feel like doing it. Real obedience is doing it anyway.

At other times, the Lord may ask you to do something that, on the surface, doesn't appear to make a lot of sense. Remember though, if you only do that which is logical, you may miss the supernatural.

The doors of miracles swing on the small hinges of obedience. "But because you say so, I will let down the nets."

When you read what happened next, you can sense Peter's amazement. "When they had done so, they caught such a large number of fish that their nets began to break" (Luke 5:6). They actually filled two boats that day with fish. It must have seemed like every fish in the Sea of Galilee was fighting to get in those nets!

Peter learned something that day that shaped the rest of his life. He learned that God's blessings are always on the other side of obedience.

Regardless of what you have accomplished in life or ministry, you never outgrow obedience. In the words of Dr. Kelley, "Just keep doing every day what Jesus puts on your plate to do. Stay obedient in every way that you can."

Keith Shorter is pastor of Mt. Airy Baptist Church in Easley, S.C., and a former president of the South Carolina Baptist Convention.