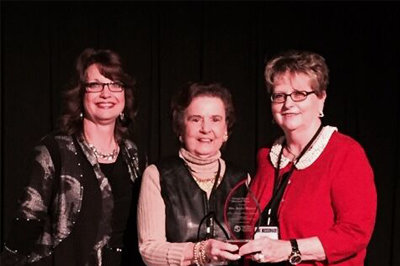 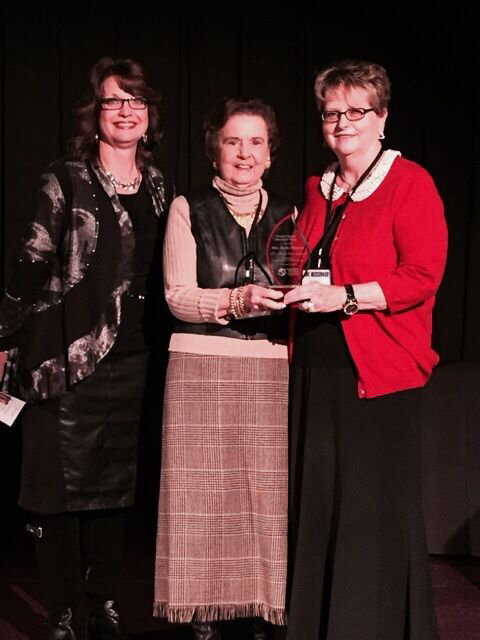 Becky Watters, right, stands with Mary Cox, left, and Trudy Price, center, upon being named the recipient of the Trudy Price Award at the GBC Ministers' Wives Luncheon Nov. 10.

MARIETTA – Becky Brown Watters, widow of Danny Watters, one of Georgia Baptist’s most beloved pastors and denominational leaders, became the recipient of the Trudy Price Award at the Ministers’ Wives Luncheon on Tuesday, Nov. 10 at Roswell Street Baptist Church. Trudy, the wife of Roswell Street’s pastor emeritus, Nelson Price, has been a great role model for many pastors’ wives over the years.

The luncheon is one of the auxiliary meetings held during the annual session of the Georgia Baptist Convention. Nearly 200 ministers’ wives attended this year’s luncheon. The theme for the luncheon was “Walking Worthy in Our Shoes.”

Mary Cox, wife of North Metro Baptist Church, Lawrenceville pastor Frank Cox and GBC state missionary who provides leadership to and for ministers’ wives, hosted the luncheon and presented the award. Mary made the following comments about the award’s beneficiary, “Becky Watters is the real deal! She is a great witness and an example of what a pastor’s wife should be.

“She has been a mentor to many wives, encouraging them to first love God, their husbands and children, and then love the people you serve. Becky has always loved sharing her faith to others. One of the things I love most about her is that she genuinely cares about people.”

Becky hails from Tecumseh, AL, where she as a 17-year-old student prayed a prayer of confession for her sins and believed that Jesus died and rose again. As her future husband Danny Watters led her in the sinners’ prayer, they got up off their knees and Becky started living the life God intended for her live.

She spent much of her professional career with the Douglas County Board of Education. She retired from Lithia Springs High School where she was a College and Career specialist and is currently owner of a wedding business, “Watters in the Garden.” She and Danny have three children: Chad (wife, Kim), Scarlett (husband, Tim) Rackley, and Shonna (husband, Kyle) Privette, and three grandchildren: Brianna, Watters, and Whitner.

Becky has served on the boards of Truett-McConnell College and The Christian Index. Becky and Danny were married for 47 years. For 35 of those years Becky served as a pastor’s wife. For more than a decade she was Danny’s helpmate as he served Georgia Baptists as the missionary in Church-Minister Relations.

Upon receiving the award, Becky stated, “After being a friend of Trudy's for so many years, it was such an honor to receive this award. On the award it says ‘For Godly Character and Faithful Service.’ I always want to exemplify this in my life.

“For the past ten years Danny and I traveled the state of Georgia and we always encouraged others to place their hope in Jesus Christ. There are many hurting pastors and ministry spouses that need to know someone cares about them. I pray that I will always be faithful in my calling to help and courage others.”

The Watters’ daughter, Shonna, extolled her mom’s virtues as a wife, mother, and grandmother and hailed her as an example of what it means for a woman to be faithful to Christ, to His church, and to her family.

Rachel Livingood, a women’s ministry trainer for LifeWay, was the featured speaker for the luncheon and Starla Harbin, wife of Russell Harbin, pastor of Braselton’s Northeast Church, provided the music.