Before he was entertaining Braves fans, The Freeze was burning the track at Shorter

As The Freeze, former Shorter University track star Nigel Talton hasn't been unbeatable, but close. TWITTER/@BeatThaFreeze
ATLANTA — It's become the single most entertaining fan participation gig in sports. Lining up against the wall in left field, a fan gets a 200-foot head start on the warning track. The finish line waiting near the right field foul line beckons.  Then it's time to unleash a cold front at SunTrust Park. Earlier, 26-year-old Nigel Talton changed out of his normal uniform as part of the Braves' ground crew to emerge as The Freeze. The full-body track suit he now wears serves the dual purpose of humiliating his next opponent while reminding fans they can get a delicious frozen drink at their nearest RaceTrac.  The Freeze's big introduction came June 9 with a watch-it-on-a-loop win. That night a Braves fan, thinking prematurely he had Talton beat, pulled up and started celebrating. A second later he caught sight of Talton passing on his left. With a second effort to catch up, the fan tripped and face-planted in the dirt, thereby cementing himself and The Freeze in viral video and gif history.

this is the funniest thing that will happen at a sporting event this year pic.twitter.com/f6Yq9lErin

Talton grew up in Fort Valley, where he played football and ran track at Peach County High. Then, he went on to star in track at Iowa Weslyan College. There, he broke numerous records – including one that had stood for 23 years – before transferring to Shorter. 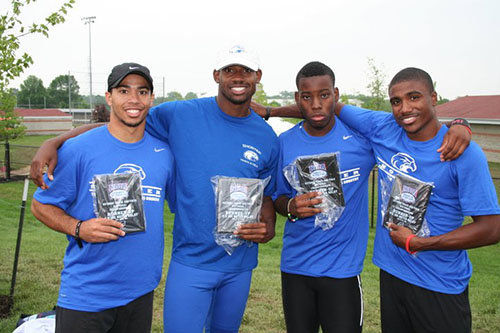 Talton, second from right, was part of the Shorter 4x100m relay team that won a national championship and set the still-standing school record. FACEBOOK/Nigel Talton
As part of the Hawks' track program from 2010-12, Talton took part in three national championships. He ran the 6om and 200m indoor as well as 100m, 200m, and 4x100m outdoor, according to Shorter Sports Information Director Karen Allen.  At the 2012 NAIA Championships, Talton finished third in the 100m. That same year, he was part of the 4x100m relay team that won the national championship and set the existing school record.  Though very rare, The Freeze has lost this season. Once on opening day (when he basically couldn't see through his goggles) and then again recently to an above-average-fit fan. However, he bounced back quickly the next night. 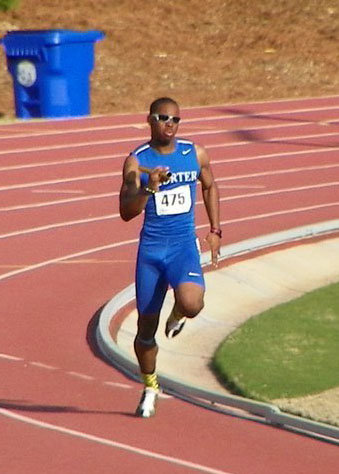 During his collegiate track career, Talton was a five-time NAIA All American and four-time national champion. FACEBOOK/Nigel Talton

Eyes set on the future

The suit Talton wears at SunTrust reminds one of Frozone from "The Incredibles." However, it doesn't feel that much different from something he'd wear in a race. The goggles bring the biggest hinderance, though they don't limit Talton's goals for the future. A one-time hopeful for the Rio Olympics who barely missed his shot, Talton is currently in training for the 2018 world indoor championships in England.  His newfound fame doesn't seem to be slowing down either. Former Olympic sprinter Lolo Jones has volunteered to step in if he needs a break. With Angels superstar Mike Trout injured, MLB Network host Brian Kenny joked (?) that The Freeze was the new face of the sport. "I just want to inspire people not to give up on their dreams no matter what, even if your path is detoured," Talton, whose Twitter bio includes Philippians 4:13, told The Washington Post.  "I never know what'll happen out of this 'Beat the Freeze' contest. I'm just blessed and waiting, waiting for whatever opportunity comes my way."