Bible Study for April 16: He Is Risen 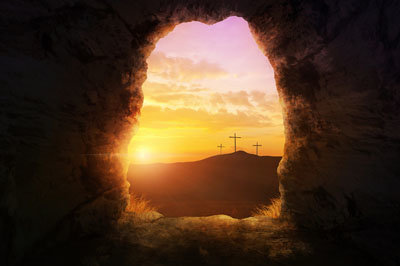 When Jesus was crucified on the cross, He paid the penalty for or sins. But when He arose from the grave He broke the power of sin. Some people, mostly intellects and gnat-chasers, will engage those events carrying the most significance. This is kind of like arguing over the preference of hamburgers or steaks; you can’t have either without the cow.

Jesus makes both the crucifixion and the Resurrection so remarkable because no One else was qualified to pay my sin penalty. Therefore, in coming out of the tomb alive no One but Jesus could have defeated the power of death.

Jesus had raised others from the dead. But in their case it only delayed death. When Jesus came out of the tomb, death had been swallowed up in victory.A dead end to nowhere was now the road to eternal life.

In this text, we find these women coming to the tomb with spices. That was to hide death’s odor, but it wasn’t the smell of death that caught them by surprise. Instead, the sight of the moved stone and the empty tomb awaited them.

The Facts of the Resurrection

We live in an age of skepticism and tremendous hyperbole that allows feelings to interpret reality even when verifiable evidence is known. Folks, facts are our friends. Josh McDowell does an excellent job of relating the facts available to these women at the tomb and the disciples in the room. (The following is taken from an article by Josh McDowell, "Evidence for the Resurrection.")

As we have said, the first obvious fact was the breaking of the seal, which stood for the power and authority of the Roman Empire. The consequences of breaking the seal were extremely severe. The FBI and CIA of the Roman Empire were called into action to find the man or men responsible. If they were apprehended, it meant automatic execution by crucifixion, upside down.

People feared the breaking of the seal. Jesus' disciples displayed signs of cowardice when they hid themselves. Peter, one of these disciples, went out and denied Christ three times.

As we have already discussed, another obvious fact after the Resurrection was the empty tomb. The disciples of Christ did not go off to Athens or Rome to preach that Christ was raised from the dead. Rather, they went right back to the city of Jerusalem.

If what they were teaching was false, the falsity would be evident. The empty tomb was "too notorious to be denied." Paul Althaus states that the Resurrection "could have not been maintained in Jerusalem for a single day, for a single hour, if the emptiness of the tomb had not been established as a fact for all concerned."

Both Jewish and Roman sources and traditions admit to an empty tomb. Those resources range from Josephus to a compilation of fifth-century Jewish writings called the "Toledoth Jeshu." Dr. Paul Maier calls this "positive evidence from a hostile source, which is the strongest kind of historical evidence. In essence, this means that if a source admits a fact decidedly not in its favor, then that fact is genuine."

On that Sunday morning, the first thing that impressed the people approaching the tomb was the unusual position of the one-and-a-half to two-ton stone lodged in front of the doorway. All the Gospel writers mention it.

Those who observed the stone after the Resurrection describe its position as having been rolled up a slope away not just from the entrance of the tomb, but from the entire massive sepulcher. It was in such a position that it looked as if it had been picked up and carried away.

Now, I ask you, if the disciples had wanted to come in, tiptoe around the sleeping guards, and then roll the stone over and steal Jesus' body, how could they have done that without the guards' awareness?

In a literal sense, against all statements to the contrary, the tomb was not totally empty due to an amazing phenomenon. John, a disciple of Jesus, looked over to the place where the body of Jesus had lain, and there were the grave clothes, in the form of the body, slightly caved in and empty like the empty chrysalis of a caterpillar's cocoon. That's enough to make a believer out of anybody.

John never did get over it. The first thing in the minds of the disciples was not the empty tomb, but rather the empty grave clothes undisturbed in form and position.

Christ appeared alive on several occasions after the cataclysmic events of that first Easter. When studying an event in history, it is important to know whether enough people who were participants or eyewitnesses were alive when the facts about the event were published. To know this is obviously helpful in ascertaining the accuracy of the published report.

If the number of eyewitnesses is substantial, the event can he regarded as fairly well established. For instance, if we all witness a murder, and a later police report turns out to be a fabrication of lies, we as eyewitnesses can refute it.

The Faith of the Resurrection

For the disciples, it was a touch test. For us, it is a truth test.