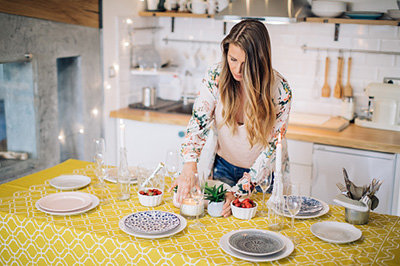 During the time of the Judges, hospitality was vital to society. With no motorized vehicles or instant access to grocery stores, hospitality allowed a measure of security to travelers. As God gave abundantly to Israel, he expected Israelites to be hospitable to those in need. Abigail’s husband Nabal didn’t get that memo.

Nabal is described to us as a very rich businessman. Nabal’s societal duty was to provide hospitality to David and his men. His biblical duty was to provide some way for these men not to starve. However, Nabal is not just a very rich successful business man; he is a jerk. The Bible describes Nabal as “harsh and badly behaved.” Thankfully, Nabal at least had the wisdom to marry up; his wife Abigail was “beautiful and discerning.” Into this tense situation Abigail provides a case study in conflict resolution.

Abigail’s first response to conflict is humility. She admits the wrong her husband has done quickly. When many of us face an intense conflict, our first response is to become the victim. We shift blame wherever would leave us the least responsibility. “It’s not my fault my husband is a fool! Don’t I suffer him every day?” a lesser woman may whine. Not Abigail.

Her instant reaction is to mobilize her resources to cover the need, bow herself to exalt God and this godly warrior (“The LORD” and “my lord”), and ask forgiveness without complaint or excuse. Abigail’s humility disarms David (quite literally in this case) and saves her husband’s life.

Humility should not be defined as getting others to think less of you. Pride disguises itself as humility often. Abigail’s humility is not an attempt to get David to think she is amazing and generous. Humility is thinking of yourself less. Abigail puts herself in harms way in order to do good for Nabal and David. Resolving conflict as a Christian means sacrificing a personal good for the benefits of others, placing God’s ways before ours.

Abigail’s second action can only be described as lavish generosity. Abigail does not just send an apology letter to David. She sends him a lush thanksgiving meal! Abigail sends David “two hundred loaves and two skins of wine and five sheep already prepared and five seahs of parched grain and a hundred clusters of raisins and two hundred cakes of figs.” She blue-boxes him a meal greater than most people’s yearly income.

Her generosity in conflict is reminiscent of Zacchaeus. After Zacchaeus invites the Lord to his house, he returns all the stolen taxes he collected to the people — he returns the sum of his wealth. This is Christian hospitality. Christians do not give as an hour glass drops sand; Christians give as a water passes through hands. All that Nabal has belongs to the Lord, Abigail’s conflict resolution acts on that understanding.

Generosity is crucial to God’s kingdom. However, we need not think of generosity in terms of our own pockets and our own giving. We need to think of generosity in terms of God’s lavish love. From the sending of his son to dressing the flowers of the field, God withholds nothing that would benefit his people. Conflict resolution requires the same generosity God gives to us. We need to hold on loosely to the wealth and prosperity God gives to us. Generosity means not withholding anything that would benefit others, especially those with whom we are in conflict.

Abigail’s Heart and Ours

Abigail’s gracious humility and generosity, softens David’s heart. David repents of his warrior reaction to Nabal as Abigail’s gentle spirit and prudent action prompts a more shepherd-like reaction. David blesses rather than curses, saying, “Blessed be the Lord, the God of Israel, who sent you to me this day!”

Abigail sets a beautiful example for Christian women regarding marriage and hospitality. The hero of 1 Sam. 25 is not the wealthy businessman or the veteran promised king. The hero of 1 Sam. 25 is the heroine. Abigail does not complain against her husband (though she admits he is a fool). She does not attempt to change him or berate him. Abigail applies God’s universal generosity to the circumstance of her life.

Abigail, like us, has every opportunity to let her wealth become a curse to her or to bemoan her circumstances. Abigail does not give into pride and let the victim’s mentality dictate her response. From her humility to her gracious hospitality, Abigail is a servant of God.