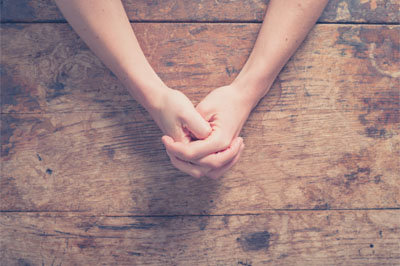 A transformed life through prayer begins with the focus getting off of us and on to the Lord, says Hiram pastor Derek Berry. LOLOSTOCK/Getty
Posted Monday, November 13, 2017 4:11 pm
Rick Statham

Paul was inspired to write “Be joyful always; pray continually; give thanks in all circumstances, for this is God’s will for you in Christ Jesus.” (1 Thess. 5:16-17). There is no uncertainty in those words is there? That’s right, no uncertainly – just clarity.

People often ask, “What is God’s will?” There are many things I could share from God’s word but the list must include these three: be joyful always; pray continually; and give thanks in all circumstances.

I love to search the Scripture to find people whose life testimony exhibits the truth of God’s Word in action. One such person is Hannah, the beloved wife of Elkanah. Her testimony of deep and abiding trust in the LORD is found in 1 Samuel 1-2. The Scripture gives us a glimpse into the beautiful, authentic, faith-filled heart of a godly woman who was joyful, prayerful, and thankful – before and after her heart’s desire was granted her. She trusted the LORD in the good days and difficult days.

This passage has special meaning to our family. I lead annual trips to the Holy Land, which I’ve named “Step into The Story,” in hopes of conveying to people they don’t merely read God’s story but rather they are a part of God’s story. A few years ago we added ancient Shiloh to the itinerary. Shiloh is the place where the Tabernacle stood for over 300 years prior to Jerusalem becoming the place of worship. In February 2016, my daughter and her husband were with us at the place believed to be the site where the Tabernacle would have been. She and Brian asked the LORD for a child at Shiloh.

You guessed it. Three months later, after a family outing they told us they were expecting their first child! Excitement, anticipation, jubilation, and a host of other words filled the hearts of our family. They kept it quiet for some time just to be sure all was well. On Father’s Day Lauren wrote down a statement from my sermon in her Bible – “Trust God with your children on the first day and until the end. -Dad (6/12/16)." A few weeks later, after having a “we are expecting” photoshoot holding a sonogram image of the precious little one, they decided to post on Facebook that she was expecting her first baby!

Within hours she had over a thousand “likes.” Word was out. Wonderful news – everyone declared. But then the next day the call came – “Daddy, something is wrong. I don’t feel right.”

“Call the doctor immediately,” I said. Her mother accompanied her to the doctor that day. The call came.

A few days later Lauren delivered the tiny little precious baby we would never get to know this side of heaven. We wept – but not as those who have no hope. We thanked God for this little life who would forever be known to us as Shiloh Petersen, named after the place of Hannah’s weeping, pleading, and rejoicing thousands of years before. Different translations of the name Shiloh include "place of rest," "the one to whom it belongs" (Gen. 49:10), and "peace."

Our Shiloh has returned to the one to whom he/she belongs, to our Prince of peace and in that we rest. Shiloh Petersen was entrusted to her mother’s womb for a short season, but his/her soul to our loving God forever. Hannah’s story became our story.

The following February my daughter was unable to make the trip to Israel because she was pregnant with our second grandchild! She asked me to go to Shiloh and thank God for hearing their prayers for a child -- the first and second time. Based on her own faith journey, she asked me to have our tour group pray at Shiloh for her friend who was longing for a child. I posted on Facebook that we were going there and if anyone wanted us to pray for them in regards to having a baby to let me know.

We were inundated with requests. We wrote their names and prayer requests down, then photographed them while surrounded by the hands of those praying over them. Lauren has since given birth to a precious little girl named Julianne (whose miracle story is for another day) and several of the couples we prayed for are now expecting!

Hannah appears to be a woman who deeply loved and trusted the LORD long before her desperate cries in prayer at Shiloh. The Scripture says “in bitterness of soul Hannah wept much and prayed to the LORD” (1 Samuel 1:10) and “then she went her way and ate something, and her face was no longer downcast” (1:18).

There is no doubt in my mind Hannah knew the joy of the LORD long before she found herself “downcast” before the LORD. Does this mean her “joy in the LORD” was gone? I don’t believe so. She didn’t run from the LORD in her hour of need; she ran to Him!

Again, Lauren wrote in her Bible during another of my sermons -- “It is in your darkest hour when God does His greatest work” - Dad (11/9/16). Hannah’s life, Lauren’s life give testimony to this truth. Run to Him!

Hannah found renewed strength in the presence of the LORD through prayer. The peace of God’s presence allowed her to walk on in trusting faith in spite of what seemed to be circumstantial impossibility. In His time God granted her request for a child – Samuel - and her heart responded with a full measure of surrender and devotion (1 Samuel 1:26-28). Her story is now known as a story of grateful praise (1 Samuel 2).

Joy – for God is always good.

Pray – for God is faithful.

Thanks – for God is merciful and gracious.

Trust - Do I trust the LORD in all my days – good and difficult?

Pray - Do I share my innermost thoughts and longings with the LORD in prayer?

Pursue - When my dreams don’t come true do I run to the LORD or from Him?

Praise - Will my life be known as a life of grateful praise?