Shortly after his introduction as a state missionary, Barker departed from the Georgia Baptist Mission Board with a truck loaded with backpacks for children in Appalachia. JOE WESTBURY/Index
Posted Thursday, December 14, 2017 12:00 pm
Joe Westbury

Shortly after his introduction as Georgia Baptists' newest state missionary, Barker departed from the Mission Board with a truck loaded with backpacks for children in Appalachia. JOE WESTBURY/Index

When Bill Barker was 16 years old, he promised God that if he ever was able to get out of West Virginia he would never return.

That’s not exactly how it worked out.

Barker did escape his rural roots and answered the call to the ministry as an Independent Baptist. But the road was not always easy.

For one thing, he was forced to interrupt his education at conservative Tennessee Temple University in Chattanooga, TN, because he had a mustache. Disillusioned with the Independent Baptist movement, a chance encounter with a Georgia Baptist minister whose members visited him while in a Dalton hospital – and who also shared an Independent background – changed all of that. 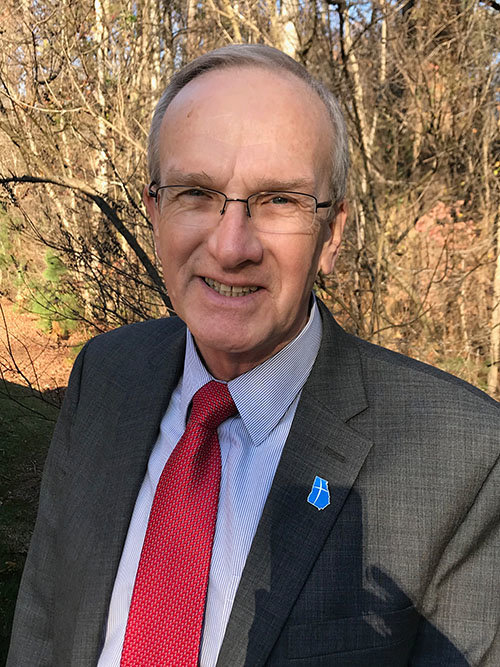 One of the key attractions was how Southern Baptists funded their missionaries through something he came to know as the Cooperative Program. It just made sense, he reflects.

“I was not a Georgia Baptist from my upbringing but you invested in me in ways that only God can understand, including allowing me to complete my education at Shorter College (now University),” he said on Dec. 12 during the Executive Committee meeting of the Georgia Baptist Mission Board. His testimony detailed his faith walk in which Georgia Baptists played a powerful role … a role which, after 16 years of serving Southern Baptists in Appalachia, has brought him into the Georgia Baptist fold as its newest missionary.

Effective Jan. 1, Barker – now affectionally known as Mr. Appalachia by thousands of Baptists along the Eastern Seaboard – will oversee the Mission Board’s outreach with residents in the nation’s most poverty-stricken area. It will be a newly created position that will cement Georgia Baptists as a leader in ministry in Appalachia.

Barker will retire on Dec. 31 as regional director of Appalachian Regional Ministries, commonly known as ARM. In that role as a North American Mission Board missionary he coordinated the popular Christmas backpacks ministry for multiple state conventions. He also oversaw an outreach known as the Mississippi River Ministry.

The ending of one ministry, the launch of another

The ending of one role, however, will signal the beginning of another as he assumes the leadership position of the newly named Appalachian Mountain Ministry.

The move signals an ongoing direction of the Georgia Baptist Mission Board as it more aggressively moves into a missionary sending agency through gifts to the Cooperative Program and the Mission Georgia State Mission Offering.

In the coming months Barker will build relationships with state conventions to determine their interest in continuing to affiliate with the new entity. Under the North American Mission Board, he coordinated the ministry with 13 conventions in a dozen states spreading from Montgomery, AL to Adirondack, NY. 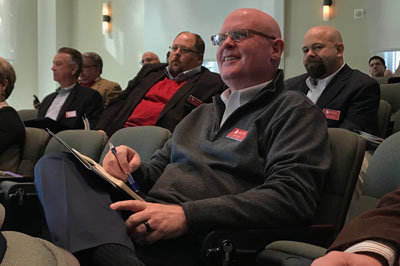 Through the end of the year ARM will be based in Hurricane, W. VA but will move to Barker’s new base of operations in Northwest Georgia. To differentiate itself the Georgia ministry will revert to the outreach’s original proposed name of Appalachian Mountain Ministry.

Barker and his wife, Arlene, are in the process of moving to Northwest Georgia to establish residence and the ministry's new base of operations. They have two grown sons – Brad who lives in Brunswick with his son, Kolt; and Alex and his wife, Mandy, and two sons who live in Franklin, NC.

The success of Barker’s ministry speaks for itself.

Since ARM was founded – and he was hired after an initial exploratory phone call from Georgia Baptist state missionary George Barnett – the impact has surpassed all expectations. In the past 16 years one-million short-term volunteers from across the Southern Baptist Convention have been placed on the field and nearly 80,000 persons have come to faith in Christ. From a Georgia perspective, the results of its backpacks ministry have been just as overwhelming.

Backpacks first began as a shoebox ministry of Georgia WMU

In 2001 Georgia Baptist Woman’s Missionary Union launched the Christmas emphasis in Georgia by collecting shoeboxes for underprivileged children in Appalachia. Due to possible confusion with Operation Christmas Child which also collected shoeboxes, the emphasis was eventually changed to Backpacks for Appalachia.

A very surprising 4,400 backpacks showed up at the church and the evangelistic outreach caught fire. Since then churches and Associations, through groups such as Sunday School and WMU, have embraced the children of Appalachia by collecting 163,312 backpacks filled with gifts, school supplies, Bibles, and winter coats. Due to the Georgia effort 6,794 professions of faith have been recorded in the past 5 years.

At the December 12 Executive Committee meeting Waters, who serves on the Committee, said he was overwhelmed with the impact of the outreach.

"I was thrilled to learn that Bill Barker would be joining Georgia Baptists as one of our state missionaries. He has demonstrate an unwavering commitment to Christ and to hurting people across Appalachia, and he embodies a selfless spirit, which mirrors the humility of Christ." he told The Index. 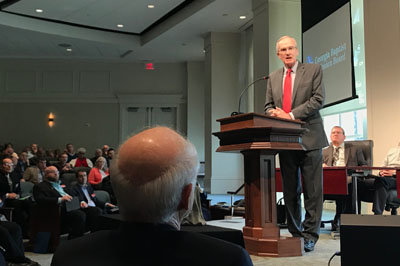 Bill Barker speaks to the Dec. 12 Executive Committee after being introduced as the state's newest missionary to Appalachia. JOE WESTBURY/Index

"Remembering the first year we fully embraced this effort, I now stand amazed to see how it has grown in these few short years. To learn that Georgia Baptists gave 36,353  backpacks this year, along with a total of 72,021 combined from other states, is remarkably humbling.

At the same meeting, Mike Stone – who was elected president by messengers as last month’s annual meeting – took up the cause and said it will be a key emphasis of his presidency. Barker said he was very encouraged to see Stone embrace the ministry and bring a new family focus to the outreach.

"It will be great to see it expand beyond church groups and involve children as well as parents,” Barker explained.

As surprisingly well as Georgia and other state conventions have done, the need remains great. Last year Barker had 60,000 requests from elementary schools and others in Appalachia. This year it jumped to 80,000 and collections from participating state conventions totaled 72,106. Slightly more than half of those came from Georgia Baptists.

“Emmanuel Baptist Church in Blackshear, where Mike serves as pastor, has shown it is committed to the project. His church just provided 700 which is very significant,” Barker added.

This year the emphasis was expanded to include children in two southwest Georgia Associations with some of the state’s highest childhood poverty rates. The theme was also adjusted to “Backpacks of Hope” to highlight both Appalachia and Georgia.

“A cold and hungry child does not care if you are Baptist, Methodist, or Church of God”

Barker said the ministry is so popular he has received requests from those of other faiths and even no faith.

“A cold and hungry child does not care if you are Baptist, Methodist, or Church of God,” he said with a chuckle. However, for Southern Baptists the backpacks provide a wonderful opportunity to tell and share the love of Christ in a memorable and tangible way.

The outreach has also become more inclusive as it has grown. Today one-third of the backpacks are delivered to people of color where originally there were few, if any. The ministry is aggressively reaching out to Asian, African-American, and Hispanic communities. And in Northern Syracuse, NY, Arabic communities are being served in the name of Christ.

For more information about volunteer opportunities or the backpacks outreach contact Barker at bbarker@gabaptist.org after January 1.