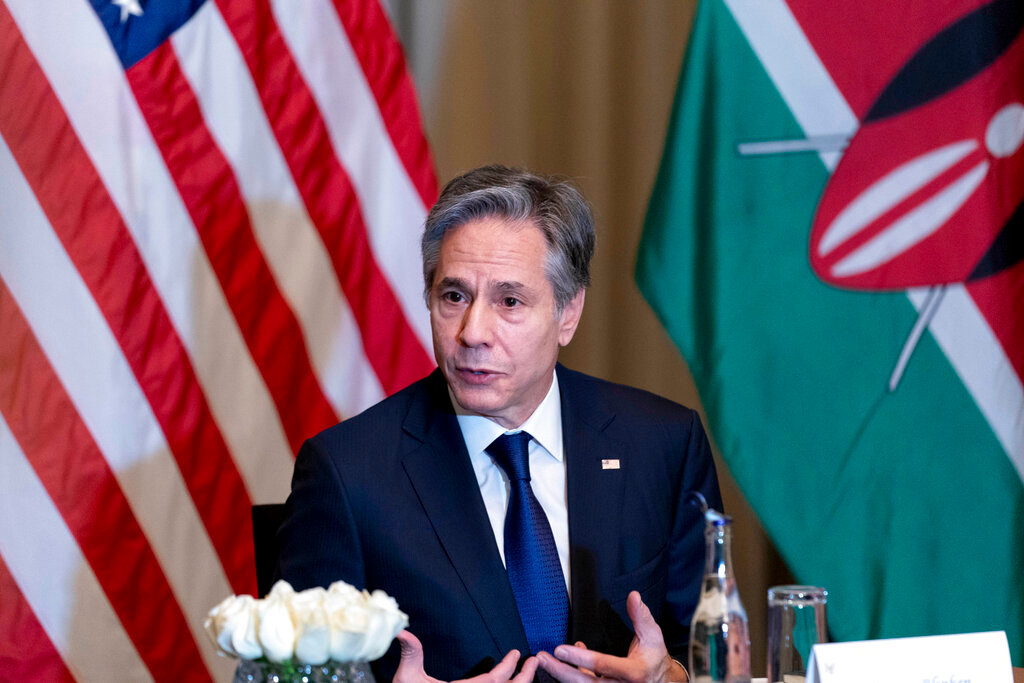 NAIROBI (AP) — U.S. Secretary of State Antony Blinken opened his first official visit to Africa in Kenya with an appeal Wednesday for the preservation of democracy and inclusion in politically and ethnically fractured societies. His message was delivered amid worsening crises in neighboring Ethiopia and Sudan.

With insecurity wracking both of those countries, Blinken began a three-nation African tour in a country with it own turbulent history of democracy. Kenya will face another test of stability in a presidential election next year yet has emerged as a player in attempting to ease the growing Ethiopian conflict.

Before meeting President Uhuru Kenyatta and other senior Kenyan officials, Blinken spoke with civic leaders about the importance of combatting what he termed “democratic recession” around the world, including challenges in the United States that show “just how fragile our democracy can be.”

“This is an important time,” he told a small group of human rights, labor and anti-corruption advocates at a Nairobi hotel. “Around the world we’ve seen we’ve seen over the last decade or so what some have called 'democratic recession'.”

“Even vibrant democracies like Kenya are experiencing these pressures, especially around election time," Blinken said, alluding to the presidential election set for August 2022. Combatting misinformation, political violence, voter intimidation and corruption is critical to halting the backsliding.

Blinken is looking to boost thus-far unsuccessful U.S. diplomatic efforts to resolve the deepening conflicts in Ethiopia and in Sudan and to counter growing insurgencies elsewhere, like Somalia. His visit to Kenya, Nigeria and Senegal this week follows months of Biden administration attempts to ease both situations that have yet to bear fruit despite frequent lower-level interventions.

Months of engagement by the administration, including an August visit to Ethiopia by U.S. Agency for International Development administrator Samantha Power, several trips to Addis Ababa and Nairobi by Biden’s special envoy for the Horn of Africa, Jeff Feltman, and a current visit to Sudan by the top diplomat for Africa have produced little progress.

Instead, conflict in Ethiopia has escalated between Prime Minister Abiy Ahmed’s government and leaders in the northern Tigray region who once dominated the government.

The tensions, which some fear could escalate into mass inter-ethnic killings in Africa’s second-most populated country, exploded into war last year, with thousands killed, many thousands more detained and millions displaced.

Rebel Tigray forces are advancing on Addis Ababa, Ethiopia's capital, amid increasingly dire warnings from the U.S. and others for foreigners to leave.

While holding out hope that a window of opportunity for a resolution still exists, the Biden administration has moved toward sanctions, announcing the expulsion of Ethiopia from a U.S.-Africa trade pact and hitting leaders and the military of neighboring Eritrea with penalties for intervening in the conflict on Ethiopia’s behalf. Sanctions against Ethiopian officials, including Abiy, a Nobel Peace Prize laureate, are possible.

Ethiopia has condemned the sanctions and stepped up its criticism of “meddling” in its internal affairs. And in Addis Ababa, the headquarters of the African Union, and elsewhere, there is skepticism and hostility to U.S. pressure for an immediate cease-fire and talks despite America being the country’s largest aid donor.

As Feltman has shuttled between Nairobi and Addis Ababa with an eye toward easing tensions in Ethiopia, he and the administration have also been confounded by developments in Sudan, where a military coup last month toppled a civilian-led government that was making significant strides in restoring long-strained ties with the U.S.

Coup leader Gen. Abdel-Fattah Burhan tightened his grip on power last week, reappointing himself as the chairman of a new Sovereign Council. The U.S. and other Western governments criticized the move because it did away with a joint military-civilian council already in place. The Sudanese generals responded by saying they would appoint a civilian government in the coming days.

Burhan moved against civilian Prime Minister Abdalla Hamdok just hours after Feltman had left Sudan's capital, Khartoum, on a mission intended to resolve escalating tensions between them. The U.S. has retaliated over the coup by suspending $700 million in direct financial assistance to Sudan. Further moves, including a slowdown or reversal of a multiyear rapprochement with the government, could also be in the works without changes.

The top U.S. diplomat for Africa, Molly Phee, was in Khartoum earlier this week and will be joining Blinken in Nairobi to discuss her efforts in Sudan. Phee met Tuesday with Hamdok and with Burhan. Burhan said the leaders of Sudan were willing to engage in dialogue with all political forces without conditions, according to a statement from the newly appointed Sovereign Council.

In addition to trying to cool tensions in the region, Blinken’s trip is also aimed at raising Washington’s profile as a player in regional and international initiatives to restore peace and promote democracy as it competes with China for influence in developing countries.

The Biden administration’s competition with China for influence didn’t get off to a great start in Africa. The coronavirus pandemic canceled a planned early summer visit by Blinken to the continent. The trip was rescheduled for August, only to be postponed again due to the turmoil in Afghanistan that preoccupied Washington.

Now, three months later, Blinken hopes to deliver the administration’s “America is back” message to Africa. Despite its importance in the U.S.-China rivalry, Africa has often been overshadowed by more pressing issues in Europe, Asia, the Middle East and even Latin America despite massive U.S. contributions of money and vaccines to fight the pandemic and other infectious diseases.

All the while, China has pumped billions into African energy, infrastructure and other projects that Washington sees as rip-offs designed to take advantage of developing nations.

Associated Press writers Cara Anna in Nairobi and Samy Magdy in Cairo contributed to this report.