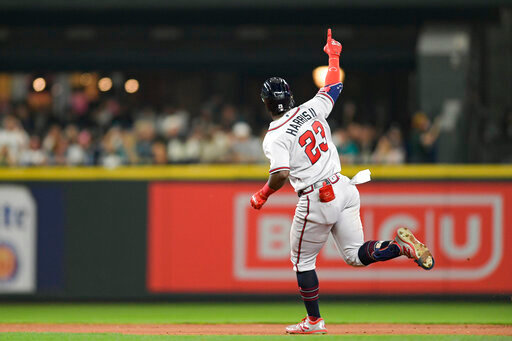 SEATTLE (AP) — Dansby Swanson hit one of Atlanta's four home runs and the World Series champion Braves grabbed sole possession of first place for the first time all season with a 6-4 victory over the Seattle Mariners on Friday night.

Robbie Grossman, Travis d'Arnaud and rookie Michael Harris II also went deep for the streaking Braves, who won their eighth straight and finally jumped a half-game ahead of the Mets in the NL East after chasing them for five months. New York lost 6-3 at Miami earlier in the night.

Atlanta was seven games back on Aug. 8 and 10 1/2 behind on June 1. The only previous day this season the Mets did not hold at least a share of the division lead was April 11.

Swanson gave Atlanta a 2-0 lead in the first with a two-run homer off Robbie Ray (12-9), who gave up four runs in five innings.

After a walk to Jesse Winker in the second, Santana tied it with a home run.

Atlanta reclaimed the lead in the fourth when Harris led off with a double and scored on Grossman's single.

A two-out homer by d’Arnaud in the fifth made it 4-2. Crawford answered with a solo shot in the bottom half, his first home run since June 1.

Harris and Grossman both homered in the sixth to make it 6-3.

Santana hit his second home run of the game and 14th of the season in the seventh. Seattle then had runners on first and second with two outs, but A.J. Minter struck out Ty France to end the inning.

Raisel Iglesias struck out three in a hitless eighth and Kenley Jansen whiffed two in a 1-2-3 ninth for his 33rd save.

Seattle has lost three of four but remains in a tight race for an American League wild card.

The Mariners placed utility player Dylan Moore (oblique) on the 10-day injured list Aug. 30. Seattle manager Scott Servais said Friday that Moore is “feeling better,” but not doing much rotational work or swinging a bat yet. “We’ll find out in the next couple of days where he’s at,” Servais said. “He’s a nice weapon to have. We’ve missed him. We’ll know more once we get through the weekend.”