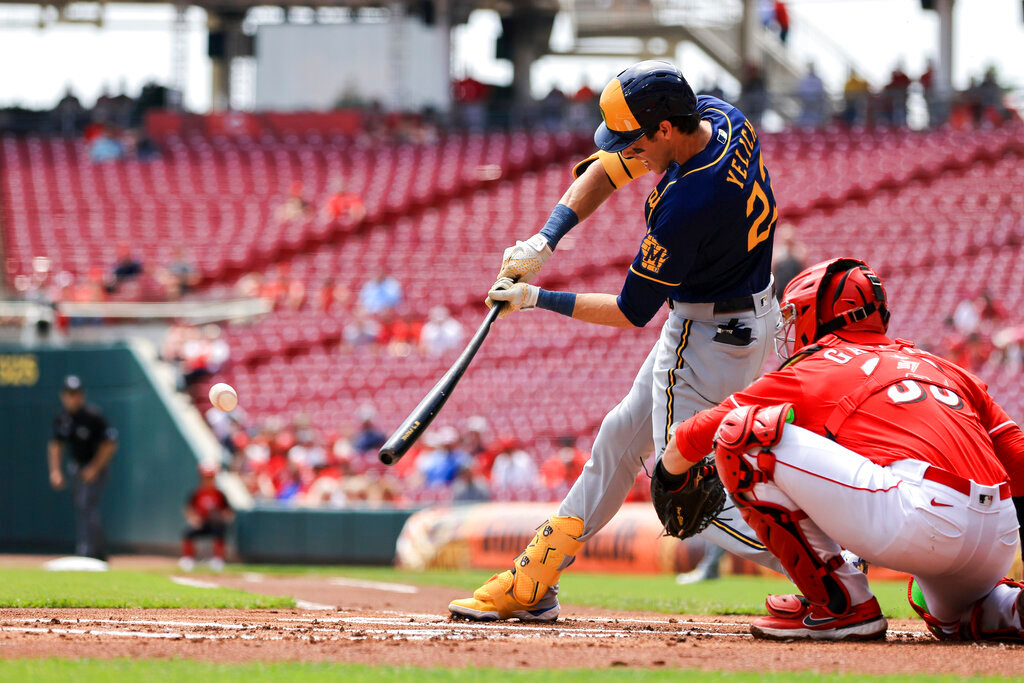 Milwaukee Brewers' Christian Yelich hits a ground-rule double during the first inning against the Cincinnati Reds in Cincinnati, Wednesday, May 11, 2022. (AP Photo/Aaron Doster) 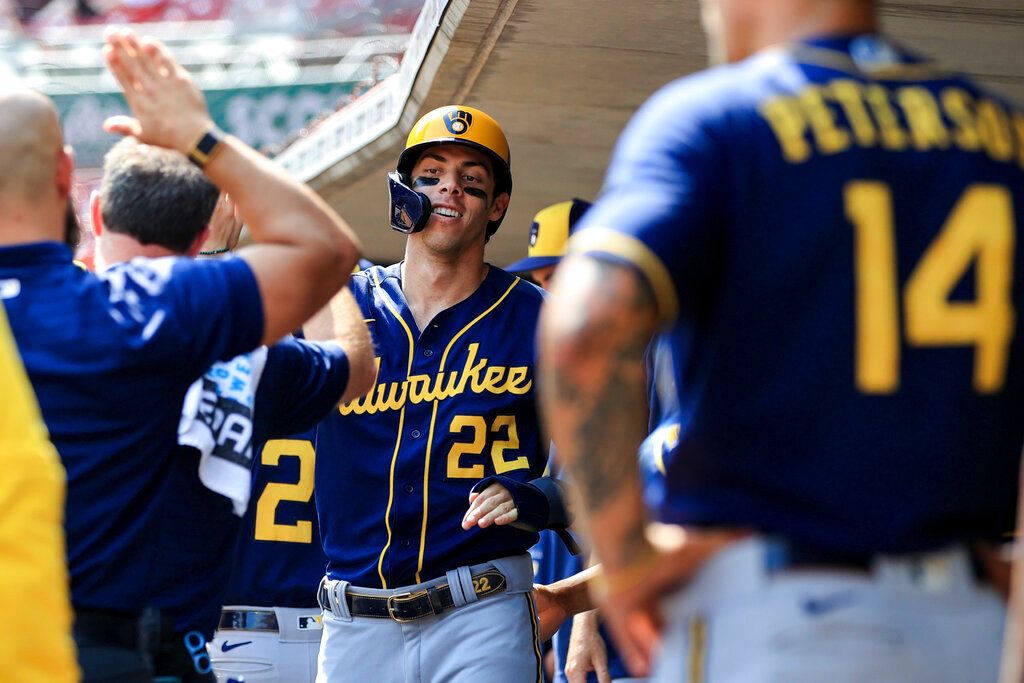 Milwaukee Brewers' Christian Yelich high-fives teammates in the dugout after scoring a run during the ninth inning against the Cincinnati Reds in Cincinnati, Wednesday, May 11, 2022. The Reds won 14-11. (AP Photo/Aaron Doster)
Previous Next
Posted Thursday, May 12, 2022 9:28 am
By MITCH STACY, Associated Press

CINCINNATI (AP) — Christian Yelich bolted out of the box, sprinting around the bases and cruising into third standing up for his first triple of the season.

A very well-timed triple, too.

The Milwaukee Brewers star hit for a record-tying third cycle — amazingly, all of them against Cincinnati. Yelich accomplished the feat Wednesday in a 14-11 loss to the Reds.

“I’d definitely rather win the game,” Yelich said. “Weird things happen in baseball. Any time you can hit for a cycle, it’s pretty cool. I will try to enjoy it as much as possible."

Yelich tripled during a six-run ninth inning rally. His teammates were well aware of the significance, and they stood on the top row of the dugout to applaud him.

Earlier, Yelich doubled in the first, hit a three-run homer in the third and singled in the fifth.

Late in the 2018 season, Yelich hit for the cycle twice in a span of three weeks against the Reds.

“A lot of things kind of have to happen to hit the cycle,” the former National League MVP said. “It is hard enough to get four hits in a major league game and to have the right kind, there’s an element of luck. It is still pretty cool.”

Tyler Stephenson drove in four runs with a pair of doubles and Colin Moran hit a three-run homer for Cincinnati. The Reds, with the worst record in the majors, won their second straight series by topping the NL Central leaders.

“All these teams in the league are good -- you have to keep playing, you have to keep going,” Reds manager David Bell said. “Great day offensively. Not only the hits and the RBIs, but just grinding out at-bats, controlling the strike zone, getting guys in base. That created the opportunities.”

Tyler Naquin hit a bases-loaded triple for Cincinnati, which led 7-0 after two innings. Moran homered during a six-run eighth that made it 14-5.

Milwaukee's first six batters reached base in the ninth, including home runs by Jace Peterson and pinch-hitter Mike Brosseau. Joel Kuhnel relieved and gave up a pair of RBI doubles while getting the final three outs.

Reds starter Vladimir Gutiérrez allowed four runs and six hits over 4 2/3 innings. The right-hander exited with a four-run lead and the bases loaded in the fifth, and Alexis Diaz (1-0) came in and struck out Luis Urías.

Adrian Houser (3-3) made it through four innings. He gave up six hits and seven runs, four of them unearned because of two infield errors. Reliever J.C. Mejia was charged with five runs in the Reds' eighth-inning outburst.

“I thought Adrian just getting through the fourth inning was a success," Milwaukee manager Craig Counsell said. "Nothing went right for him in the first two innings.”

The Reds scored four in the first on Stephenson's RBI double and Naquin's bases-loaded triple off the center-field wall that came about a foot short of being a grand slam.

The Reds loaded the bases again in the second. After Houser fanned Mike Moustakas for the second out, Stephenson struck again, driving in all three in with a double to left.

Tommy Pham drove in two more runs for the Reds in the eighth with a bases-loaded single, followed by an RBI single by Moustakas to cushion the lead.

Brousseau and Peterson homered off Dauri Moreta in the ninth.

Detention of WNBA's Griner in Moscow extended for 1 month