MOUNT VERNON — Brewton-Parker College is mourning the loss of a DeKalb County student who was shot and killed over the weekend in an off-campus party.

Southeastern Georgia television station WTOC reports that Stevenson Derival, 20, was attending the house party in the 1100 block of Walker Street near the campus. About 200 guests were at the gathering when Derival was killed around 1:30 a.m. on Sunday morning, Sept. 24. 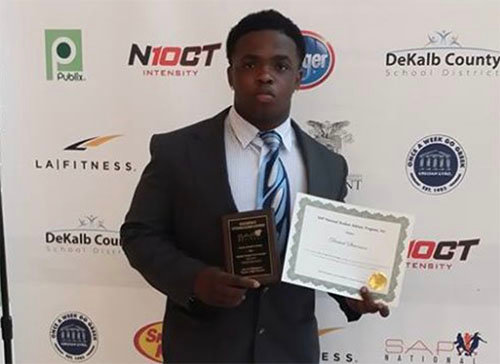 Stevenson Derival, who updated his Facebook page in February 2016 with this unidentified image, was shot and killed at 1:30 a.m. Sunday morning in an off-campus party. He was a student at Brewton-Parker College. FACEBOOK/Index

The crowd scattered immediately where one other person was also injured. The shooter escaped and is being sought by Mount Vernon Police and related law enforcement agencies. Police have labeled the death as a homicide.

WSAV-TV from Savannah reports that witness say the college athlete from Decatur was shot several times during the incident. The Atlanta Journal-Constitution is reporting that Derival, who attended Towers High School, wrestled and was on the college’s track and field team. The newspaper said that  Mount Vernon Police Chief Calvin Burns related that with so many people at the party and such a mass disbursement, finding the shooter could be difficult.

On Sunday morning the college posted a note of condolence from President Steve Echols on its Facebook page. It read:

Please pray for the family of Stevenson Derival who passed away early this morning in a tragic off-campus incident. We are all shocked and broken-hearted to see a friend and student whose life held such promise to be cut short in such a devastating way.

May we all seek strength and comfort from the Lord Jesus who can give us sustaining grace when we face the deepest loss and grief.

Brewton-Parker College is one of three institutions of higher learning affiliated with the Georgia Baptist Mission Board. Other schools include Shorter University in Rome and Truett McConnell University in Cleveland.