Brewton-Parker wrestling shows out at Nationals

Freshmen Quentrivion Campbell, left, and Jordan Marshall, finished as All-Americans for Brewton-Parker at the NAIA Wrestling National Championshiops March 3-4. Entering as the 23rd-ranked squad in the country, the Barons would finish as No. 16. BPC ATHLETICS/Special
Posted Monday, March 20, 2017 10:50 am
Brewton-Parker College 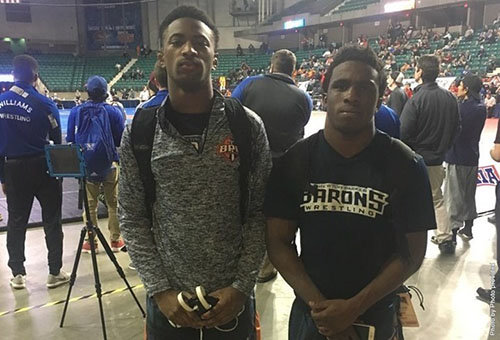 Freshmen Quentrivion Campbell, left, and Jordan Marshall finished as All-Americans for Brewton-Parker at the NAIA Wrestling National Championshiops March 3-4. Entering as the 23rd-ranked squad in the country, the Barons would finish as No. 16. BPC ATHLETICS/Special

TOPEKA, KS — Two freshman went beyond expectations for Brewton-Parker College in the NAIA Wrestling National Championships March 3-4, and in the process put other programs on notice about the Barons program.

With their team ranked No. 23 entering the competition, Jordan Marshall and Quen Campbell gritted their way to All-American recognition while placing in the Top 6. As a unit, BPC finished 16th in the nation.

"We had a great weekend at nationals. These guys had fire in their eyes and something to prove," commented head coach Tim Mitchem.

In the 133-pound division Marshall, a true freshman, finished 4th with a record of 4-2. Coming into nationals as the number 8 seed, he drew a bye in the opening round before winning his first match by pin over #9 Michael Andreano. Facing eventual national champion and top seed Jacob Colon from Grand View, Marshall fell short in losing by pin.

In the consolation round, Marshall won his next match against #6 Blayse Terukina to place in the top 8 and earn All-American status. His next victory came against #12 Joshua Crager by major decision of 13-4 before avenging an earlier loss at regionals to #3 Jake Sinkovics of University of the Cumberlands, winning by decision. However, in the third-place match the Miami, FL native came up just short, falling by a major decision of 12-2 to #4 David Berg of Midland.

From unseeded to All-American

In the 141-pound division, Quen Campbell finished 6th with a record of 5-3. Coming into nationals unseeded, Campbell won his opening match by fall against #9 Matt Landgraff. But, the true freshman out of Tift County fell in the next round to #8 Marcello Sierra of Lindenwood-Belleville. The loss by a major decision of 22-8 forced him into the consolation bracket. However, Campbell received a bye and defeated Christian Mesa of Hastings by decision, 9-5.

The 5'10" Campbell's next match made him an All-American with a victory by fall over #11 Nathan Ryan of Briar Cliff. Next up was #5 Shonn Roberts of Great Falls, who Campbell defeated by decision, 9-2. However, he came up just short in the next two matches, falling by a decision, 6-4, to top seed Tyler Fraley of Williams Baptist and again in the 5th place match against Kevin Kelly of Benedictine by decision, 7-6.

"We were not looked upon as one of the top programs going into this weekend, but the wrestling community knows us now," Mitchem added. "It was a nice surprise how these freshmen went out there like they had no care in the world. That is what I want to see. That's why these two freshmen became All-Americans. I'm looking forward to next year with the majority returning and some new faces. The future is bright for this team and program."

Said BPC Athletic Director Daniel Prevett, "Wrestling has become our brightest program in the last couple of years and they are set up for a promising future. Coach Mitchem does a great job getting his guys to buy into the underdog role. I'm very proud of the way these student-athletes represented Brewton-Parker and what we stand for."

Morton, Olson lead Braves to another easy win over Mets, 5-0