Cash on the highway, what would you do? 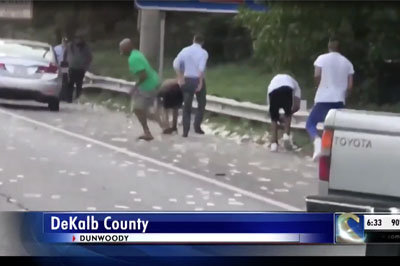 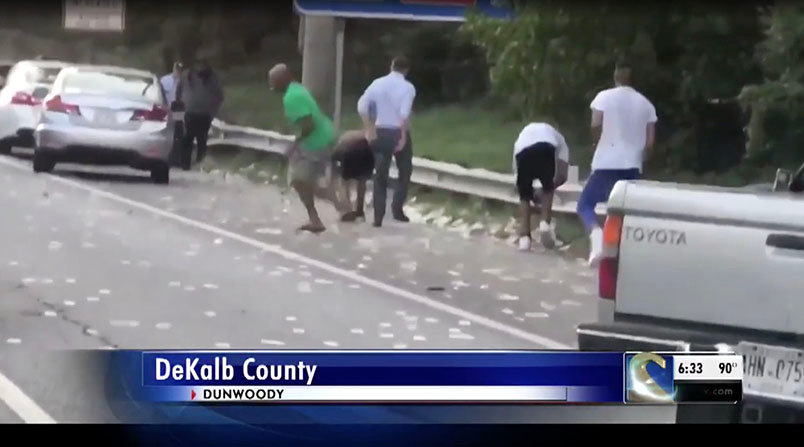 Motorists pull over to pick up money that had fallen out of an armored truck in Atlanta July 10. Screen grab courtesy WSB

I've written before about my experiences driving Atlanta's roads. It's including dodging mufflers and those more interested in their phone than the highway. I have avoided presidential motorcades and, thanks to a decision to drive backroads home, spending the night in my car (a friendly stranger took me in). More than once WSB Radio has notified myself and fellow drivers that the interstate has been shut down. At that time it's not unusual to put your car in park, turn it off, and stand outside on the road for no other reason than because you can.

This week, however, an armored car gave drivers on the northside perimeter near Ashford-Dunwoody Road a reason to slow down, even stop. A open door on the truck left approximately $175,000 in cash fluttering out. Video shows people pulling over for the unexpected cash-grab. Despite officials' requests to return the money – because, yes, it is stealing – only around $4,400 has been recovered.

I almost got to witness this firsthand. After meeting with some pastors in Statesboro, my phone suggested I head to northwest Georgia by way of I-20 and 285. Instead, I opted to go through Macon.

The story itself brought an interesting question: Would you have taken the money? And if you had, would you had returned it later? One driver who brought back $2,100 said he started thinking about the ramifications of not doing the right thing. Another man simply talked about how awful he felt that night, so he brought it to Dunwoody police.

As you'd imagine, the social media court of opinion ranged from "I'd never had taken it" to "finders keepers."

Everyone can understand the temptation. I can. However, Scripture addresses this in Proverbs several times:

The getting of treasures by a lying tongue is a fleeting vapor and a snare of death. (21:6)
Wealth gained hastily will dwindle, but whoever gathers little by little will increase it. (13:11)
Whoever is greedy for unjust gain troubles his own household, but he who hates bribes will live. (15:27)

No, money shouldn't govern us because, as we know, the love for it is the root of all evil (1 Timothy 6:10). That said, I don't think I've met the person who wouldn't like to have a little more. That purpose could be for themselves, sure. But I know plenty of folks who would quickly be getting it to an individual in need or ministry.

But money is a temptation. And many times the allure of attaining it quickly and easily has led to a downfall.

That principle doesn't stop with money. Setting goals is fun; reaching them is a different story. That process requires work and discipline. It requires sacrifice. My son is a pretty good soccer player, but he can get better. I'm currently working with him on the concept that the work to get better is often lonely and done when no one else is watching. It comes with a price.

Growing spiritually includes reading the Bible. Ask any churchgoer if that habit is important and he or she will say, "Yes." However, only a third of Protestant churchgoers actually do so each day. In that study, those age 50-64 were more likely (35%) to say they read the Bible daily than those below 50 (30%). And before us Southerners feel superior, just as many (31%) in the Midwest read Scripture daily and even more (37%) do so in the West.

It's in print and on our phone. There's really no reason to not read it, even a little, each day. But we're way more likely to scroll through Twitter than Titus, Facebook than Philippians.

Those tests for how we see the world and respond to principles revealed through the gospel and God's Word happen quickly. They can be in the form of 100s, 50s, and 20s falling across our windshield. Our response to those temptations reveal the status of our hearts and minds.

The work to respond the right way happens in those devotional times away from distractions. Yes, there is a cost in time to do it. But the cost of not doing so can be so much more.