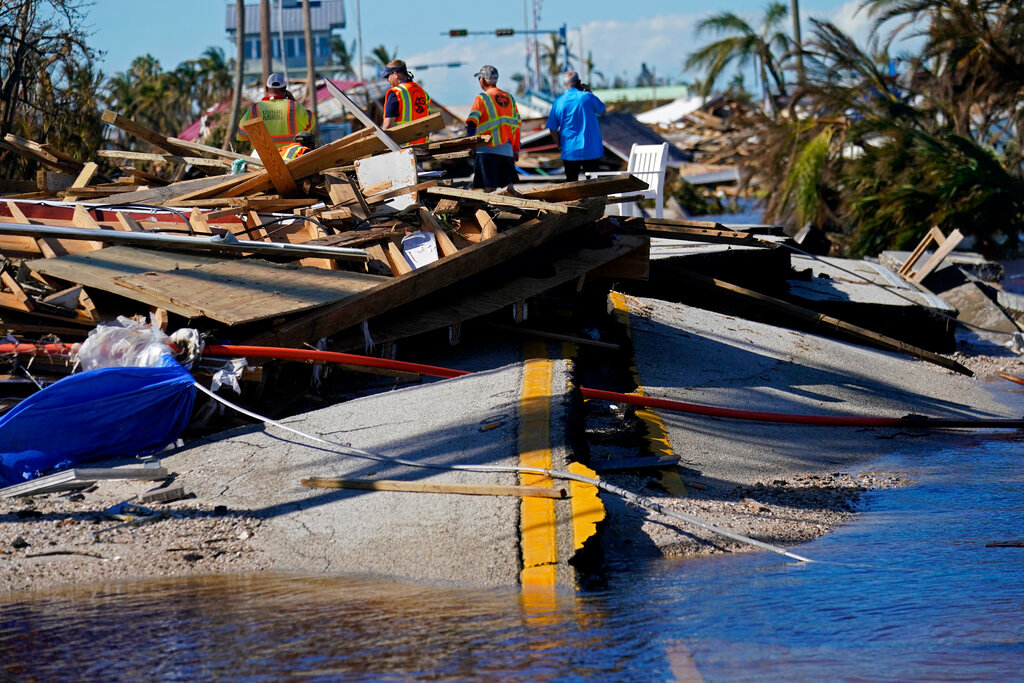 Responders survey damage to the bridge leading to Pine Island in the aftermath of Hurricane Ian in Matlacha, Fla., Sunday, Oct. 2, 2022. The only bridge to the island is heavily damaged so it can only be reached by boat or air. (AP Photo/Gerald Herbert)
Posted Monday, October 3, 2022 3:04 pm
By ROGER ALFORD, The Christian Index

SARASOTA, Fla. — With the skies cleared and the wind calmed, Georgia Baptists are arriving in hurricane-ravaged Sarasota to help residents with cleanup.

“It’s expected to be a long process,” said Georgia Baptist Disaster Relief director Dwain Carter. “We have about 60 people being deployed. We’ll have chainsaw crews and mud-out crews removing downed trees and cleaning up flooded homes.”

Problems created by Hurricane Ian last week in Florida continued into this week with widespread power outages and unabated floodwaters.

At least 78 people have been confirmed dead in the aftermath of Hurricane Ian, most of those in Florida. Four people died in North Carolina and three in Cuba.

Carter said Georgia Baptist Disaster Relief crews will set up a mobile kitchen specifically to feed volunteers who are helping Floridians get back into their homes. Additional Baptist crews from the Northeast, including from New York and New Jersey, will join the Georgians in Sarasota County.

“We’re expecting to be in the Sarasota area for three weeks, maybe longer,” Carter said. “We’re just not yet certain how long it will take.”

Travel is slow in Florida as people navigate around washed-out bridges and roadways that remain covered in water. Spotty cell and internet services have hampered communications in some of the hardest hit areas.

An estimated 600,000 homes and businesses in Florida remained in the dark on Monday morning. That’s down from 2.6 million customers immediately after Ian swept across the state.

“Everything we do for storm victims is free of charge,” Carter said. “Our main desire is to bring help, hope and healing to those who are having to deal with tragic situations.”

Churches and individuals can provide financial support to the work of Georgia Baptist Disaster Relief by visiting the Cooperative Program link on the gabaptist.org webpage.