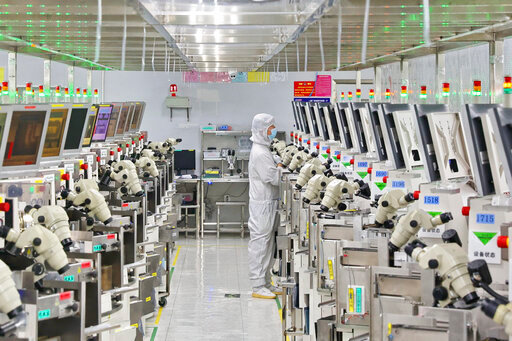 A monthly purchasing managers’ index released by business news magazine Caixin fell to 48.1 from August’s 49.5 on a 100-point scale on which readings below 50 indicate activity contracting. A separate PMI by an official industry group rose to 50.1 from 49.4.

“The surveys suggest that China's economy continued to lose momentum,” said Zichun Huang of Capital Economics in a report.

That adds to complications for Chinese leaders who are trying to reverse an economic slump after growth fell to 2.2% in the first six months of 2022, less than half the 5.5% official target.

Those efforts have been hampered by weak global and Chinese consumer demand and a slump in real estate activity caused by an official crackdown on the industry’s use of debt.

Caixin’s index of new export orders fell to a four-month low and the China Federation of Logistics & Purchasing said its separate index declined to 47 from 48.1. Both said measures of employment were in negative territory, showing companies cut jobs.

“We think the economy will remain weak heading into 2023," said Huang.