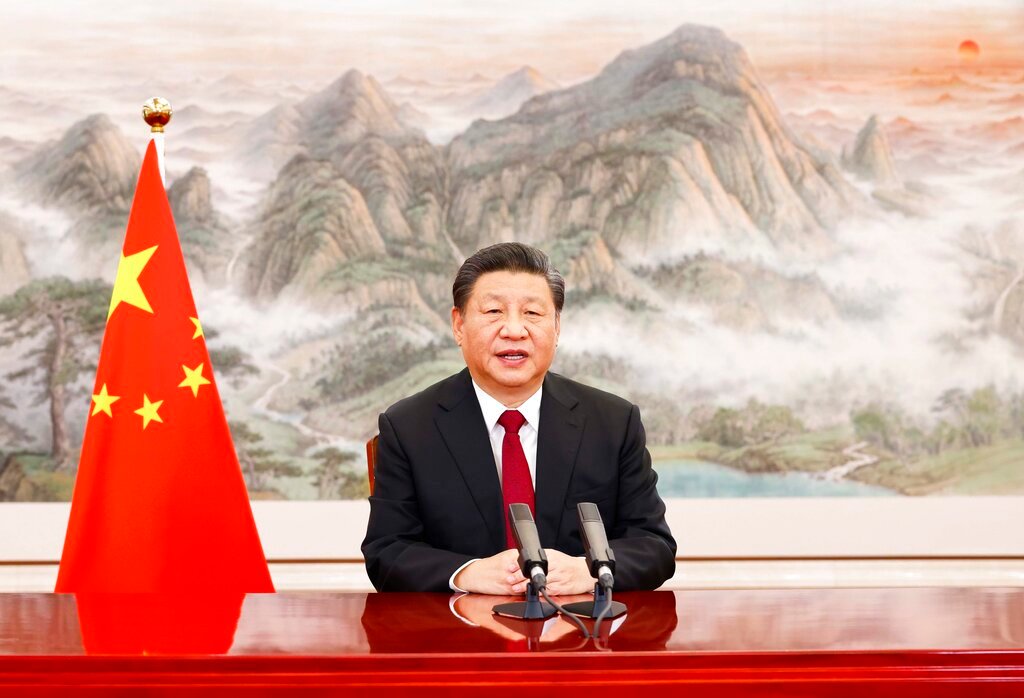 In this photo released by Xinhua News Agency, Chinese President Xi Jinping delivers a keynote address for the 2022 World Economic Forum virtual session in Beijing, Monday, Jan. 17, 2022. Xi called Monday for greater world cooperation against COVID-19 and pledged to send an additional 1 billion doses of vaccine to other countries, while urging other powers to discard a "Cold-War mentality" at a time of rising geopolitical tensions — a veiled swipe at the United States. (Huang Jingwen/Xinhua via AP)
Huang Jingwen
Posted Monday, January 17, 2022 11:37 am
By JAMEY KEATEN

GENEVA (AP) — Chinese President Xi Jinping called Monday for greater world cooperation against COVID-19 and pledged to send an additional 1 billion doses of vaccine to other countries, while urging other powers to discard a "Cold-War mentality” at a time of rising geopolitical tensions — a not-so-veiled swipe at the United States.

The Chinese leader touted his country's efforts to share vaccines, fight climate change and promote development at home and abroad as he delivered the opening speech of a virtual gathering hosted by the World Economic Forum. The online event is being held in place of its annual January meeting in Davos, Switzerland, because of health concerns linked to the coronavirus pandemic.

He touched on standard themes from his previous comments to international audiences, including responding to complaints by China’s trading partners by promising to open its state-dominated economy wider to private and foreign competition.

His comments come as tensions between the United States and China have simmered on dossiers as diverse as Taiwan, intellectual property, trade, human rights and the South China Sea.

“We need to discard Cold War mentality and seek peaceful coexistence and win-win outcomes. Our world today is far from being tranquil,” said Xi, through a translator. "Protectionism and unilateralism can protect no one. They ultimately hurt the interests of others as well as one’s own. Even worse are the practices of hegemony and bullying, which run counter to the tide of history.

“A zero-sum approach that enlarges one’s own gain at the expense of others will not help,” he added. "The right way forward for humanity is peaceful development and win-win cooperation.”

Xi, who hasn’t left China since the coronavirus emerged in early 2020, said China had already sent abroad more than 2 billion doses of its COVID-19 vaccines and plans to provide an additional 1 billion, including a donation of 600 million doses to Africa and an extra 150 million to Southeast Asia.

By comparison, managers of the U.N.-backed COVAX program to ship vaccines to developing countries announced over the weekend that it has now delivered 1 billion vaccine doses.

Xi said China “stands ready to work with” other governments on climate but announced no new initiatives and offered no resources. He said it was up to developed countries to provide money and technology.

The Chinese leader repeated official promises that the Communist Party will open the state-dominated Chinese economy wider. The ruling party has taken steps over the past five years, including ending ownership restrictions in its auto industry, but business groups say foreign banks, technology and other companies still face restrictions that limit access to the most promising industries.