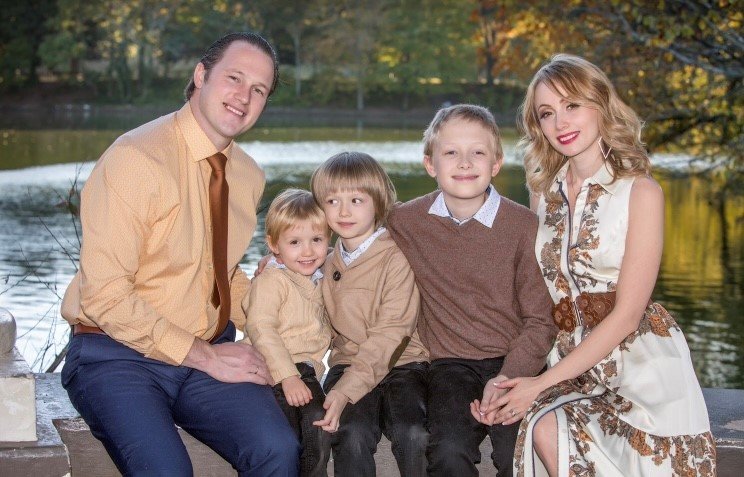 Pastor Andrew Mineev with his sons, left to right, Matthew, Mark and Samuel, and his wife, Oxana 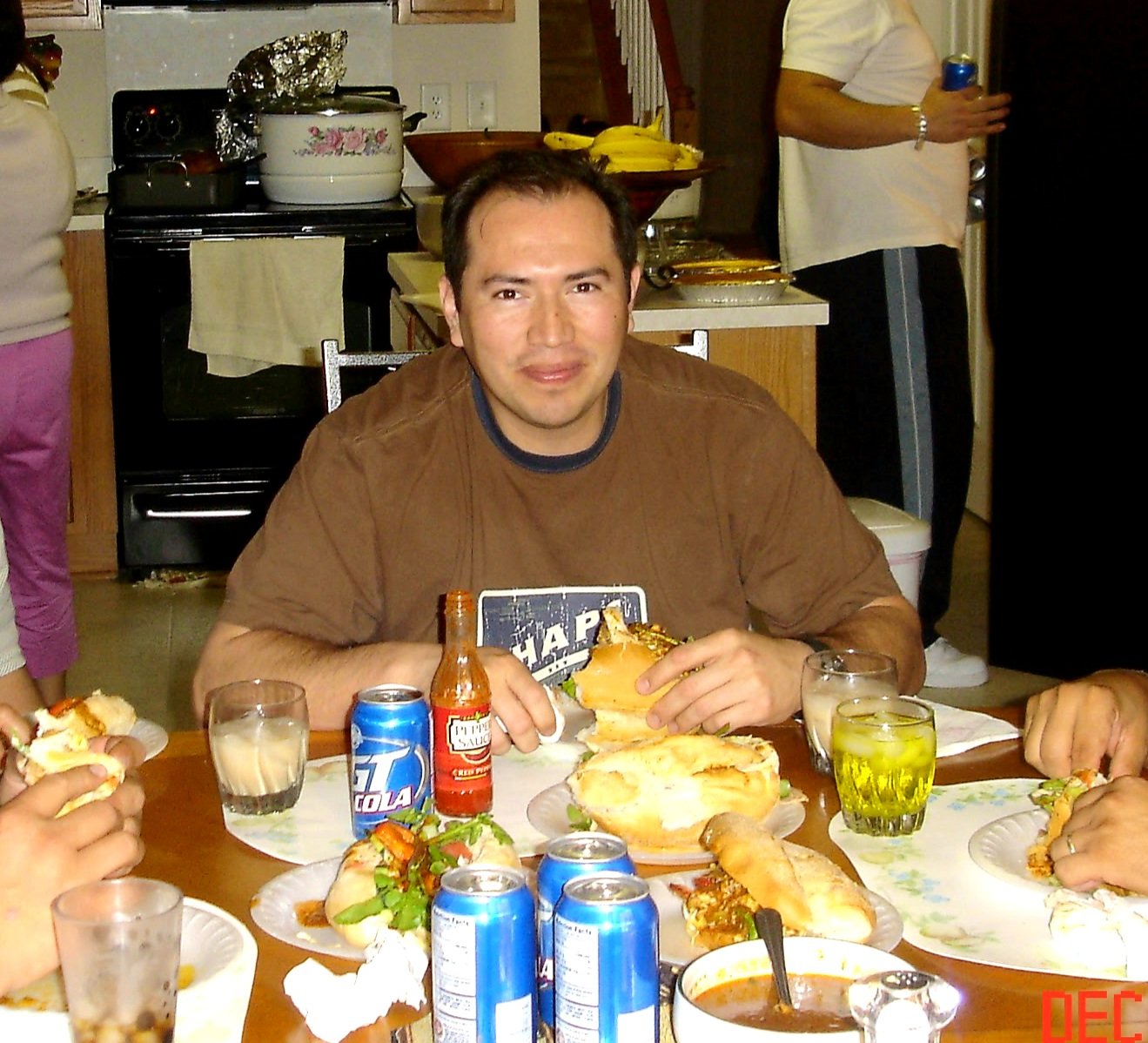 Pastor Rafael Valter is enjoying his Panes con Chumpe, a Salvadoran speciality during the Christmas season. 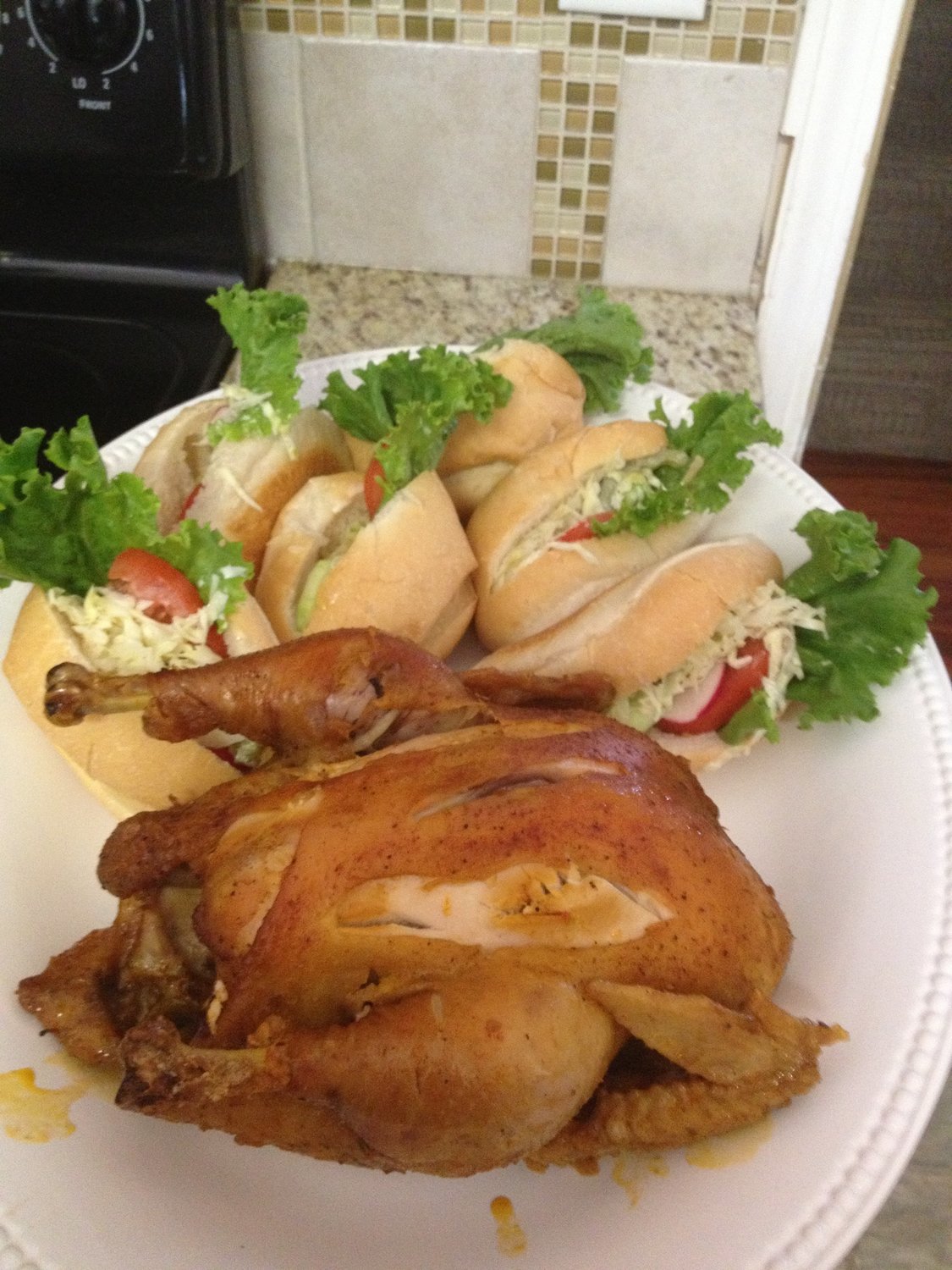 Turkey is a staple of the Christmas season, especially when it's served in sandwiches. 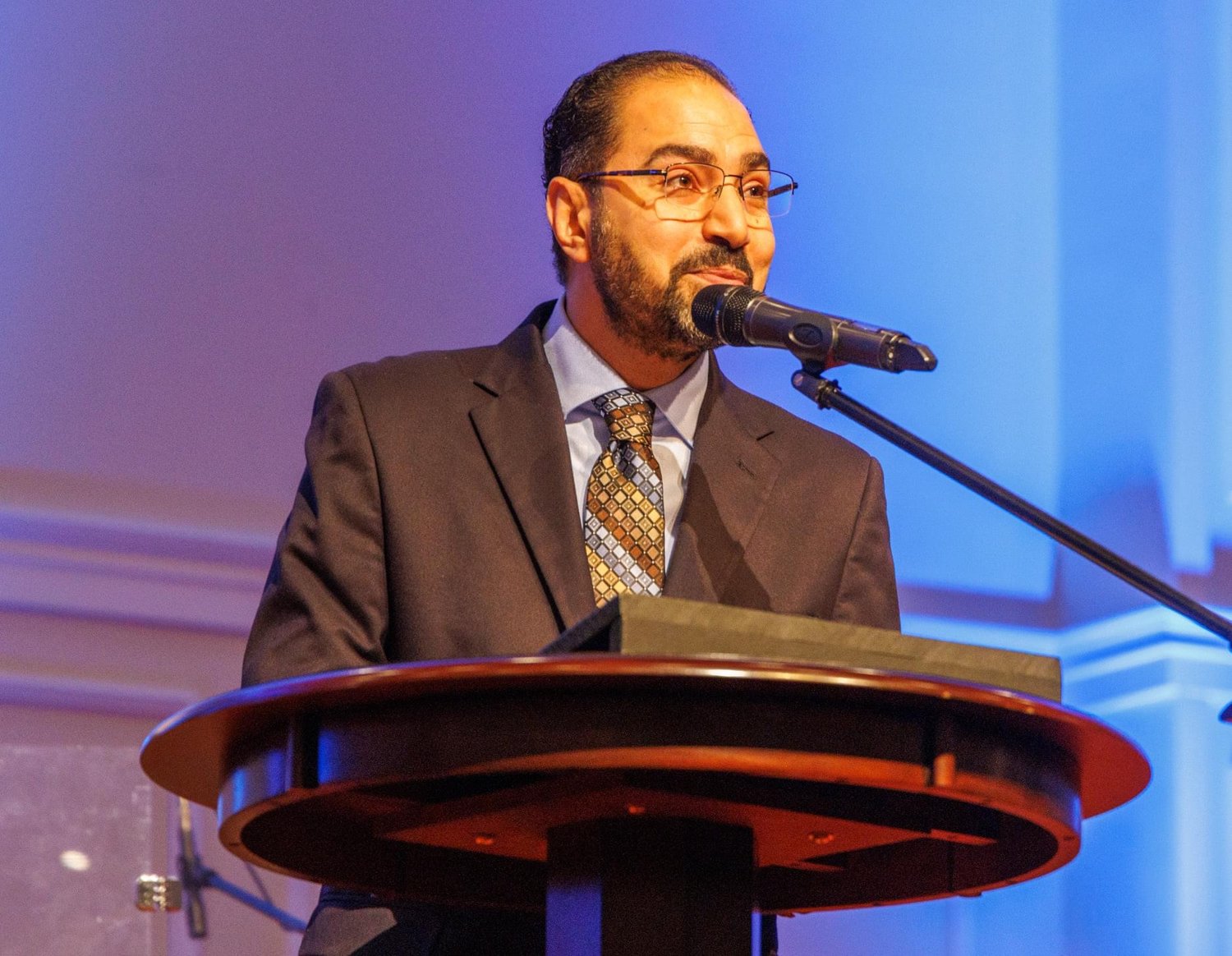 Pastor Mokhles Hanna of the Light of the World Arabic Church exhorts his congregation to worship the virgin born Christ. 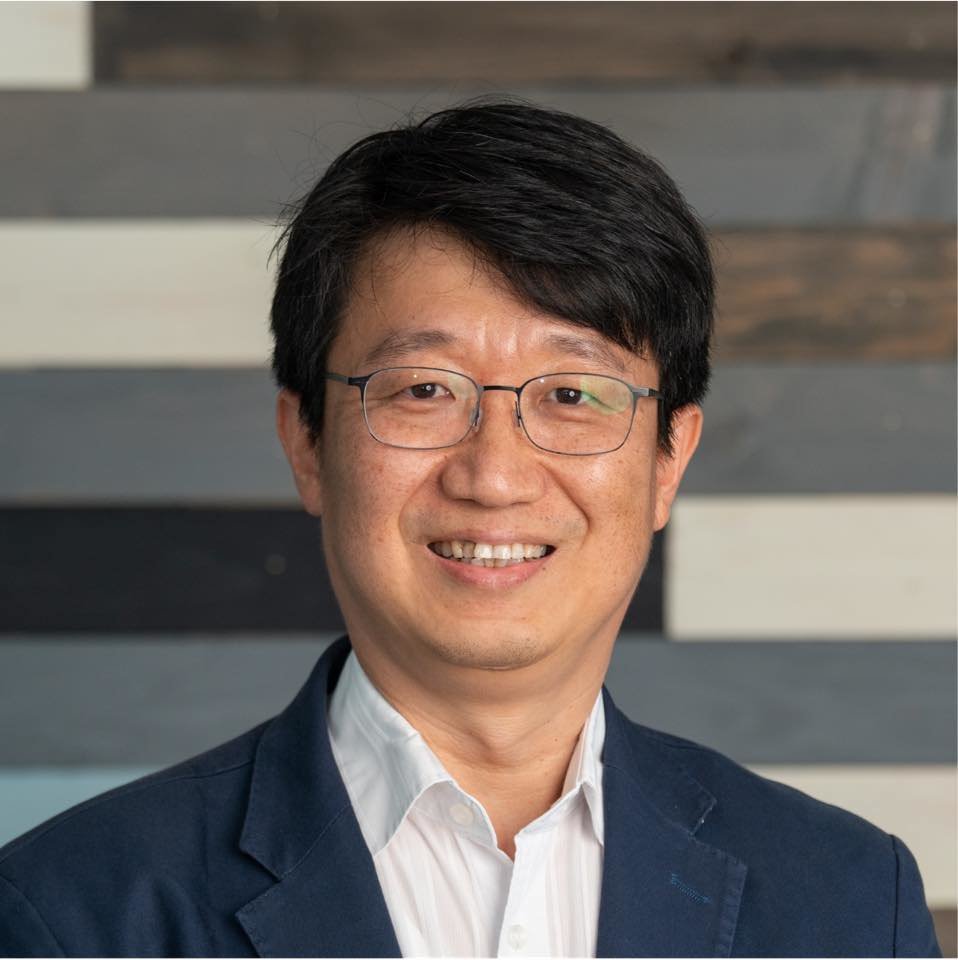 Daniel Chon is pastor of the Macon Korean Baptist Church. 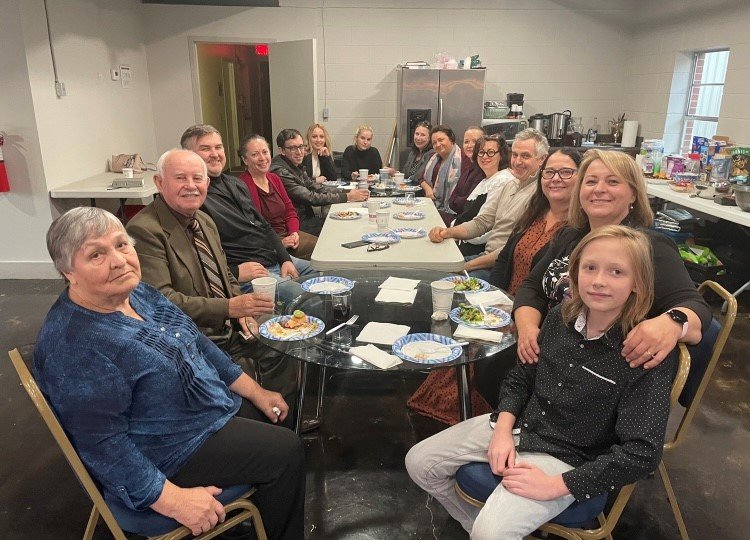 The Ark of Salvation Church fellowship enjoys meals after each service at Macland Baptist Church
Previous Next
Posted Tuesday, December 7, 2021 9:14 am
By J. GERALD HARRIS, The Christian Index

The Georgia Baptist Convention is comprised of 3,491 churches and missions that worship in 27 languages every Lord’s Day. These churches touch the lives of people from five continents: North America, South America, Africa, Europe, and Asia. Some of these special ethnic and language groups have their own unique Christmas celebrations.

Mokhles Hanna is the pastor of Jesus the Light of the World Arabic Church, one of eleven ethnic churches connected to the mission’s ministry of the First Baptist Church of Lilburn. This church’s observance of Christmas is special because they come from the cradle of Christianity itself and will likely have people from Bethlehem in their congregation when they celebrate the advent of our Lord this month.

While Pastor Hanna is from Egypt the church is made up of Palestinian, Jordanian, Syrian, Iraqi, Lebanese, Moroccan and Egyptian Christians. While the Coptic Church and many Orthodox Christians in the Middle East celebrate Christmas on January 7, the Arabic Church in Georgia will gather on December 19th to have a candlelight worship service in advance of their Christmas celebration on December 25th.

Pastor Hanna will bring a Christmas message, the music will be presented by a special choir and there will be a lavish, smorgasbord meal with dishes from all the nations represented in the Jesus the Light of the World Arabic Church. However, some of the members of Pastor Hanna’s church will visit either the Coptic Church in Roswell or the one in Gwinnett County on January 7th to lengthen and enhance their observance of Christmas.

“We are thankful for the freedom we have to worship here in America,” stated Pastor Hanna, “because in the predominantly Muslim countries of our origin Christmas is not as visible and we are not as free to celebrate the coming of our Savior in those countries as we are in America.”

Rafael Valter, pastor of Iglesia Bautista Agape in Stone Mountain and one of the newly elected vice presidents of the Georgia Baptist Convention, is a native of El Salvador, a nation full of Christmas customs and traditions. Family gatherings, cooking unique foods, setting off fireworks, creating nativity scenes and celebrating Christmas on December 24th at midnight are all a part of the traditions held dear by the Salvadorans.

“Since we do not have a Thanksgiving Day in El Salvador, turkey is the main dish for Christmas,” explained Valter. “And the most traditional thing related to the turkey comes after Christmas dinner. Due to its large size, there are always turkey leftovers which become the primary ingredients for the ‘Pan con Chumpe’ (Bread with turkey).

“The Spanish word for turkey is actually ‘pavo’, but in El Salvador we call the turkey ‘Chompipe’ or ‘Chumpe’ instead, and both words are registered in the Royal Spanish Academy of Language as colloquialisms.”

Valter continued, “The ‘Panes con Chumpe’ are made with large French bread that is split in half and filled with lettuce, tomato slices, radish slices, watercress leaves and a cabbage salad with carrots, that is prepared in different ways. Finally, some strips of turkey are put on top, and the whole thing is bathed with turkey sauce.

“Another traditional Salvadoran Christmas food is ‘Tamales de Gallina India’ (Indian Hen Tamales). The Indian Hen is an organic Hen.” Valter explained, “I grew up knowing about Indian Hen Soup and Tamales. The difference between the Farm Chicken and the Indian Hen, is that the Indian Hen is home raised, slim and muscular.”

Valter concluded, “The Tamale dough is made of corn with many ingredients, each family has a different recipe. I wanted to get our family's recipe to publish it in this article, but after much discussion with the women of the house, I can only say that it was not possible. In addition to the Hen, the Tamales are filled with potato wedges, green beans, chickpeas, and seedless green olives. The tamales are tightly wrapped in banana leaves, and then wrapped with tin foil on top of it. Finally, they are boiled in large pots filled with water until fully cooked.”

Daniel Chon, pastor of the Korean Baptist Church in Macon, declares that the people of Korea knew very little about Christmas until Christian missionaries from Western countries introduced them to the story of Christ’s advent at the beginning of the 20th century. Today about 30 percent of the South Korean population is Christian, so Christmas (Sung Tan Jul) is celebrated by Christian Korean families, and it has become a national holiday even though South Korea is officially Buddhist.

As one might guess, Christmas is banned in North Korea, but South Korean Christians celebrate Christmas in the way the holiday is celebrated in the West, but with a greater emphasis on the Christian aspect of the special day and a minimal emphasis on shopping and exchanging gifts.

One of the most cherished memories Pastor Chon has of his years in South Korea is the singing of Christmas carols. While many of the carols are like the carols sung by Christians in the West, some of the carols are written and sung to remind the recipients of the carols as to how much they are loved or missed at this special time of the year.

Most countries have some version of Santa Claus during the Christmas season. There are the English versions of Kris Kringle, and Father Christmas, plus Pere Noel (French), Weihnachtsmann (German), Babbo Natale (Italian), etc. The Ded Moroz or Russian Father Frost fairytale long ago became the symbol of the Russian winter but was banned by some of the countries in Eastern Europe after they gained their independence, but currently children’s presents are delivered by Mos Craciun – who looks remarkably like our Santa Clause.

Andrew Mineev, a native of Moldova, is the pastor of the Russian Ark of Salvation Church which meets each Sunday in the facilities of the Macland Baptist Church in Powder Springs.  Christmas was practically lost to the Russian culture for almost three generations. Because of the Communist regime, there was no official Christmas holiday in Russia between 1925 and 1992.

In 1918 Soviet Russia, under the leadership of Vladimir Lenin, adopted the Western Gregorian calendar which has Christmas falling on December 25th. However, the Orthodox Church in Russia like the Orthodox churches in the Middle East (mentioned above) celebrates Christmas on January 7th as specified in the Julian calendar. However, according to Mineev, most Russian speaking Baptists celebrate Christmas on December 25.

Pastor Mineev added, “On December 24 the Baptists of Moldova and Eastern Europe gather in caroling groups to go to homes in the cities and villages to sing familiar Christmas songs like Silent Night and O Little Town of Bethlehem, accompanied by accordions, guitars and musical triangles. They begin their caroling at 10:00 P.M. and often sing until daybreak. They are often rewarded for their efforts by gifts of candy, cookies and fruit.”

The Ark of Salvation Church pastor explained, “New Years is also important for Russian speaking Baptists. We typically gather at the church on New Year’s Eve and pray into the New Year followed by a worship service at 9:00 A.M. to get the year started off by honoring the Lord.” The worship services are generally followed by a fellowship meal typically featuring Russian cuisine.

The numerous language and ethnic groups in the Georgia Baptist Convention may have their own traditions and customs and there may be different nuances and various refinements about how they celebrate Christmas, but it is encouraging to know that each group has a strong commitment to the Biblical truth of the Incarnation and that we all worship the Christ who is characterized by a virgin birth, a virtuous live, a vicarious death and a victorious resurrection.