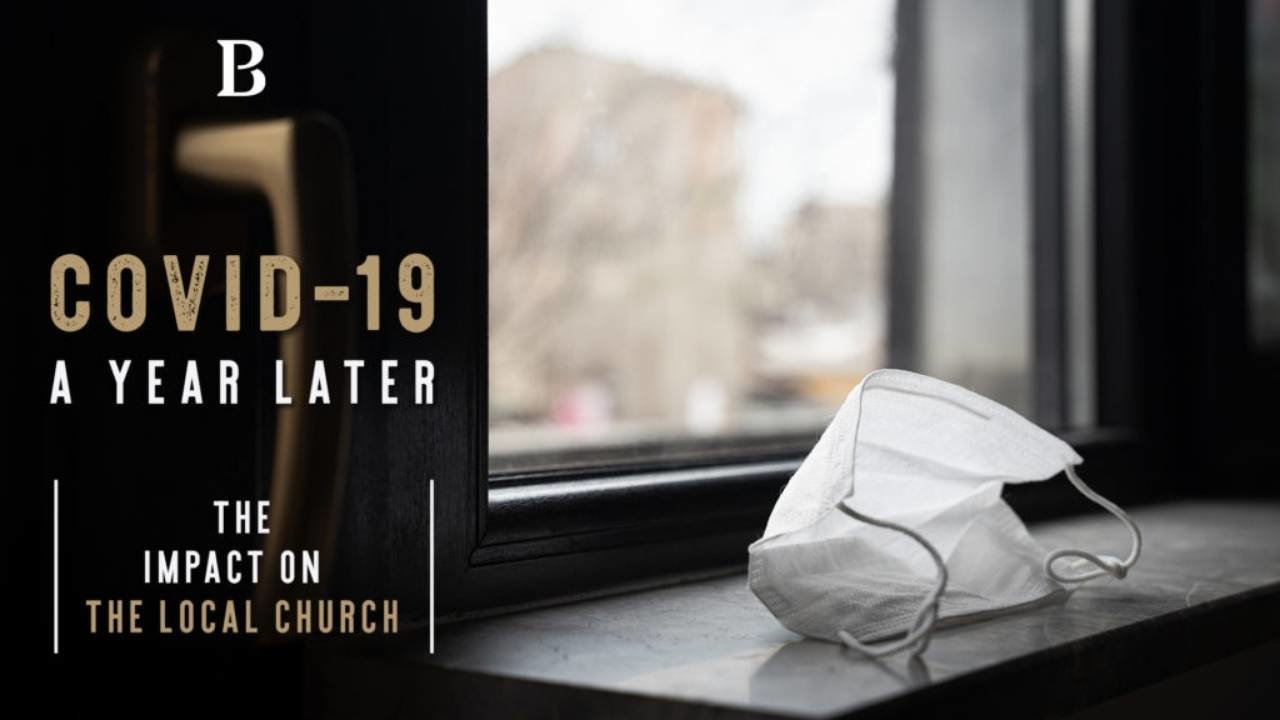 NASHVILLE – The economic fallout of COVID-19 among churches, it turns out, wasn’t as bad as anticipated. Nevertheless, the pandemic left an imprint on many budgets and current as well as future ministry plans.

By the end of March 2020, only 7 percent of churches were meeting in person. That trend, according to Lifeway Research, continued into April as congregations celebrated Easter from their homes. And in a year of new norms, the summer slump was replaced with reunions as many churches began to venture into holding socially distanced gatherings where masks were recommended if not required.

Anecdotes reflect months when financial gifts depended largely on a variety of factors, such as the availability of an online tithing option and COVID’s impact on the local economy. From February through December, for example, Idaho and Utah were among the leaders in economic recovery and even added jobs. Meanwhile in Hawaii, where the hospitality industry came to an abrupt stop, more than 89,000 jobs (13.6 percent) were lost.

Last year Central Valley, long a stalwart in international missions involvement, had to cancel trips to Mexico and Thailand but still gave $63,354.55 to the LMCO.

“We praise God for such generosity and celebrate all that God is doing through CVBC and the thousands of Southern Baptist churches like them to ensure that more people around the world hear the Gospel,” International Mission Board President Paul Chitwood said.

In terms of attendance, few churches were back to pre-COVID levels by October. In discussions with Baptist Press, associational missionaries, pastors and convention leaders generally placed the attendance drop at approximately 20 percent. 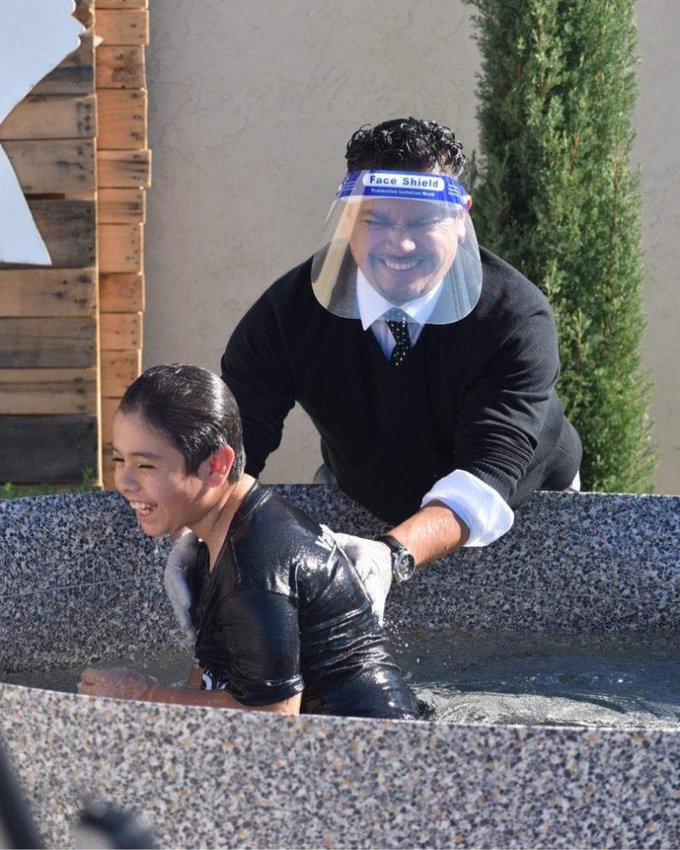 Pastor Johnny Tec of Primera Iglesia Bautista de San Ysidro, one of the churches in the San Diego Southern Baptist Association, baptizes a new believer in Christ. Although COVID restrictions have provided challenges, Southern Baptists have continued throughout the last year to continue reaching others.

“It was tough at first,” said Mike Carlisle, director of missions for the San Diego Southern Baptist Association. “April, May and June brought a real downturn financially. Churches were bewildered and sort of froze in their giving, which affected the association. But come August through October we made up for it and finished 2020 on budget.”

California’s COVID-19 regulations, among the most stringent in the nation, added to the challenges brought by the pandemic.

“Churches are currently allowed to meet with 25 percent occupancy,” Carlisle said. “That, of course, includes social distancing, masks and no singing.”

On-stage worship leaders are allowed to sing without a mask as long as they are at least 12 feet away from congregants. “Any closer and they have to put on a mask,” Carlisle said.

Hillcrest Baptist Church in Country Club Hills, Ill., resumed in-person gatherings in September with limited seating and masks, but then hit pause again in November following a nationwide spike in cases. The congregation outside of Chicago is planning to gather again onsite for Palm Sunday, Senior Pastor Adron Robinson said.

“COVID definitely forced us to pivot in about everything we do,” he said. “But God has been tremendously faithful. Financially, we didn’t miss a beat and have even been exceeding in some areas.”

Pre-COVID, Hillcrest had never utilized online worship even as a companion to its regular services. Church staff had to make that adjustment mid-week a year ago, Robinson said.

“We went from 275 in two services on Sunday to one online service. However, for six months we had been providing an online giving option. Only around 20 percent of the church was using it, but that went up to 90 percent afterwards,” he said.

In addition to providing counseling services, Hillcrest has been distributing food boxes for the community from its parking lot. That outreach, Robinson said, has given members not only a chance to minister but also the much-appreciated opportunity to interact with each other in person. 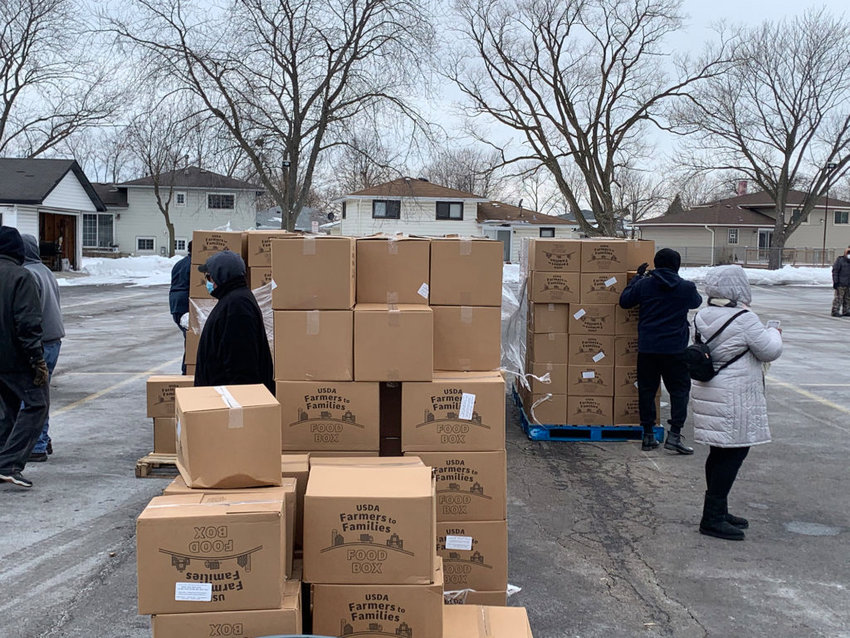 Though Hillcrest Baptist Church has met in person only a few times in the past year, its ministry to the community has continued. Here, church members set up in the church parking lot to distribute food provided by the USDA’s Farmers to Families program. Submitted photo

The Colorado Baptist General Convention also made budget for the year. Charles Boswell, the convention’s director of church health and pastoral care, said budgetary changes at the state level joined other efforts to make that possible.

“Legacy and established churches were more successful than church plants and newer churches [in continued giving],” he said. “Pastors have also cut staff and made the necessary changes to meet budget.”

Although national Cooperative Program giving for the 2019-2020 fiscal year ending last September lagged slightly below the allocation budget and the previous year’s total, a dip of less than 2 percent on both accounts was a testimony to the faithfulness of Southern Baptists throughout the pandemic. Altogether, Southern Baptist churches still gave more than $192.9 million toward national and international missions and ministries.

Rob Rhew, pastor of Ringgold Baptist Church in Griffin, Ga., said while some numbers were down, there was plenty to celebrate.

“Financially, we exceeded my expectations,” he said. “I thought giving would go down, but to my surprise it held steady in a traditional church without online or push pay options!

“Attendance is about 65-70 percent of what we had before Covid. I’m actually excited as this has provided opportunity to examine what we have been doing traditionally and the fresh attitudes of embracing change.”

Another Peach State pastor, John Hull of Eastside Baptist Church in Marietta, said the downturn in the economy led to “painful, hard decisions” regarding church staff. But Eastside continued in local ministry such as being part of a wide-scale food distribution effort through the Noonday Baptist Association. Its partnership with a nonprofit organization also helped eliminate $2.9 million in medical debt for families.

“Our view was that we had no idea where COVID was going to take us or how long it would last,” Hull said. “We were nevertheless going to continue to do ministry and be good stewards. We’ve seen an uptick in attendance lately and are encouraged by that.”

Among those were actions by Congress, the Federal Reserve, and the Paycheck Protection Program through the Small Business Administration. Church members also believed the shutdown would be relatively short-lived instead of lasting a year or more. And in an example of absence making the heart grow fonder, congregants rallied in their temporary digital existence, quickly accepting online tithing methods as a way to support their church’s ministries.

But Rainer warned that the overall economic effects of 2020 will stretch into 2021. One way to meet those challenges is to adjust budgets accordingly. If churches are experiencing a 20 percent decline in attendance, for example, he suggested lowering the budget by the same amount.

“Currently, we estimate over half of churches are experiencing giving challenges,” Rainer wrote. “Far too few churches are preparing for what could be a rocky 2021. While the latest reports about vaccine effectiveness are good signs, the reality is much of the economic damage is already done and will affect churches in the coming year.”

As Rainer urged, churches need to be prepared. But even more important, they need to be faithful.

Last June staff members at First Baptist in Helen, Ga., were locked into a discussion over finances. It wasn’t so much for their own sake, though. Pastors they support in Kenya needed help. So did a local counseling ministry, as did students preparing for a future in missions.

When a knock on an exterior door interrupted their meeting, Student Pastor Jeff Ford answered and was greeted by a young woman extending an envelope. She explained that she and her husband had been watching First Baptist’s online services and felt God wanted them to give this gift.

Moments later the staff would learn the envelope contained $10,000 in cash. Within 30 minutes, every dollar had been earmarked for those ministries they had been discussing.

“It was all so providential,” Henry said. “Our hearts were burdened for these ministries and in came a sacrificial offering that allowed us to flesh it out. It’ll go down for all of us as one of those moments where God knew where we were and what we were going through and gave us some seed money.”

That heart was reflected in the church’s own budget, as for the first time in its history annual giving surpassed $1 million. Already, the pace for 2021 is well ahead of 2020’s.

“One of the early concerns during the shutdown was how it would not only affect finances, but our sense of community,” Holmes said. “But we’ve seen both flourish.

“We began to intentionally do things like making visits, phone calls and other ways of gathering together safely. We took those for granted before. The giving was a byproduct of the spiritual maturity of our people and it took COVID to show that. We went from giving faithfully to giving sacrificially.

“I’ve been here for 21 years, and it’s one of the most exciting times I can remember.”