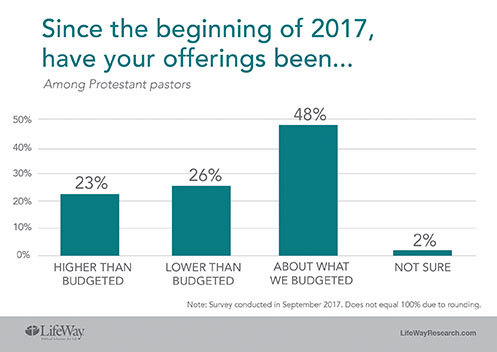 About 40 percent of Protestant pastors say their churches received more offerings in 2017 than in 2016.

And only about a third say the economy gave their church trouble.

Those are among the findings of a new report from LifeWay Research, based on a survey of 1,000 Protestant senior pastors. LifeWay Research has tracked the impact of the economy on churches since 2009, said Scott McConnell, executive director, and this is the first time the majority of pastors said the economy isn’t troubling their church.

“The past decade has been difficult for many church budgets,” said McConnell. “But things seem to be looking up.”

Few worried about the economy

At the height of the Great Recession in 2010, LifeWay Research found most pastors (80 percent) said the economy had a negative effect on the church budget. That dropped to 51 percent by March 2016.

In the most recent survey – from the fall of 2017 – 35 percent of pastors say the economy has a negative impact on the church. Seventeen percent cite a positive impact, and 45 percent say no impact. 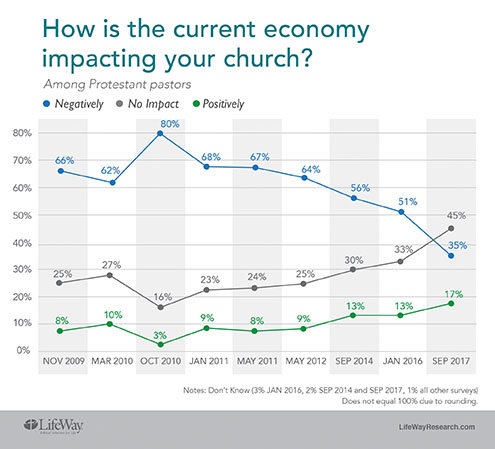 African-American pastors (41 percent) are more likely to say giving is under budget than white pastors (26 percent).

Still, churches seem to be regaining their footing as the economy improves, McConnell said.

“Overall, 2017 was a good year for church budgets,” he said. “Except for isolated local downturns, the financial struggles of churches not meeting budget likely have nothing to do with the overall economy.”