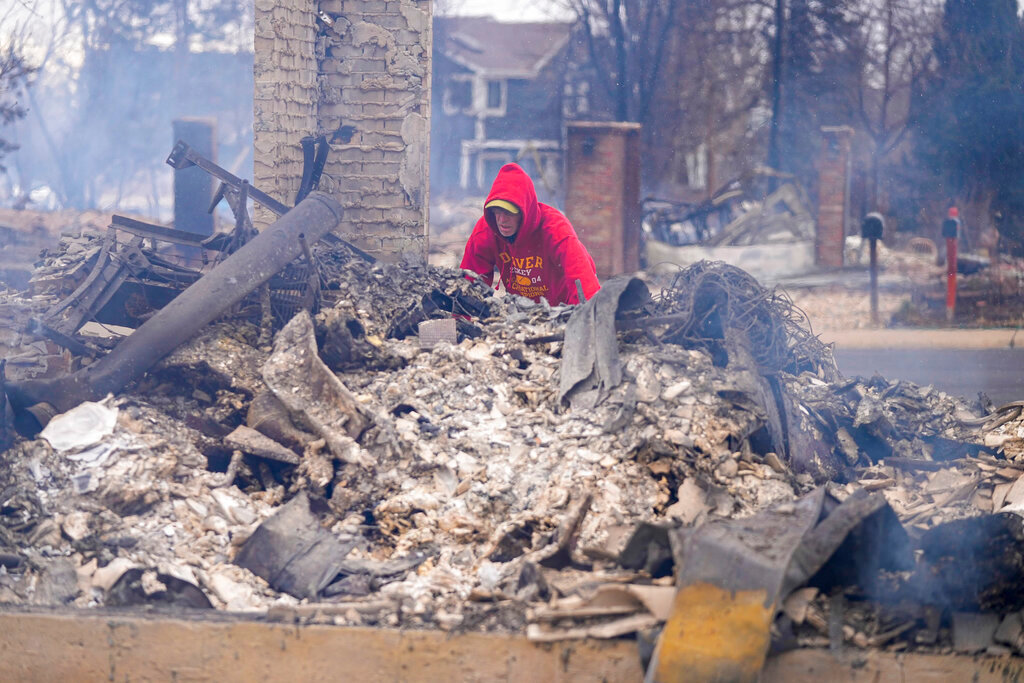 Todd Lovrien looks over the fire damage from the Marshall Wildfire at his sisters home in Louisville, Colo., Friday, Dec. 31, 2021. Tens of thousands of Coloradans driven from their neighborhoods by a wind-whipped wildfire anxiously waited to learn what was left standing of their lives Friday as authorities reported more than 500 homes were feared destroyed. (AP Photo/Jack Dempsey)
Jack Dempsey
Posted Saturday, January 1, 2022 10:19 am
By BRITTANY PETERSON and EUGENE GARCIA, Associated Press

SUPERIOR, Colo. (AP) — A Colorado official says nearly 1,000 homes were destroyed, hundreds more were damaged, and three people are missing after a wildfire charred numerous neighborhoods in a suburban area at the base of the Rocky Mountains.

Boulder County Sheriff Joe Pelle also said Saturday that investigators are still trying to find the cause of the wind-whipped blaze that erupted Thursday and blackened entire neighborhoods in the area located between Denver and Boulder.

Pelle said utility officials found no downed power lines around where the fire broke out. He said authorities were pursuing a number of tips and had executed a search warrant at “one particular location.” He declined to give details.

A sheriff’s official who declined to provide his name confirmed that one property was under investigation in Boulder County’s Marshall Mesa area, a region of open grassland about 2 miles (3.2 kilometers) west of the hard-hit town of Superior. A National Guard Humvee blocked access to the property, which was only one of several under investigation, the official said.

Officials had previously estimated that at least 500 homes — and possibly 1,000 — were destroyed in the fire, which by Friday was no longer a threat. Residents have slowly started returning to see the scale of the devastation.

Authorities had said earlier no one was missing. But Boulder County spokesperson Jennifer Churchill said Saturday that was due to confusion inherent when agencies are scrambling to manage an emergency.

Pelle said officials were organizing cadaver teams to search for the missing in the Superior area and in unincorporated Boulder County. The task is complicated by debris from destroyed structures covered by 8 inches (20 centimeters) of snow dumped by a storm overnight, he said.

At least 991 homes were destroyed, Pelle said: 553 in Louisville, 332 in Superior and 106 in unincorporated parts of the county. Pelle cautioned that the tally was not final.

At least seven people were injured in the wildfire that erupted in and around Louisville and Superior, neighboring towns about 20 miles (32 kilometers) northwest of Denver with a combined population of 34,000. It burned at least 9.4 square miles (24 square kilometers).

The snow and temperatures in the single digits cast an eerie scene amid still-smoldering remains of homes. Despite the shocking change in weather, the smell of smoke still permeated empty streets blocked off by National Guard troops in Humvees.

The conditions compounded the misery of residents who started off the new year trying to salvage what remained of their homes.

Utility crews struggled to restore electricity and gas service to homes that survived, and dozens of people lined up to get donated space heaters, bottled water and blankets at Red Cross shelters. Xcel Energy urged other residents to use fireplaces and wood stoves to stay warm and keep their pipes at home from freezing.

Families filled a long line of cars waiting to pick up space heaters and bottled water at a Salvation Army distribution center at the YMCA in Lafayette, just north of Superior.

Monarch High School seniors Noah Sarasin and his twin brother Gavin had been volunteering at that location for two days, directing traffic and distributing donations.

“We have a house, no heat but we still have a house,” Noah Sarasin said. “I just want to make sure that everyone else has heat on this very cold day.”

Hilary and Patrick Wallace picked up two heaters, then ordered two hot chocolate mochas at a nearby cafe. The Superior couple couldn’t find a hotel and were contemplating hiking 2 miles (3.2 kilometers) back to their home; their neighborhood was still blocked off to traffic. The family slept in one room on New Year’s Eve.

Both teared up when a man entered the shop and joked aloud that he'd lost his coffee mugs — and everything else — in the fire. The man was in good spirits, laughing at the irony of the situation.

“I have a space heater and a house to put it in. I don’t even know what to say to them,” Hilary said, wiping away a tear.

Superior resident Jeff Markley arrived in his truck to pick up a heater. He said he felt lucky to be “just displaced” since his home is intact.

“We’re making do, staying with friends, and upbeat for the new year. Gotta be better than this last one,” Markley said.

Not everyone felt as positive.

“It’s bittersweet because we have our house, but our friends don’t. And our neighbors don’t,” said Louisville resident Judy Givens as she picked up a heater with her husband. “We thought 2022 might be better. And then we had omicron. And now we have this, and it’s not starting out very well.”

Dozens trudged through the snow to determine the condition of their homes and take belongings.

Viliam Klein bent over in grief when he saw the ruins of his 100-year-old home in Superior for the first time Saturday. Smoke rose through the snow-covered ashes; a few neighbors walked past, carrying what they could from their own destroyed homes.

“At this point I’m just honestly overwhelmed and I can’t feel much anymore,” Klein said. He sifted pieces of ash with his hands; wisps of smoke rose from his glove-covered palms. He surveyed what remained of the neighborhood.

“You know the kids’ playground is just down the street over there. And I can buy new books. I can buy new furniture. But it’s really hard to build back a community and friends and a social network like that,” Klein said. ““I’m sad for my kids that they’re gonna lose all this. I’m sad for everybody else’s kids.”

Donna O’Brien bundled up with her son Robert to make the 1.5-mile (2.4-kilometer) trek to check on their home. “I think we’re still in kind of shock,” she said. “This is our neighborhood and it happens everywhere else, but it’s not supposed to happen where you live.”

The wildfire broke out unusually late in the year, following an extremely dry fall and amid a winter nearly devoid of snow until the overnight snowfall. High winds pushed flames that fed on bone-dry grasses and vegetation on farmland and open spaces interspersed with suburban subdivisions.

Ninety percent of Boulder County is in severe or extreme drought, and it hadn’t seen substantial rainfall since mid-summer. Denver set a record for consecutive days without snow before it got a small storm on Dec. 10, its last snowfall before the wildfires broke out.

“It didn’t snow all winter of 2021. No wonder this all went up like kindling,” Klein said.