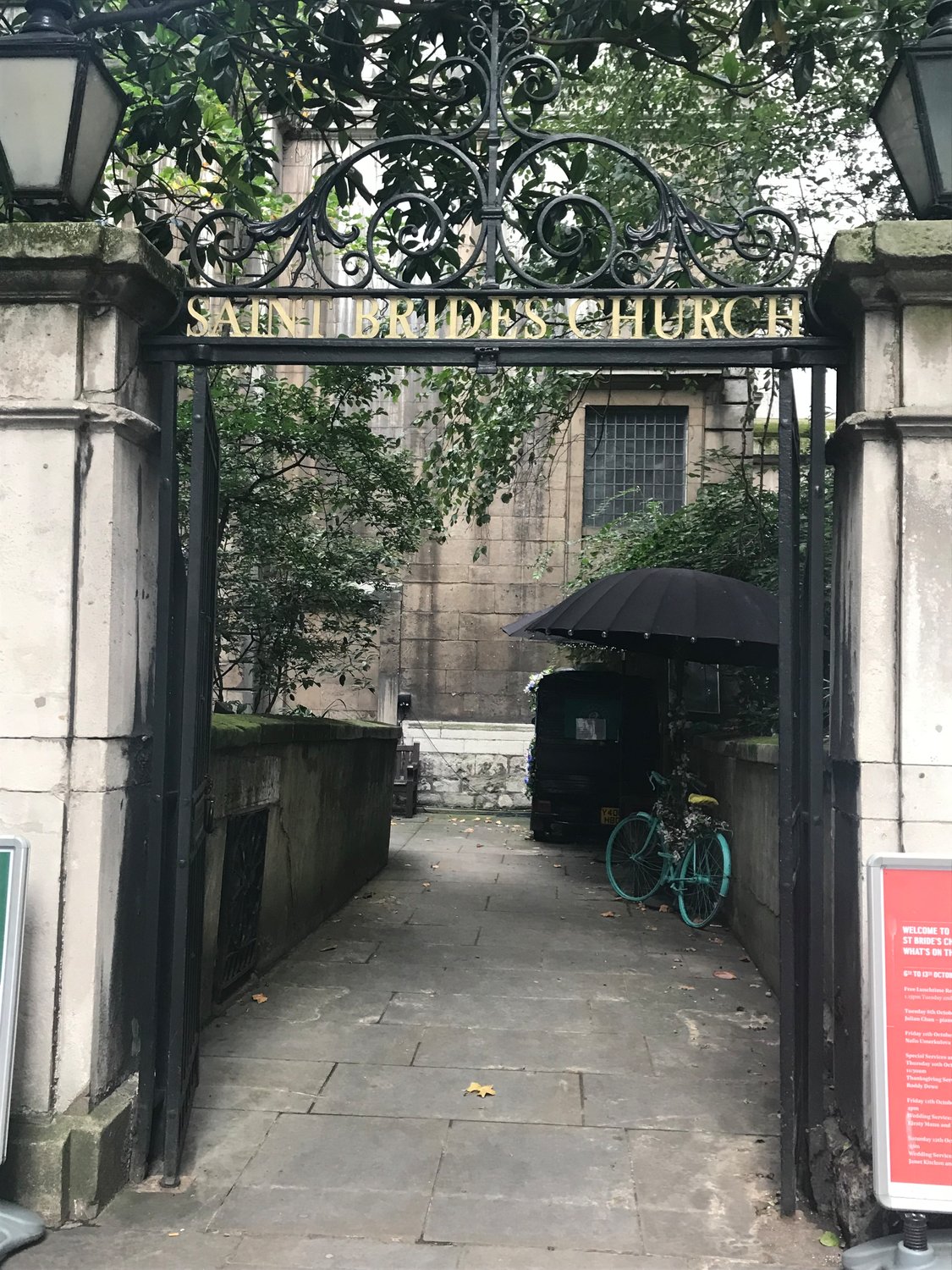 Entrance to St Bride's off of Fleet Street. (Photo/Charles Jones) 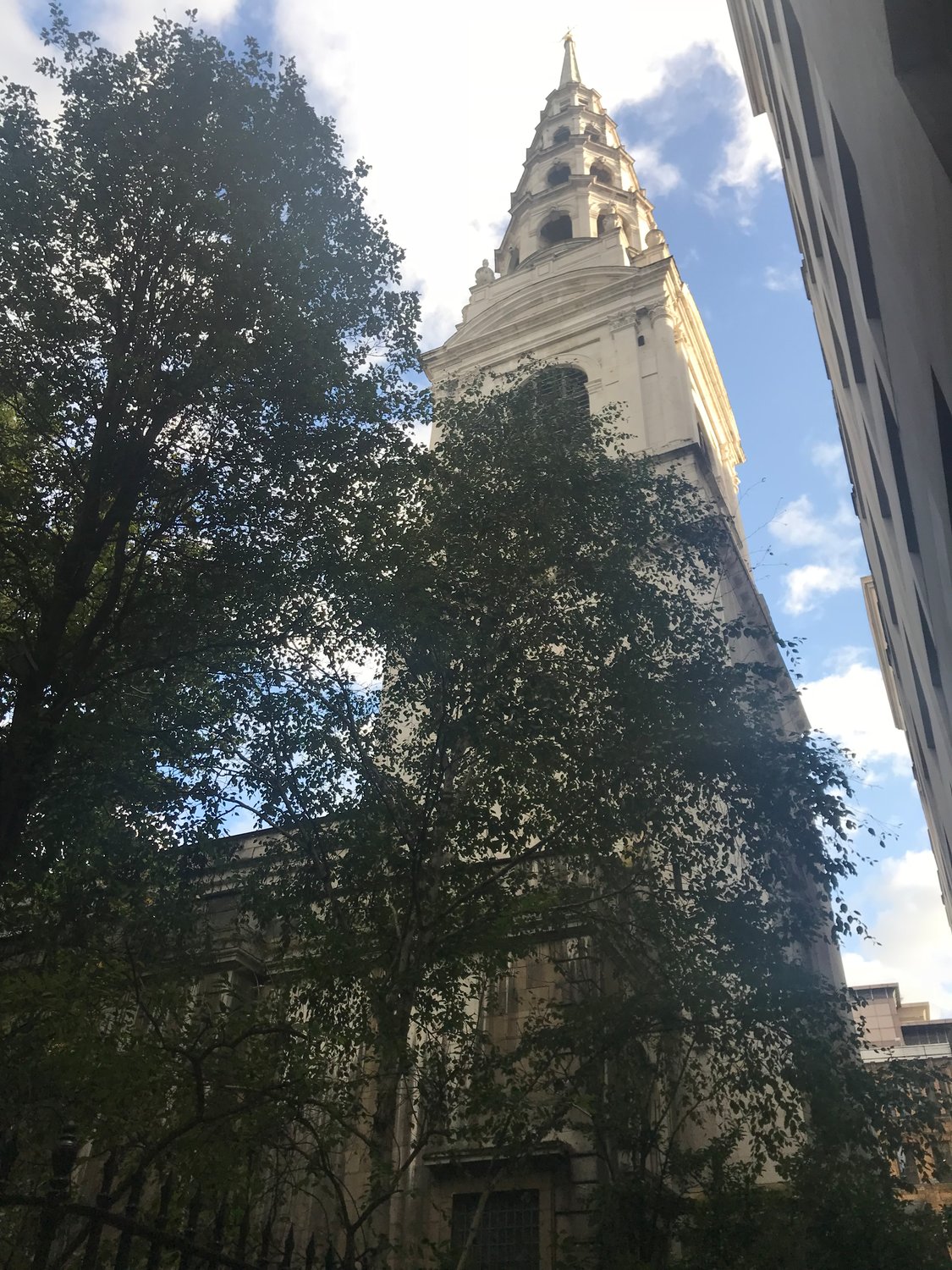 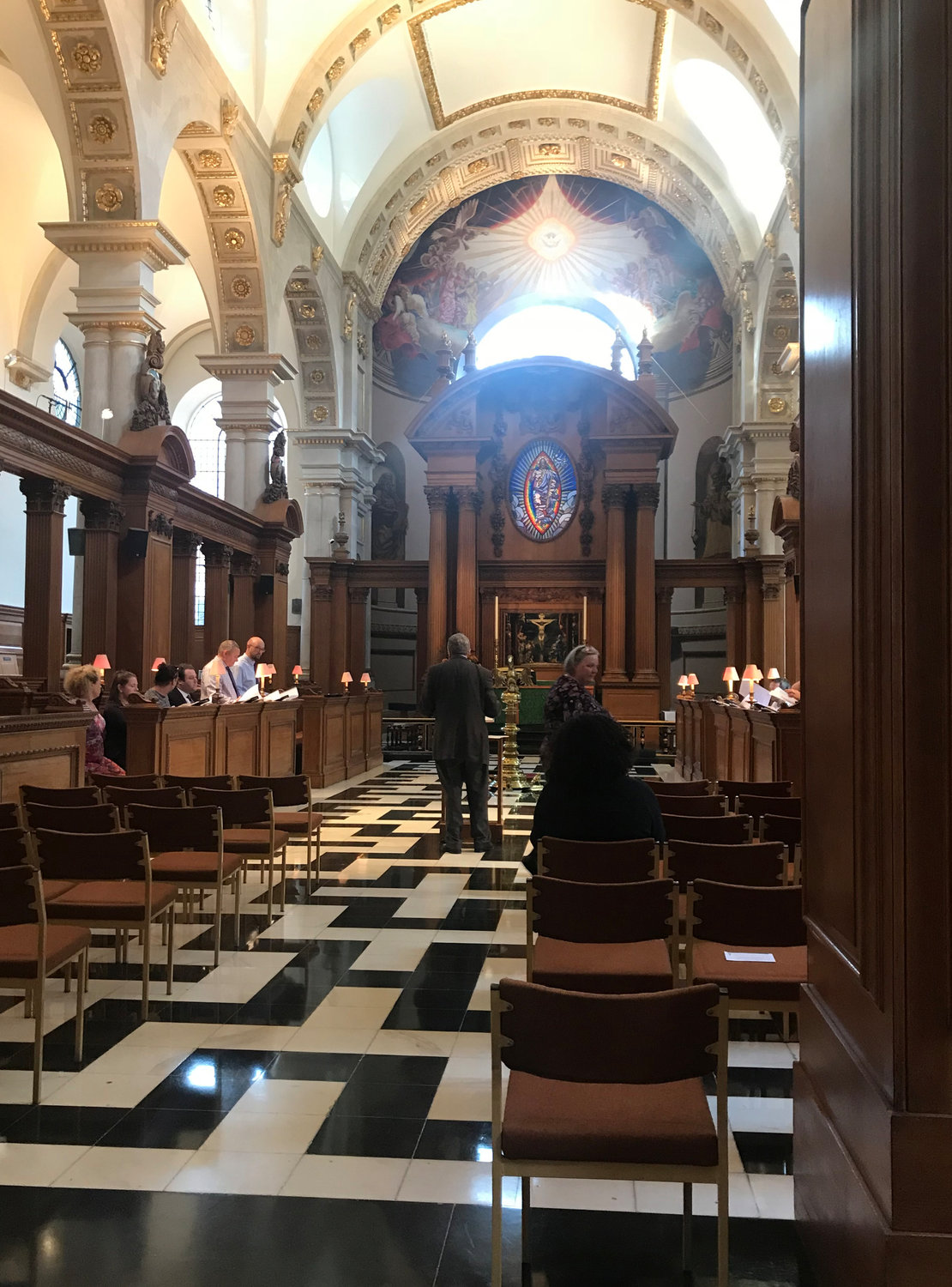 Interior of sanctuary at St. Bride's as the choir prepares to practice. (Photo/Charles Jones) 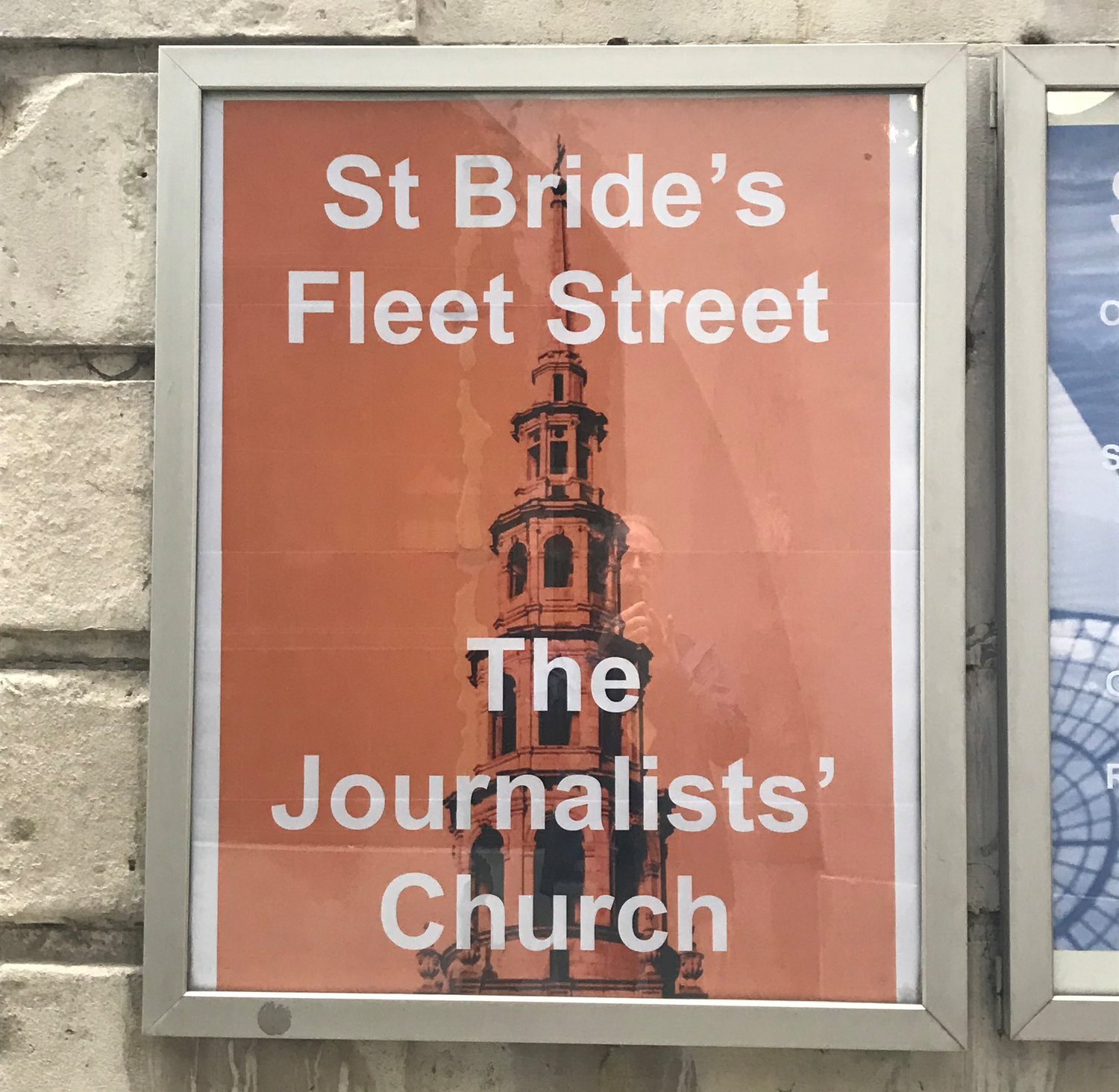 When the centuries-old church was written off by the Diocese of London, God provided a miracle from unlikely places. Once again proving God, and God alone, has the final word in the affairs of mankind and His church.

It was a beautiful bright Sunday afternoon in London in the fall of 2019, a few months before the pandemic shuttered the cities of the world. The morning was spent attending church, the London museum, and several other points of historical interest in the area around St. Paul’s Cathedral. Realizing there was extra time before meeting up with my traveling companion, another history nerd, later in the day, I decided to walk the mile and a half down Fleet and Strand Streets to Trafalgar Square.

Many of the old churches were open along the way with guides available to answer questions and ensure artifacts did not walk out the door. I had already been to five churches by the time I spied a tall spire just off Fleet Street. I turned down a narrow lane and discovered St Bride’s Church. The towering steeple stacked like layers of a wedding cake, it’s also known as “The Journalists’ Church.”

Walking across the small courtyard before entering the beautiful building I noticed musicians gathering for choir practice and other visitors milling about. Inside, the marble floor was polished and well-appointed woodwork adorned the spacious interior of the building. After wandering around for a few minutes, as the musicians began to practice in the sanctuary, I asked the docent standing in the foyer, “So what’s your story?”

It seems a church had been on that location since the 6th century based on archeological research from the foundations and remains in the crypt below. He continued by explaining the current building was designed by the famous architect Christopher Wren, who had designed the nearby Saint Paul’s Cathedral. Many notable buildings had been designed by Wren following the Great London fire of 1666. The fire destroyed large portions of the old city including the previous sanctuary on the location.

He further explained that because this section of London was located between the Cathedral and the Houses of Parliament it became the early center of the city’s printing industry. Most early printing was for either the church or government. In the ensuing centuries, Fleet Street became the home to London’s newspapers.

During World War II, in December 1940 the sanctuary, along with much of London, was damaged or destroyed by German fire-bombing during an air campaign called, “The Blitz.” Following the war, repairing the burned-out sanctuary seemed beyond reach of the parish. The congregation had been reduced in numbers, some by death because of the war and others relocated as business and industry replaced the old neighborhoods. St Bride’s was not the only parish church facing the same dilemma across the city. Money was scarce and it would be up to the local parish to pay for restoration.

The Anglican Diocese of London did not want to shut the doors outright because there was a small but faithful remnant, but felt it would be impossible for the small congregation to raise the money for restoration. So, the decision was made to let the church die a slow death. The next question was, who could the Diocese appoint as the rector of a dying church?

They did not have to look far to find an answer. A promising young clergyman had been appointed to the nearby Cathedral staff a number of years before. Unfortunately, the docent continued, he had developed a serious drinking problem. I responded, “Don’t journalists have a reputation as heavy drinkers?”

Yes, he quickly replied, the Diocese was looking for a place where they could place the alcoholic clergyman so he wouldn’t damage a healthy congregation. It seemed like a good fit, a struggling, dying parish led by a washed-up alcoholic minister.

Soon the new rector was frequenting the bars of Fleet Street. Rubbing elbows with the heavy-drinking journalists, many who had experienced the horrors of war, and now wanted to know his story? Over time, as his relationships with the journalists grew, the journalists decided to help the fund-raising campaign to restore the burned-out sanctuary. Seventeen years after the destructive fire, the meticulously restored sanctuary was rededicated in 1957. In one corner of the sanctuary stands a memorial to journalists who have been killed in the line of duty.

Today, there are lessons for struggling churches and ministries in the history of St Bride’s. When it seemed as though the old church was dead. When the spiritual leaders of London made the decision to let the church “die a slow death.” When it was understood that only a miracle, which seemed unlikely, could keep the doors open.

God provided a miracle from unlikely places. A washed-up clergyman of whom nothing was expected, except to lead a doomed congregation to its death. A cadre of calloused heavy drinking journalists who discovered a good cause around which they could rally. A bewildered congregation who knew they would have to depend upon God to provide for their needs.

Many pastors today are facing personal crises and doubts in an age of declining churches. It’s a good time to remember that if God can work through an alcoholic rector, a stuttering Moses, a reluctant Jonah, a too-old Zechariah, a three-times-denying Peter, a timid Timothy, and a blood-on-his-hands Saul of Tarsus, then He can work through you!

Like the journalists, there is a cadre of often overlooked, neglected, calloused people who are living and working in the very shadows of our steeples. They are looking for a message of hope, a purpose, something good to get behind. It is these people, lest we forget, who need Jesus.

Many churches today may feel like they are struggling in the aftermath of a firebombing. Culture, pandemic and other forces, some from within and some from without, are rocking the foundation of local churches and the church at large. Some congregations have already disbanded, and others are facing the possibility of closing their doors. It is in a moment like this that the church should remember the words of Jesus, “Upon this rock I will build my church, and the gates of hell shall not prevail against it.”

It is a reminder to bewildered churches that it is God who provides the resources, even if from unlikely places. It is God in whom the church must place its faith, hope, trust and strength. The resounding message of Jesus, which should echo from the pulpits, halls and belfries of the church today is “the gates of hell shall not prevail.” It is God alone, who has the final word in the matters of mankind and His church.