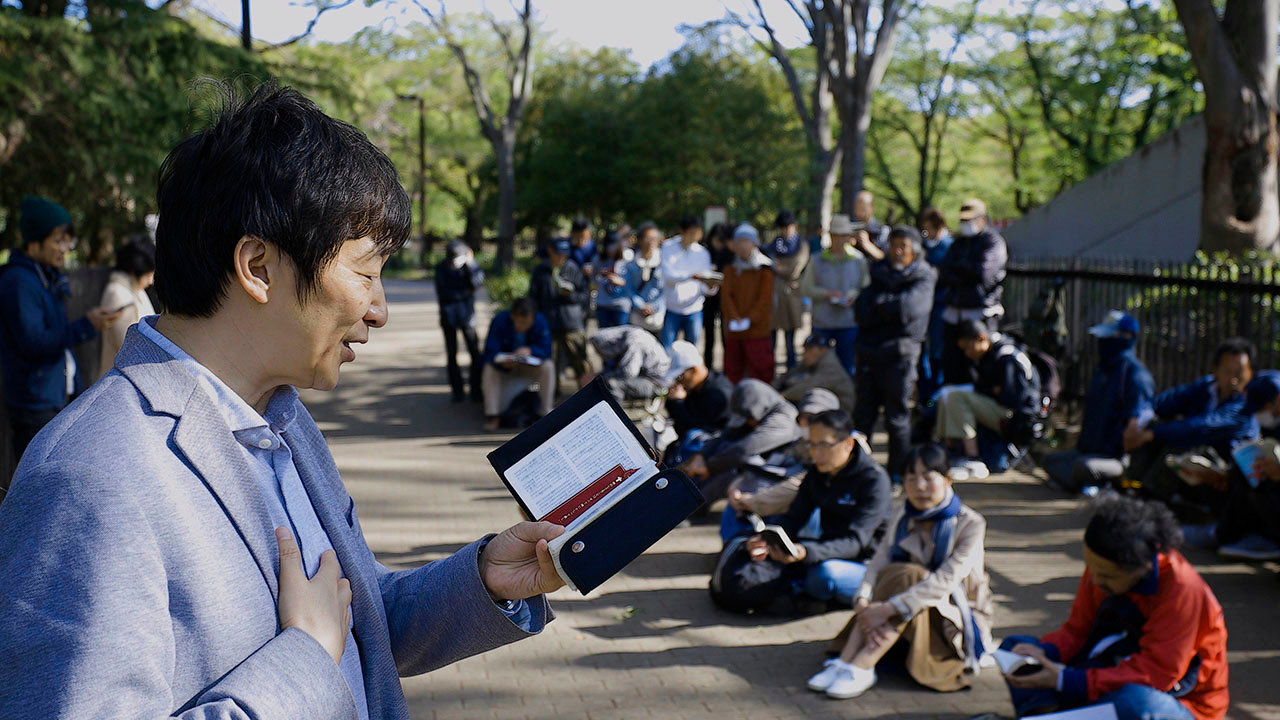 A Japanese pastor preaches to homeless men and women in Yoyogi Park in Tokyo. Every week, between 80 and 100 homeless people show up for sidewalk chapel in the park to eat a free meal and hear the Gospel. IMB
Posted Friday, June 4, 2021 9:51 am
Roger Alford

Georgia Baptists are able to help get the gospel to the nations through the greatest evangelistic initiative of the modern church age. It's called the Cooperative Program.

The rapid fire of a machine gun broke the silence, and a vibrant Christian, bleeding from multiple wounds, took his last breath. Islamic militants, angry that the gospel had taken hold in their village, had gone on a deadly shooting rampage to try to stamp it out.

That’s not a scene from a movie. That’s a true story shared the other day by the Southern Baptist Convention’s International Mission Board about a man who came to know Christ in an Islamic country and who couldn’t help but share what he had experienced with others, even though doing so was inherently dangerous.

That man’s life – and ultimately his death – declared to everyone who knew him that nothing is more important than sharing the gospel, than telling the world about Jesus.

We’re able to do that through what’s been called the greatest evangelistic initiative of the modern church age – the Cooperative Program.

On my own, I don’t have the financial means to fully support even a single missionary. And I certainly would not be personally able to go into countries around the world and present the gospel in a language people there would understand. But by joining with other Southern Baptists in Georgia and across the U.S., I can be a part of a network that supports more than 3,600 International Mission Board missionaries in countries around the world. And you can, too.

It works like this: I, along with nearly 1.4 million other Georgia Baptists, contribute financially to my local church. My church, just like every other participating Southern Baptist church, sends a portion of what they receive to the Georgia Baptist Mission Board, which in turn distributes that money with one singular, overarching goal: to make sure people hear about Jesus here in Georgia, across the nation and around the world.

I am thrilled when I hear about the hundreds of children and teens who give their hearts to Christ at our Georgia Baptist summer camps, because I, as a participant in the Cooperative Program, am helping to purchase the Bible study materials, to keep the grass mowed, to ensure the kids have plenty of food to eat while they’re there, to make sure the buildings and bunks are well kept, to ensure the utilities are paid and the electricity is on, to do all the many things that are necessary so that the kids can have a great time and learn about Jesus.

Most importantly, how many people will be in Heaven as a direct result of the Cooperative Program?

God only knows the exact answer to all those questions, but this we know, the impact is enormous. By working together, Southern Baptists are seeing hundreds of thousands of people reached with the gospel every year.

Over the past year alone, Southern Baptist missionaries, along with their partners on the ground, led 144,322 people to Jesus. And they were able to do so because Southern Baptists provided the financial support to keep them on the field.

Southern Baptists around the world grieve for the dear brother who was shot to death because he enthusiastically told others about Jesus. We also rejoice in knowing he heard those wonderful words: “Well done good and faithful servant.”

That’s because he had heard the gospel directly from the lips of an IMB missionary who was able to be in his village and speak his language because of the Cooperative Program. That’s because eternity-minded Southern Baptists had created a means to get missionaries to the uttermost parts of the earth. So, you see, when folks say the Cooperative Program is the greatest evangelistic initiative of the modern church age, those aren’t just words.

How misguided for those Islamic militants to think they could stamp out Christianity by shooting a dear Christian brother. What they did was create a martyr who has inspired millions of Southern Baptists to redouble their efforts to get the gospel to the nations, and we’ll do that through the Cooperative Program, which truly is the greatest evangelistic initiative of the modern church age.
___
The International Mission Board did not share the name of the Christian who was martyred or even the name of the country where he lived for fear that doing so may negatively impact continuing efforts to share the gospel with his neighbors and fellow countrymen.