Court considers whether US can seize a Russian yacht in Fiji 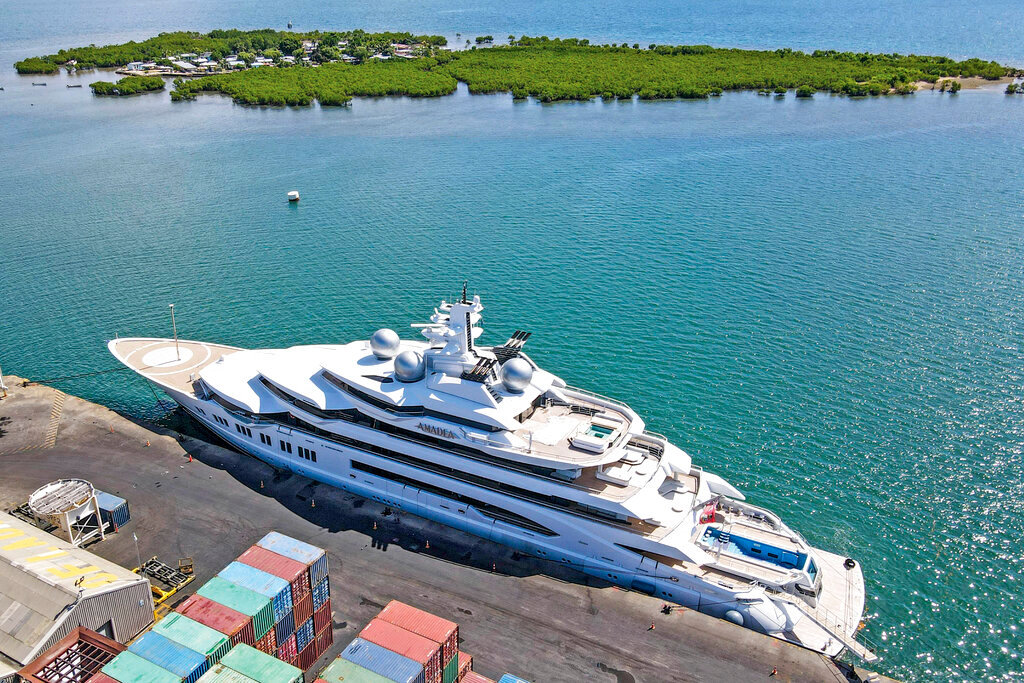 The superyacht Amadea is docked at the Queens Wharf in Lautoka, Fiji, on April 15 2022. (Leon Lord/Fiji Sun via AP, File) 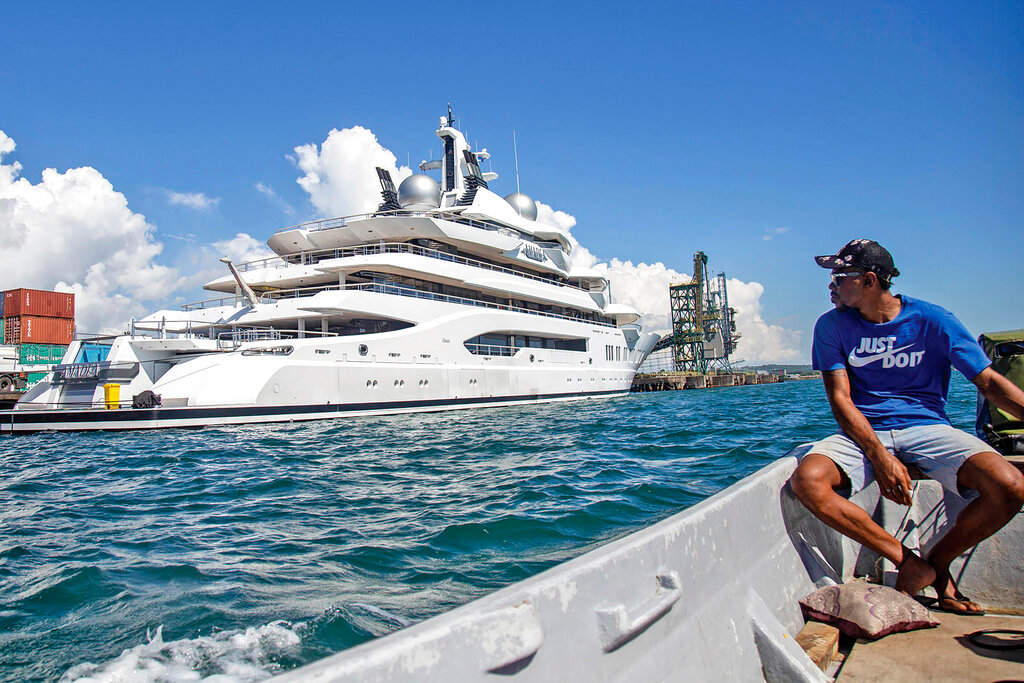 Boat captain Emosi Dawai looks at the superyacht Amadea where it is docked at the Queens Wharf in Lautoka, Fiji, on April 13, 2022. (Leon Lord/Fiji Sun via AP, File)
Previous Next
Posted Thursday, May 19, 2022 10:23 am
By NICK PERRY, Associated Press

“They want to take 20 crew and sail east!” the ship's captain wrote in a frantic May 5 WhatsApp message to lawyer Feizal Haniff, who represents the company that legally owns the superyacht.

“When?” Haniff wrote back, court documents obtained by The Associated Press show. “Please hold. Please hold. Can you hold. I need a judge. I am dialing everyone.”

The case highlights the thorny legal ground the U.S. is finding itself on as it tries to seize assets of Russian oligarchs around the world. Those intentions are welcomed by many governments and citizens who oppose the war in Ukraine, but some actions are raising questions about how far U.S. jurisdiction extends.

In Fiji, the agents boarded the vessel after an initial legal victory in which a lower Fijian court granted the registration of a U.S. seizure warrant.

In Washington, the Justice Department rushed out a media release. “$300 Million Yacht of Sanctioned Russian Oligarch Suleiman Kerimov Seized by Fiji at Request of United States,” it read.

But Haniff argued the U.S. had jumped the gun. Whatever evidence or suspicions the FBI had about the ship, Haniff argued, they didn’t have the right to take control of it, much less sail it away.

That's because prior to the agents boarding the ship, Haniff had already filed two legal appeals, arguing that the real owner was a different wealthy Russian — a man who didn’t face sanctions — and that the U.S. had no jurisdiction under Fiji's mutual assistance laws to seize the vessel, at least until a court sorted out who really owned the Amadea.

Fiji’s Court of Appeal decided to take up the case, and heard arguments Wednesday. The Amadea is now back under the watchful eye of the Fijian police.

The FBI had linked the Amadea to the Kerimov family through their alleged use of code names while aboard and the purchase of items like a pizza oven and a spa bed. The ship became a target of Task Force KleptoCapture, launched in March to seize Russian oligarchs' assets to pressure Russia to end the war.

Court documents say the Amadea switched off its transponder soon after Russia invaded Ukraine and sailed from the Caribbean through the Panama Canal to Mexico, arriving with over $100,000 in cash. It then sailed thousands of miles across the Pacific Ocean to Fiji.

The Justice Department said it didn't believe paperwork showing the Amadea was next headed to the Philippines, arguing it was really destined for Vladivostok or elsewhere in Russia.

The department said it found a text message on a crew member's phone: “We're not going to Russia” followed by a “shush” emoji.

Court documents show the company Haniff represents, Millemarin Investments, is the legal owner of the Cayman Islands-flagged superyacht and that Millemarin is owned by Eduard Khudainatov, a former chairman and chief executive of Rosneft, the state-controlled Russian oil and gas company. Khudainatov, who doesn't face sanctions, filed an affidavit to say he owns the Amadea.

When the U.S. agents boarded the ship, Haniff worried he might never get to a chance to argue his case in court because the Amadea would have sailed away to the U.S. — maybe to American Samoa, Hawaii, even to San Francisco.

He prepared a fiery draft appeal accusing U.S authorities of running roughshod over Fiji's sovereignty after encountering a lower court judge who was “star struck" by the American warrant. He said they'd tried to bribe the yacht's young crew members to sail it to the U.S., and had threatened to cancel the crew's U.S. visas.

“The conduct of the U.S authorities in Fiji relating to the Amadea has been appalling,” he wrote in a draft which he never filed because the appeals court took up the case.

A Justice Department official, who was not authorized to discuss the matter by name and spoke to the AP on condition of anonymity, said the U.S. agents who boarded the ship did so under a valid warrant, and were accompanied by Fijian authorities throughout.

There were “further proceedings following the initial approval of the warrant,” the official acknowledged, adding the U.S. had acted properly under both U.S. and Fijian law.

The official said other claims like bribery were categorically false.

“We are seeking to contract with various service providers for the transport of the ship,” the official said. “The characterization of those contract negotiations as anything other than just that is baseless.”

In court documents, the FBI claims Kerimov, an economist and former Russian politician, is the real owner of the Amadea, which is 106 meters (348 feet) long and features a live lobster tank, a hand-painted piano, a swimming pool and and a large helipad.

Kerimov made a fortune investing in Russian gold producer Polyus, with Forbes magazine putting his net worth at $15.6 billion.

The U.S. first sanctioned him in 2018 after he'd been detained in France and accused of money laundering there, sometimes arriving with suitcases stuffed with 20 million euros.

The U.S. acknowledges that paperwork appears to show Khudainatov is the owner but say he's also the paper owner of a second and even larger superyacht, the Scheherazade, which has been linked to Russian President Vladimir Putin. The U.S. question whether Khudainatov could really afford two superyachts worth a total of more than $1 billion.

The U.S. claims it was Kerimov who secretly bought the Amadea last year through shell companies. The FBI said a search warrant in Fiji turned up messages on the ship's computers that point to Kerimov. Emails showed that Kerimov's children were aboard the ship this year and that the crew used code names — G0 for Kerimov, G1 for his wife, G2 for his daughter and so on.

The Kerimov family's ownership was evident from changes they made to the superyacht, like adding more electric sockets in its bathrooms, and their involvement in approving the new pizza oven and spa bed, the FBI said. Crew members discuss a possible “upcoming G0 guest trip” noting he wants the quickest jet skis available — so they'll need to buy new jet skis.

In his appeal, Haniff argues the U.S. case is based on hearsay and rumors spread by unnamed crew members, and there's no evidence that Khudainatov couldn't afford an investment in two superyachts.

The FBI's evidence only shows Kerimov's family may have been guests on the boat, he said.

“This is thin stuff,” Haniff wrote in his appeal. “The super-rich are a tribe who live different lives from the rest of us: they are given privileges and luxuries in goods and services which are far removed from ordinary experience. This says nothing suggestive of ownership.”

Within a week or two, the appeals court is expected to decide what happens next to the Amadea.