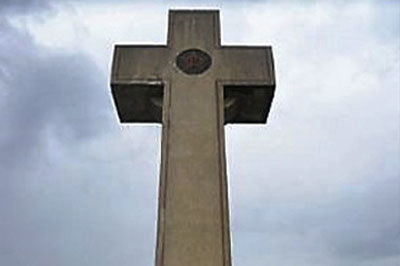 WASHINGTON (BP) — The U.S. Supreme Court gave hope Feb. 27 to at least some defenders of a 40-foot cross on public land that it might not only protect the memorial but clarify its doctrine on government establishment of religion.

The justices heard oral arguments in the appeal of a Fourth Circuit Court of Appeals decision that a Latin cross in memory of World War I soldiers promotes Christianity, thus violating the Establishment Clause of the First Amendment under a nearly 50-year-old test. The American Humanist Association (AHA) challenged the constitutionality of the Bladensburg, Maryland cross, which was completed in 1925 to memorialize 49 soldiers from Prince George's County, Maryland.

The case of a Maryland cross placed to honor those who served in World War I could be vital in how courts view the establishment clause. BP/Special

It is the latest in a long line of cases in which the high court has sought to interpret a much-debated clause that says, "Congress shall make no law respecting an establishment of religion." The cases have included such considerations as Ten Commandments displays on public property, school prayers and government prayers.

Members of the Supreme Court acknowledged in the Feb. 27 arguments they have not followed their own 1971 test in recent decades while appeals courts have often continued to apply it. While a majority of the justices appeared likely to support the memorial in this case, some also proposed it was time to move on to another test to provide guidance for lower courts.

Southern Baptist religious freedom leader Russell Moore told Baptist Press the justices "should see through this attempt to amend the Establishment Clause to mean what Madison did not write."

"A judiciary that finds an illusory pathway in the Constitution to establish a secularized state hostile to faith is dangerous," said Moore, president of the Ethics & Religious Liberty Commission (ERLC), in written comments. "As we submitted in our brief to the court, maintaining a nearly century-old memorial is hardly an official declaration in law for Christianity."

Other proponents of the constitutionality of the Bladensburg cross predicted the high court will provide a way forward on Establishment Clause cases.

"One thing that was probably the most clear of the day is how confused and troubled the law is right now, and that the justices are all aware of that, and that they're ready to do something about that," said Kelly Shackelford, president and chief counsel of First Liberty Institute, in an interview with BP outside the court building. "They obviously were going back and forth with how to do that, but I think it's clear they know something needs to be done and the law needs to be clarified.

"That gives us a lot of hope," Shackelford said, "because No. 1, if we clear things up, we can stop a lot of these attacks upon veterans memorials and religious symbols across the country."

Mathew Staver, founder of Liberty Counsel, told reporters outside the court after the arguments he thinks the justices demonstrated "enough concern to jettison an unworkable test and create an entirely new test, so there's clarity as to whether words like 'In God We Trust,' nativity scenes on public property, crosses or memorials are constitutional or whether they violate the Establishment Clause."

In its 1971 Lemon v. Kurtzman opinion, the Supreme Court articulated a three-prong test for determining whether a law violates the Establishment Clause. The Lemon test, as it became known, says a law must have a secular purpose, not primarily promote or restrict religion and "not foster an excessive entanglement with religion."

Since then, justices have offered a variety of tests. In a 2013 decision regarding legislative prayers, the court suggested Establishment Clause challenges must be viewed by reference to historical practices and understandings.

During the Feb. 27 oral arguments, the high court's newest associate justices – Neil Gorsuch and Brett Kavanaugh – questioned Monica Miller, lawyer for the AHA, about the validity of the Lemon test.

"Is it time for this court to thank Lemon for its services and send it on its way?" Gorsuch asked.

"No, your honor, I do not think so," Miller responded.

Kavanaugh asked her if Lemon is still useful "when we haven't used it in the most important cases that are on point here" during the last 40 years. "And to Justice Gorsuch's point, the lower courts need some clarity," Kavanaugh said.

Miller told the justices finding a better test is difficult, "and I think that's why the court hasn't come up with [a] singular test, because the cases are complex. That's the Establishment Clause."

Each case about a cross "is evaluated with its specific facts," Miller said. "And I know that is not the best answer you want to hear, but the reality is no one has come up with a better test than Lemon."

Role of the cross in historical displays

Michael Carvin – who argued on behalf of the American Legion, a veterans organization that appealed the Fourth Circuit's ruling to the Supreme Court – told reporters afterward he thought "there was almost uniform consensus on the court on all sides that the current state of affairs can't remain the way it is."

During oral arguments, Associate Justice Elena Kagan, a member of the high court's liberal bloc, seemed especially sympathetic to the argument that the Bladensburg cross demonstrates the "history that this is how soldiers were memorialized in World War I" in America and Europe.

Carvin argued the justices should adopt a coercion test like one proposed in their 2013 decision on legislative prayers.

Though the Bladensburg cross "should be upheld under any sensible Establishment Clause analysis, we submit the court should analyze it under the coercion test, which prohibits tangible interference with religious liberty, as well as proselytizing," Carvin told the court.

Jeffrey Wall, acting solicitor general for the United States, acknowledged in response to Kagan the cross is "the pre-eminent symbol of Christianity."

"The question is whether it's also taken on a secular meaning, because to say the cross has only that religious meaning I think would condemn every cross" in the public arena, Wall said.

Neal Katyal – arguing for the Maryland-National Capital Park and Planning Commission – disagreed with seeking to change the test now.

"The easiest way to resolve this case … is to say, in the wake of World War I, crosses like this one have an independent secular meaning," Katyal told the justices.

The park commission owns the Bladensburg cross, which is located with monuments to veterans of other wars in Veterans Memorial Park.

Miller told the court that those arguing for protection of the cross are "telling Jews, telling Muslims, telling humanists that the cross honors them, when they emphatically say it does not."

Shackelford, whose organization is representing the American Legion in the case, told BP the answer "is going back to the Constitution itself and what the founders were intending by the Establishment Clause, which was not sort of a religious cleansing of our landscape of any sort of religious monuments or memorials."

The founders "didn't want the government coercing anyone with regard to their religion," Shackelford said. "They wanted people to be free in exercising their faith, and that should be the guiding principle."

"We don't need the government to promote our faith," said Hollman, whose organization filed a friend-of-the-court brief with other religious organizations in support of the AHA.

The ERLC's friend-of-the-court brief with several other religious organizations said a government action almost always "does not violate the Establishment Clause unless history confirms that the founding generation understood that action as an establishment of religion outright or as a legal attribute of a religious establishment."

The Supreme Court is expected to issue a ruling before its term closes in late June or early July.

Tom Strode is the Washington bureau chief for Baptist Press.