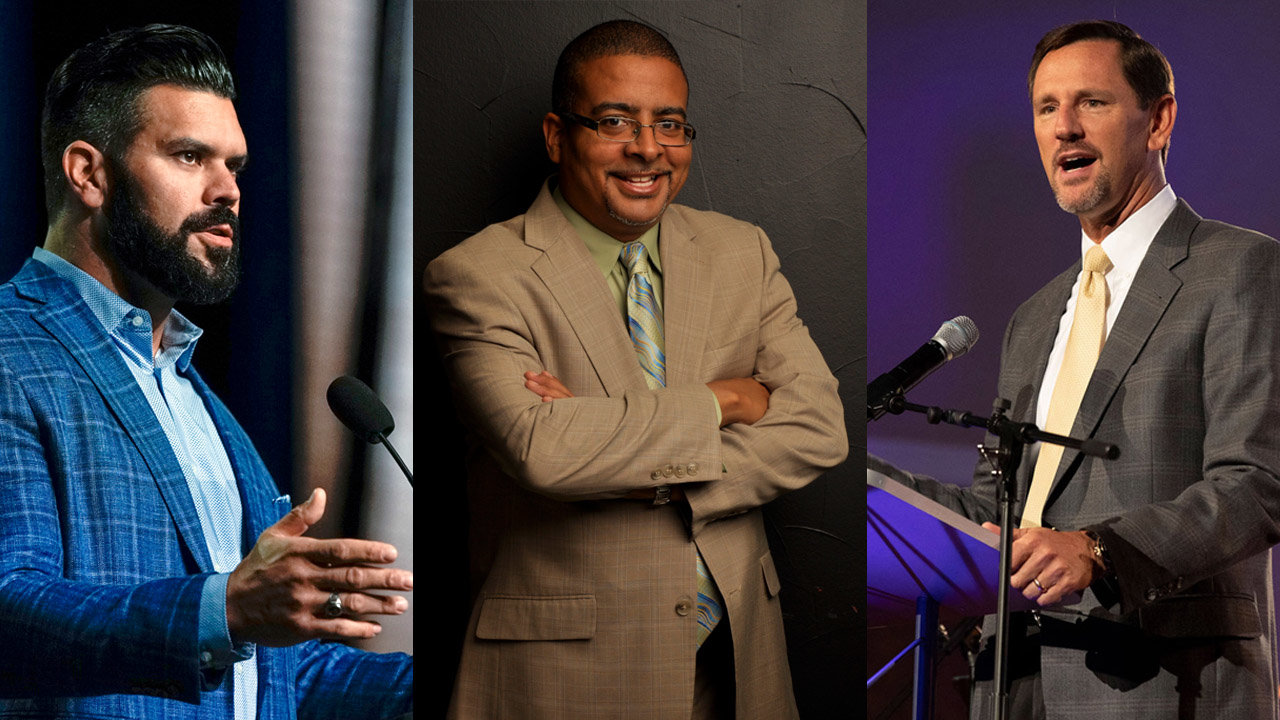 Left to right, Robby Gallaty, Tyrone Barnette, and Paul Chitwood are the three keynote speakers for the Spark Conference, which will be available online Aug. 28.

DULUTH — Today, Georgia Baptist Mission Board leaders confirmed that Tyrone Barnette, pastor of Peace Baptist Church in Decatur, will be the third keynote speaker for the upcoming Spark Conference.

Barnette joins International Mission Board President Paul Chitwood and Robby Gallaty, senior pastor of Long Hollow Baptist Church in Hendersonville, Tenn., as part of the annual church leadership training event. Known previously as Go Georgia, Spark will be held entirely online this year with various breakout sessions and keynote addresses becoming available Aug. 28. Groups or individuals who register prior to that date at TheSparkConference.com will have free access to those resources from Aug. 29-Sept. 22.

Called into the ministry in 1985, Barnette and 14 others founded Peace Baptist on Feb. 7, 1993 in his home. Since then the church has grown to more than 3,000 members with an average of 1,200 in Sunday attendance. Barnette has preached around the world, including Brazil and parts of Africa, where he helped build five churches and witnessed more than a thousand people receive Christ.

Chitwood was elected IMB president in 2018, having previously served as executive director of the Kentucky Baptist Convention since 2011. Prior to that he was pastor of several churches of varying size for 18 years. Gallaty has served at Long Hollow since October 2015. His testimony has led him to the platform of “making disciples who make disciples” through resources at Replicate Ministries.

“Pastor Tyrone Barnette is one of the most genuine and effective leaders in our state,” said Scott Sullivan, director of Spark and Georgia Baptist lead strategist in Discipleship on the Church Strengthening Team. “His ability to connect with an audience and communicate biblical truth is next level! Every pastor in the nation needs to hear how he grew a church of 14 meeting in his home to over 3,000 with a worldwide Gospel impact.”

Barnette’s address will be titled: “Making disciples where you are with what you have.” He, Chitwood, and Gallaty will also be taking part in live Q&A sessions Aug. 28. More details will be forthcoming.