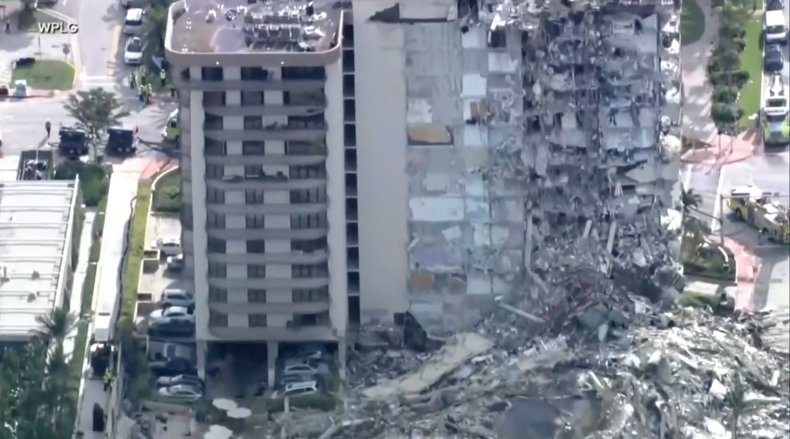 SURFSIDE, Fla. (BP) — A day after the 12-story Champlain Towers South Condo collapsed on itself, Pines Baptist Church Pastor Luis Acosta was as close to the smoldering rubble as authorities allowed.

Acosta said while at the site Friday (June 25), he sensed on the faces of the victims’ family members gathered nearby “desperation, the need for hope, the need to hear their loved ones are safe,” he told Baptist Press today (June 28). “I’ve been reading into their looks they’re probably wanting any word. It’s a search and rescue now, but sooner than later it’s going to be a recovery.

“Barring a miracle where the floors just fell in such a way that it created a vault where people can hold on until they’re rescued, barring that kind of a miracle … I am expecting the death toll to begin to rise.”

The tower in the small community just north of Miami Beach partially collapsed in the early hours Thursday (June 24).

Acosta led a small group of Florida Baptist Convention (FBC) Disaster Relief personnel to the site to help determine the best response. They’ve issued a call for 50 chaplains and the dispatch of a combination laundry-shower unit. Ten residents are confirmed dead and about 150 remain missing, the Associated Press reported today.

FBC Disaster Relief Director David Coggins was conducting regional DR training at Acosta’s church in Pembroke Pines when the tragedy occurred just 20 miles away. Three chaplains had already deployed to the collapse site today and at least three others were on their way, Coggins said.

“We’ve extended a call out to about 50 (chaplains), and we’re just waiting to see how they respond. That call didn’t go out until late Friday night,” Coggins told Baptist Press. “It will mainly be a ministry of presence. We’re going to station them with the laundry unit as well, and just have them to be there and connect with family members. are sending family members to certain hotels to gather information, and so we’re just going to have our chaplains walk through those places.”

Coggins spoke with victim advocates, emergency response leaders and others in determining ways to help.

“Our main objective is to provide comfort and support. We want the people, the families especially, to know that they’re cared for,” Coggins said. “We want to provide scriptural support for them when they get news about their loved ones, when that comes. And also if we have opportunities, we want to be able to support the search and rescue, and the first responders.”

Southern Baptist DR volunteers and personnel are not certified to conduct search and rescue at the site where five days later, firefighters, sniffer dogs and search experts continued to painstakingly dig for survivors and human remains.

“Miami-Dade has one of the premier search-and-rescue units in the country, literally in the world,” Coggins said. “But we want our presence there so that we can provide support.

“We’re also asking our chaplains to try to connect with the local Jewish community, because it’s a strong Jewish community,” he said. “The rabbis there have been holding some prayer gatherings. So we’re just going to ask our chaplains to connect with them and just show support for them, show solidarity with them and offer assistance … without intruding into their process.”

No Southern Baptist congregations are located in Surfside, according to the Annual Church Profile. Acosta has offered to help the FBC response efforts and hopes churches can work together in the region to help those impacted by the tragedy.

“We’re pretty far from the place, not so much in distance but just density. We’re an hour away,” he said. “Hopefully a month from now we can still do some ministry and provide the hope of the Gospel. And as we meet physical needs, share Christ. That’s our hope.”