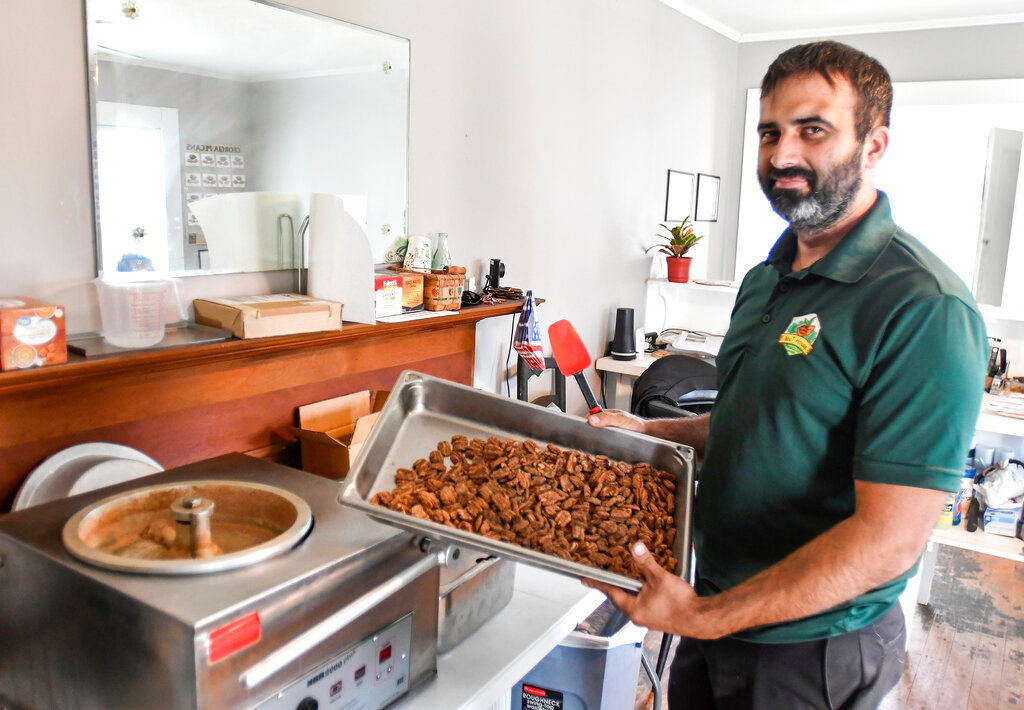 BYRON, Ga. (AP) — When Tim Williams purchased his home in Kewanee Farms in Byron in the late summer of 2020, starting a pecan processing facility and opening a storefront wasn’t something he’d ever imagined doing.

“I didn’t know anything about pecans before I came to Georgia,” Williams said.

The Iraq combat disabled veteran decided to move from the Midwest to Middle Georgia to live near his mom after retiring from the U.S. Air Force. He served from 2008 to 2020.

His property, which he described as a small farm, was filled with pecan trees — 86 in all.

So, Williams decided to buy a pecan sheller with plans of selling his pecans. Then he bought some more used equipment.

About that time, Sasnett Fruit & Nuts was closing its doors, and Williams bought some of their equipment, too, as well as some of their storefront furniture.

On Oct. 15, Williams, 32, opened a storefront in a converted old home and the Nut House Pecan Company was born.

The name seemed fitting to Williams, who’s selling nuts out of an old house.

When walking into the small storefront, customers may smell a fresh batch of his praline pecans, a mixture of cinnamon and sugar, roasting on site.

For those who still like to crack pecans themselves, he sells the nuts in their shells as well.

Williams also sells walnuts and almonds that he buys wholesale.

His processing facility remains at his Kewanee Farms property for now.

Williams said he plans to eventually tear down the Main Street building, construct a new storefront and move the processing facility onto the same property.

That could happen within the next two to three years, depending on the success of Williams’ pecan crop, he said.

Also in his storefront, Williams showcases some of his work from his woodworking and cabinetry business, T.W. Solutions.

Also, this year’s crop production is down significantly due to an intermittently cold spring. The projected Georgia crop is now 60 million pounds at best and could come in even lower to below 50 million pounds for the first time in 15 years, according to Lenny Wells, a professor of horticulture and extension horticulture specialist for pecans at the University of Georgia.

But Williams remains undaunted, leaning into the advice of those experienced in the pecan business like Rick Sasnett, who managed his family’s pecan shelling business that started as a fruit stand.

“This business has a lot of ups and downs,” Williams said. “Hopefully, we’ll have another boom crop next year.”

Besides, Williams said he has his Air Force retirement and pension.

“I don’t do this for the money,” he said. “It’s something to keep me engaged … and to provide a service to the community.”

Williams plans to donate a portion of his profits to JAVELAN, a program in Omaha, Nebraska, that provides funding for service dogs for military veterans and retired first responders. JAVELAN trained Williams’ service dog, Peter.

Williams also plans to give part of the profits to the Byron-based Star Bright Animal Rescue. He adopted Peter from the nonprofit animal rescue group.