Southern Baptist Disaster Relief response is ongoing to historical flooding in two states, with Georgia Baptists’ continual work in one while waiting to be dispatched to the other.

“We have feeders and project coordinators hosting teams of volunteers for the purpose of rebuild after last year’s flooding [in South Carolina],” said Stuart Lang, Georgia Baptist Mission Board Disaster Response state missionary. “We are partnering with the SC Baptist State Convention to provide this support.”

Although Disaster Relief training was required for early responders in the South Carolina cleanup, that is no longer the case as efforts are now in a rebuilding phase. Georgia Baptists have been involved for nearly nine months since catastrophic flooding hit their neighbors to the east last October. At this point the rebuild effort has been underway for a few months, with a group of students from Mercer University beginning that process in March during spring break.

The construction effort for South Carolina has been extended through September for groups willing to help. Teams of no more than 25 will be placed at local churches with meals provided by Georgia Baptist Disaster Relief Feeding units. Members of different churches or an association can band together for one group. More information can be found here, including cost and materials needed. 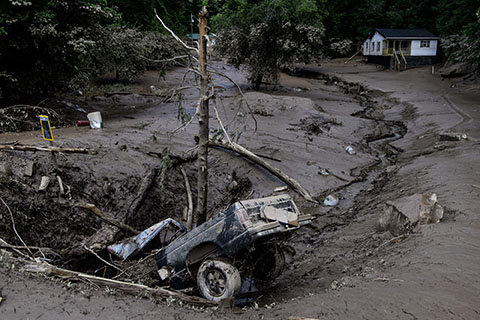 Debris and mud are strewn around Clendenin, WV, after flood waters from the massive storm that hit the area on June 23 receded. The flooding killed at least 24 people across the state. Southern Baptist Disaster Relief leaders and volunteers are already mobilized in response to aid survivors. Photo by Sam Owens, courtesy Charleston Gazette-Mail

“Weeks are open for teams beginning July 25,” said Patty Ficarra, Georgia Baptist Mission Board state missionary support in Community Missions and Disaster Response. She added that the supply list could change week-to-week, and before going teams would be advised to contact the project coordinator. Ficarra can be contacted at (770) 936-5254 or pficarra@gabaptist.org.

Lang added the West Virginia flooding is being monitored closely by Disaster Relief there with floodwaters still receding and local groups and neighboring states already responding. Right now for states further out like Georgia it’s a wait-and-see situation to better gauge logistics.

“We’re waiting for a little more assessment to come in and the response from neighboring states, which will help us better in our planning and steps of action,” he said. “We should know by the middle of next week if we’ll be sending credentialed Disaster Relief volunteers.”