Georgia SBDR volunteer Fort Oglesby, of First Hartwell, hauls debris to the street from a flood damaged home in Longs, SC. He worked with 6 others to help homeowner Ray Childers, 71, who has lived in his home for 20 years in the Aberdeen Golf Community. Childers’ wife is in a nursing home and he is staying with his daughter. Almost all of the homes in the community and took on several feet of water. LAURA SIKES/NAMB
Posted Friday, August 9, 2019 10:59 am
Scott Barkley

HINESVILLE — Georgia Baptist Disaster Relief Director Stuart Lang took special note of the news that this could be a particularly active hurricane season.

Lang is a big fan of preparation. At the Disaster Relief training he leads tomorrow at First Baptist Hinesville, most of the registration paperwork for attendees will have been completed before they walk through the door. That includes MinistrySafe training administered online. Once they check in, the vetting process will finish through a personal interview. Lang will begin his presentation at 9 a.m. He expects everything to be wrapped up by one that afternoon.

The event is designed as an introduction to Disaster Relief as well as recertification for longtime volunteers. At the end of the day, participants will be credentialed for cleanup and recovery, childcare, and feeding teams.

"There's not a lot we can do with hurricanes until after they make landfall and clear," he said. "But before then we start thinking ahead and preparing our response. We look at the size and severity of the storm and begin talking with ministry coordinators. That way, we're ready to go when the time comes."

The training at First Hinesville will happen two days after the National Oceanic and Atmospheric Administration's (NOAA) warning that this could be an above-average season for hurricanes. The news comes as Georgians continue to recover from the effects of Hurricane Michael last year. Agriculture losses alone mounted to $3 billion, according to state assessments.

“El Nino typically suppresses Atlantic hurricane activity but now that it’s gone, we could see a busier season ahead,” he pointed out. “This evolution, combined with the more conducive conditions associated with the ongoing high-activity era for Atlantic hurricanes that began in 1995, increases the likelihood of above-normal activity this year.” 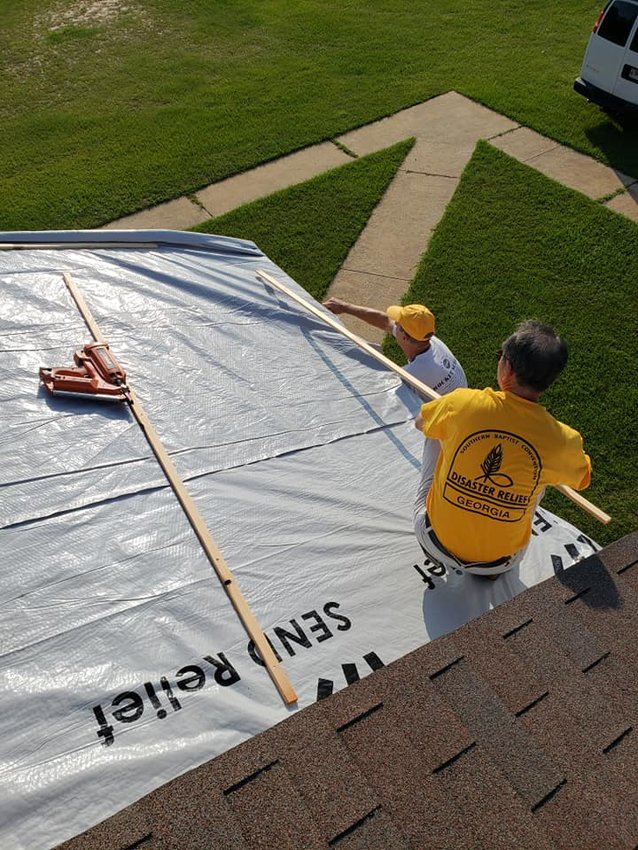 "It presented us with the opportunity to intentionally request uncredentialed, affiliated teams," Lang said. "Church teams and groups from Baptist associations that weren't Disaster Relief-trained jumped in. It went so well that I've already committed to associational missions strategists that when we find ourselves in a similar situation, we'll repeat that plan."

That said, it's impossible to overstate the importance of planning and training beforehand. Lang said the 75 signed up for the Hinesville training will be joined by the expected walk-ins. Other training sessions will take place Sept. 14 at Grace Baptist Church in LaGrange, Sept. 27 at Dunwoody Baptist Church, and Sept. 28 at First Baptist Church in Covington.

Mistakes from the well-meaning

When it does come to response, Lang warns about those who are well-meaning but may inadvertently hinder the recovery process.

"In any large disaster, don't collect unsolicited items. A lot of times they get thrown away if you take a collection to the area and don't have anyone ready to receive it.

"After Hurricane Katrina, tons of food, diapers, and clothes were thrown into landfills for this reason. It led to havoc within the infrastructure. It was well-meaning, but not wise."

In those cases, he urged sending gift cards or cash for leaders on the ground to use more efficiently to meet the obvious, pressing needs.

"We can take those and put them in the hands of pastors or associational leaders to hand out. If I see a specific need, I'll help Georgia Baptists get those resources together – as we did with Buckets of Care – and handle the transportation of them myself."