Robert Goff of Trenton Baptist First Church in Dade County unzips his sleeping bag to bed down for the night at the shelter at Savannah Baptist Association. JOE WESTBURY/Index

SAVANNAH — It only takes one disaster to change your life. 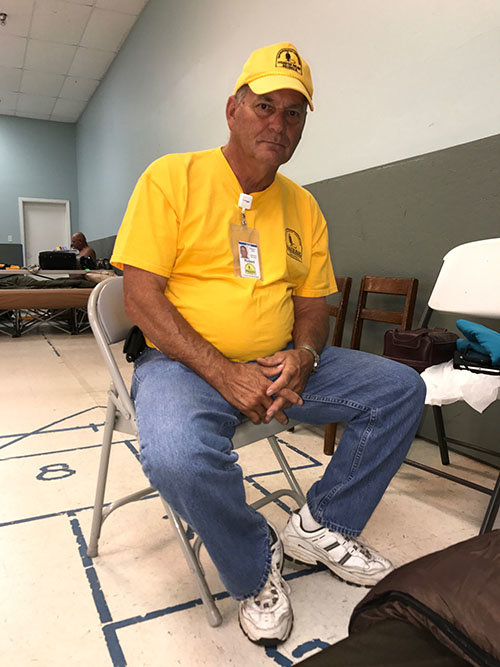 And for Robert Goff, it was a tornado that struck in the early morning of April 27, 2011 and tore North Georgia from its foundations. Nearly 350 were dead in seven states; 15 were in Georgia.

Ringgold was hardest hit but Trenton, in Dade County, was close behind.

“My house in Trenton sat in the middle of destruction like you have never seen,” he said on Sunday night as he unpacked his sleeping bag at the Savannah Baptist Center. “My house was the only one left standing on my street; the tornado destroyed the homes of seven of my immediate neighbors but did not touch mine, with the exception of pulling down all but one of my large trees.”

Goff told his story late Sunday night after a day of cutting limbs from homes in Coastal Georgia following the destruction of Hurricane Matthew. Savannah Baptist Association opened the doors of its Baptist Center, suspending its homeless ministry to feed and house more than 100 volunteers from three states.

As he talked, Goff struggled with a stubborn zipper on a sleeping bag he was placing on a cot he had recently purchased. Before the night was over he and a few dozen other men would be sleeping side by side in the large room, trying to catch a few hours of sleep before heading out again early in the morning. 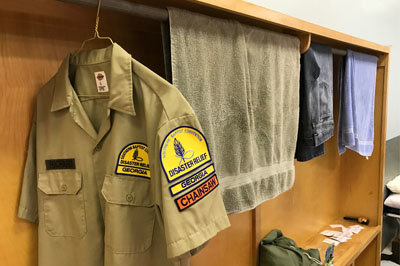 A Georgia chain saw member's shirt hangs in a makeshift closet at the Savannah Baptist Center. The Center has been pressed into service as a sleeping area and cafeteria for more than a hundred disaster relief volunteers. JOE WESTBURY/Index

He tells how the storm spared his church – Trenton First Baptist – but lifted the congregation’s van and dropped it across the street in the parking lot of a funeral home. Tornadoes do strange things like that.

“It was a sad time, let me tell you, something you never get over. Before you go through something like that you see it on television and say, ‘Boy, that’s horrible.’ But when you go through it yourself, its far more than horrible. It’s too much for words.

'You cry with your friends'

“You cry with your friends and don’t know where to start.”

But Goff knew exactly where to start when the Georgia Baptists came to town with their bright yellow disaster relief shirts and chainsaws in tow.

“Those teams rolled in and began cutting down trees, pulling large limbs from roofs and driveways. They cleared roadways and driveways and helped us get out from the debris.

“It was unreal … both the storm’s destruction and the team’s response. They pulled out their chain saws and made short work of the twisted limbs and trunks scattered here and there,” he explained. 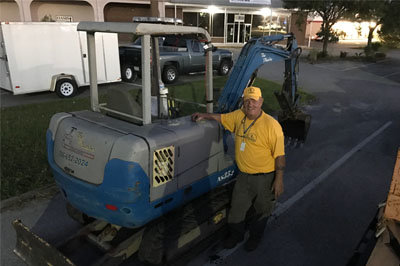 Gary Verhulst stands with a track hoe after arriving back at the Savannah Baptist Center late Sunday night. Like Goff, he had just ended a long day helping victims of Hurricane Matthew put their lives back together. Verhulst, a member of Grove Level Baptist Church in Maysville, believes the ministry is one of Georgia Baptists' strongest examples of living out the Gospel. He served twice in the Gulf Coast after Hurricane Katrina and in Haiti, the Kentucky ice storm, and recent flooding in Louisiana and South Carolina. JOE WESTBURY/Index

That’s when Goff told his wife that if he ever had the opportunity he wanted to get involved with a group like that. That was five years ago and he enrolled in the very next training session to become a certified disaster relief volunteer.

For 30 years, Goff – now retired –  says he was “Santa Claus in a brown suit” as he delivered packages for UPS. Now he is a Santa Claus of sorts as he helps bring peace of mind to families whose lives have been torn apart by disaster.

The disaster relief motto is ‘Serving Christ in Crisis,” and that is why Goff became involved. It’s the perfect way to live out the Gospel.

“We’re just helping people who don’t know where to turn,” he says.

“Other than preaching the Gospel, this is the best thing that our denomination does,” he says. “It makes me proud to be a Georgia Baptist.”