Iglesia Bautista Adhoreb in San Cristobal would be grateful for construction help from Georgia Baptists for the second floor of their church. DAVID CHANCEY/Special
Posted Friday, September 28, 2018 12:48 am
Joe Westbury

Iglesia Bautista Adhoreb in San Cristobal would be grateful for construction help from Georgia Baptists for the second floor of their church. DAVID CHANCEY/Special

FAYETTEVILLE — David Chancey enjoys making the members of McDonough Road Baptist Church uncomfortable. When it comes to missions experiences, that is.

For the better part of his nearly two decades at the church he has encouraged youths and adults alike to get out of their comfort zone and participate on a mission trip. The church has been involved both domestically and internationally and he feels it develops an individual spiritually anytime they place themselves in a situation they do not control.

Then he heard that the Georgia Baptist Mission Board might be exploring a connection with the Dominican Republic and thought he would give State Missionary Frank Nuckolls a call. The conversation between the Board and the Caribbean nation was in very early stages and Chancey wanted to know more. 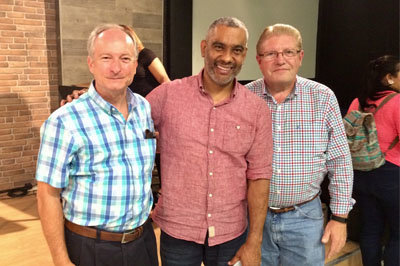 Before long he and Nuckolls were strolling the streets of Santo Domingo and visiting with pastors, learning of the physical and spiritual needs. One area of concern that repeatedly surfaced is the void left behind when, in 2015, the International Mission Board redeployed its personnel to other fields.

“The pastors all reflected on how they had come to rely on the training and staff development provided by the missionaries,” he observed.

“Brother Sanchez freely admitted that the biggest concern is the pastors. There is a tremendous need to train church leadership and strengthen the churches with a vision to reach their communities,” he explained.

And that is the consensus of Nuckolls’ and Chancey’s joint trip to the island nation.

During the three-day August trip the two men met with nine pastors representing seven churches ranging from Santo Domingo – a major port as well as the capital and largest city – down to two smaller cities as far as 90 minutes into the countryside.

“From our limited time we did not see any of the hurricane damage that resulted from Irma hitting the island, which the Dominican Republic shares with Haiti. We know the devastation was very hard in Haiti and that many Baptists have ministered there this year but that was not our experience,” Chancey.

“From our limited time the DR, as many refer to it, was like most any tropical island in the Caribbean. Most of the churches in the Convention are small; I believe there are a couple that may have 1,000 members but the state convention president’s church had about 300 the day we visited and when I spoke. That included a special service where all Sunday School classes attended.” 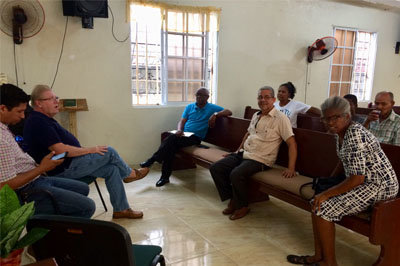 Frank Nuckolls, in black shirt on the left, explains how the connection would work and how Georgia Baptists could possibly help them with construction projects ... such as finishing out the second floor just above their heads. See above photo. DAVID CHANCEY/Special

Chancey would like to ask Georgia Baptist churches who are currently involved in ministry in the Dominican Republic to contact Frank Nuckolls at fnuckolls@gabaptist.net to share their experience. A database would be a valuable resource as the connection moves forward.

In addition, Nuckolls has compiled the first draft of a list of needs that Georgia Baptists could easily meet through short-term volunteers or mission trips.

He also believes the DR would be a great mission experience for those at McDonough Road or other churches.

“We try to have an Acts 1:8 focus and take at least one international mission trip a year to complement our domestic outreach. I have noticed that anytime someone steps out of their comfort zone they experience a spiritual growth spurt; they find themselves depending on the Lord in a way unlike they have ever experienced back home.

His message to those contemplating such an adventure: “If you want to jump start your spiritual life, take an international mission trip, especially when you do not speak the local language. You will never return the same again.”