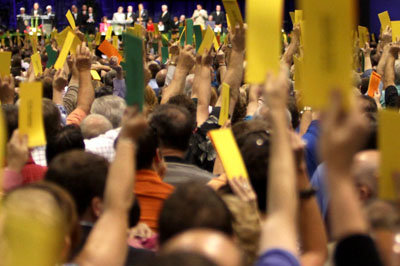 NEW ORLEANS (BP) — In September 1986, my life was changed forever when I was elected as pastor of a dying Southern Baptist mission called Franklin Avenue Baptist Church.

I grew up in the National Baptist denomination. I was the middle of five kids raised by a single mom who required everyone in her house to attend church on Sunday mornings.

At the age of 21, I was radically saved while lying in Charity Hospital in New Orleans not knowing if I was going to live the next 24 hours because of a serious head wound. A deacon of the church I grew up in put his finger inches from my face and said without apology, "Boy, obedience is better than sacrifice. If you were obedient to your mom, you would not be sacrificing your life here in this hospital!"

That night I asked Jesus Christ to come into my life and woke up the next morning with a commitment to live the rest of my life as a born-again Christian.

After getting out of the hospital, I started a street ministry in the neighborhood I grew up in because I wanted everyone to know about this Jesus who turned my life around. While preaching one Sunday at a National Baptist church, someone mentioned to me that Franklin Avenue was looking for a pastor and asked if I would be interested. I said, "Franklin Avenue is a white church, blacks do not go there!" That's when I was told about the transitioning neighborhood and how Franklin Avenue was now an African American congregation. Well, I submitted my resume, and as the saying goes, the rest is history.

After meeting with the pulpit committee several times, I was then scheduled to teach a church-wide Sunday School and preach for the 11 a.m. worship service. After the service, there was about a 90-minute Q&A time with 35 to 40 members. Later that evening, I got a call from the pulpit committee chair to inform me that I had been elected as the mission's pastor.

After hanging up the phone, I was both excited and scared because I had never led a church before.

Upon becoming the pastor, I was committed to ask for help in all areas I thought could assist us as a church and me as a pastor. And that's when I was first introduced to the many benefits of the Southern Baptist Convention. I met on a biweekly basis with leaders from our local association and then was introduced to professors, staff and facilities at New Orleans Baptist Theological Seminary. Our association trained our Sunday School teachers and ministry leaders while our seminary provided the space we needed for outreach events. Because of our growth, within three years we were able to become an autonomous church.

While brainstorming with our church leaders, one of our older members asked a question I did not expect. The question was: Since we are now an autonomous church, why don't we get out of the Southern Baptist Convention?

I was floored by the question and asked, "Why?" I was once again floored when I was told about the history of the Southern Baptist Convention. I never knew that the convention I was now a part of started as a result of slavery.

After a brief history lesson and intense discussion, I made a statement that I knew came from God. I looked each of those members in their eyes and said, "All of us have a past. All of us have done something in our past that we regret. However, there is nothing we can do about our past, but we can do a whole lot about our future."

With that said, I then stated a number of reasons why I felt it would be in our best interest to not get out of the Southern Baptist Convention:

I then stated, "The SBC is not a perfect convention by any means, but I truly believe that the SBC exists to do the will of God on this earth. So let's stay with this convention and help to carry out the Great Commission and the Great Commandment of our Lord Jesus Christ."

I then asked for a vote and the vote was unanimous to stay in the Southern Baptist Convention. Looking back on that night, without a doubt, deciding not to "ditch our denomination" was one of the best decisions we have ever made as a church.

Fred Luter is pastor of Franklin Avenue Baptist Church in New Orleans and a former president of the Southern Baptist Convention.