Dozens of tornadoes cause widespread damage across South 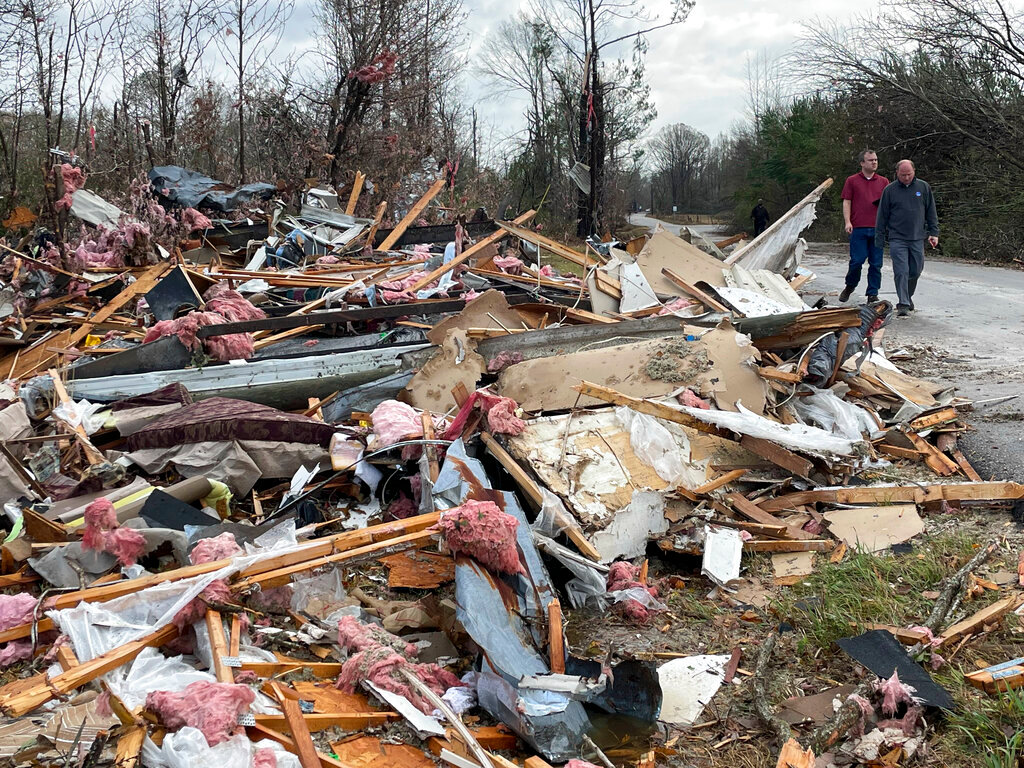 People walk through an area of destoryed structures in Flatwood, Ala. on Wednesday, Nov. 30, 2022. Tornadoes damaged numerous homes, destroyed a fire station, briefly trapped people in a grocery store and ripped the roof off an apartment complex in Mississippi and Alabama. (AP Photo/Butch Dill)
Butch Dill
Posted Wednesday, November 30, 2022 10:49 am
By KIM CHANDLER and JEFF MARTIN, Associated Press

WETUMPKA, Ala. (AP) — Tornadoes damaged numerous homes, destroyed a fire station, briefly trapped people in a grocery store and ripped the roof off an apartment complex in Mississippi and Alabama. Two deaths were reported as the storm front continued to threaten parts of the Deep South on Wednesday.

The National Weather Service had warned that strong twisters capable of carving up communities over long distances were possible as the storm front moved eastward from Texas. They were fueled by record high temperatures ahead of a cold front and threatened a stretch of the United States where more than 25 million people live.

The “threat for supercells capable of all severe hazards continues” near the Gulf Coast in Mississippi, Alabama, Florida and Georgia, forecasters said, after multiple tornado warnings were issued starting Tuesday afternoon and continued through the night.

Two people were killed in the Flatwood community just north of the city of Montgomery. “They were in their home that was struck by a tree due to the tornado,” said Christina Thornton, director of the Montgomery County Emergency Management Agency.

Thornton said others in the area were injured, and search-and-rescue crews were able to check all the houses in the area by Wednesday morning. The sheriff's office said a shelter was being opened at a nearby church for the affected residents.

In the west Alabama town of Eutaw, video from WBMA-TV from showed large sections of the roof missing from an apartment complex, displacing 15 families in the middle of the night.

“We’ve got power lines, trees just all over the road,” Eutaw Police Chief Tommy Johnson told WBRC-TV. “In the morning when we get a little daylight, we’re going to do a door-by-door search to make sure no one is trapped inside or anything like that.”

A suspected tornado damaged numerous homes during the night in Hale County, Alabama, where the emergency director said more than a third of the people live in highly vulnerable mobile homes.

“I have seen some really nice mobile homes tied down, but they just don’t stand a chance against a tornado,” Hale County Emergency Management Director Russell Weeden told WBRC just ahead of the storm.

The weather service confirmed that tornadoes hit the ground in Mississippi. Images of the wreckage in Caledonia showed a grocery store damaged, a fire station shredded and a house toppled, but Lowndes County Emergency Management Agency Director Cindy Lawrence told WTVA-TV that everyone escaped injury.

Hail stones crashed against the windows of City Hall in the small town of Tchula, Mississippi, where sirens blared and the mayor and other residents took cover. “It was hitting against the window, and you could tell that it was nice-sized balls of it,” Mayor Ann Polk said after the storm passed.

High winds downed power lines, and flooding was a hazard as more than 5 inches (13 centimeters) of rain fell within several hours in some places. More than 50,000 customers in Mississippi and Alabama were without electricity Wednesday morning, according to poweroutage.us, which tracks utility outages.

About 100 people hunkered down in a tornado shelter in Starkville, Mississippi, where Craig Ceecee, a meteorologist at Mississippi State University, said he peered out at “incredibly black” skies. Ceecee has assembled a database of Mississippi tornado shelters, and found several towns without any.

“I’ve had to go through events without (shelters), and trust me, they were scary,” Ceecee said.