Editorial: The resolution on the Confederate flag 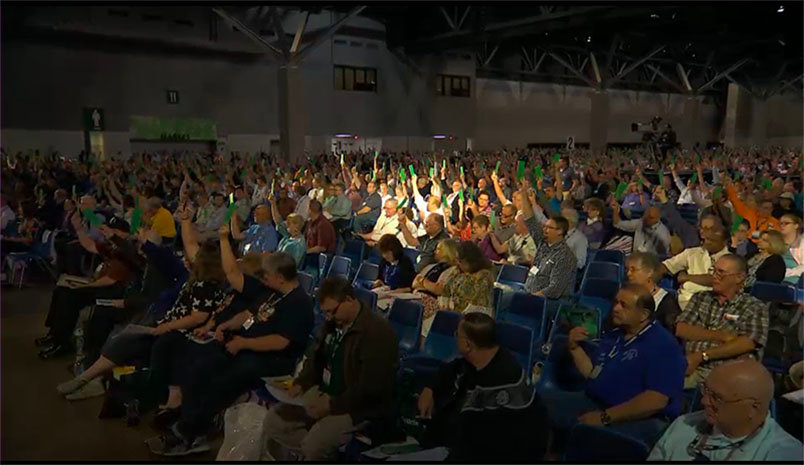 Since returning to Georgia from the Southern Baptist Convention in St. Louis I have heard mixed reviews expressed over a certain resolution adopted by the Convention messengers – a resolution repudiating the display of the Confederate flag.

First of all, I am confident that many of those who display the Confederate battle flag have malice toward no one and are more reconcilers than racists. Perhaps they have grown up with an idle knowledge of the flag’s association with the Confederacy and its armies, but with a reverence for and a strong emotional attachment to the flag simply because of its association with Confederate ancestors.

I also think there is a difference between the facts of history and the “glorifying” of history. Slavery was a dark, dreadful part of our history in this country, and lifting up and waving the Confederate flag as a symbol of the merits of slavery cannot be justified. On the other hand, valuing the flag as a means of memorializing the soldiers who fought and died under it in a context of remembrance is wholly different.

I take no pride in the ill treatment of any minority group and I deeply regret that many of our Baptist forbears in the 1800s insisted that the right to hold slaves was clearly sanctioned by the Holy Scriptures. Furthermore, slavery in and of itself is always wrong and the ill treatment of slaves in the South in the 19th century was inexcusable, but so was the merciless march through Georgia of General William Tecumseh Sherman, whose very name conjures up visions of fire and smoke, destruction and desolation. Many fought for the South in the Civil War, not because of the slavery issue, but simply to protect their homes and families.

For those who get alarmed over resolutions, your angst should be mitigated by the fact that resolutions are not binding upon any church. The Southern Baptist Convention as well as the Georgia Baptist Convention honors the autonomy of each local congregation and will never attempt to exercise authority over any church. Your church may adopt any resolution passed by the messengers of the state or national convention, craft a resolution expressing an opposing view, or simply ignore any adopted resolution.

It is important that we all recognize that the Southern Baptist Convention is becoming more ethnically and racially diverse. That simply means that the makeup of the denomination is becoming more like John’s description of heaven in Revelation 5:9-10, where he writes, “And they sang a new song, saying, You are worthy to take the scroll, and to open the seals: for You were slain, and have redeemed us to God by Your blood out of every tribe, and tongue, and people, and nation; and have made us kings and priest to our God.”

I feel confident that the architect of the resolution on the Confederate flag and the Resolutions Committee presented it to the Convention because they wanted to remove anything that might become a stumbling block to someone coming to faith in Christ.

Russell Moore, president of the SBC Ethics and Religious Liberty Commission, has stated. “The moral enormity of the slavery question is one still viscerally felt today, especially by the descendants of those who were enslaved and persecuted.”

James Merritt, lead pastor of Cross Pointe Church in Duluth, said he offered an amendment to strengthen the resolution because “no one can deny” the Confederate flag is “a stumbling block” for many African Americans to the witness of Southern Baptists.

Merritt continued, “We have a golden opportunity to say to every person of every race, ethnicity, and nationality that Southern Baptists are not a people of any flag. We march under the banner of the cross of Jesus and the grace of God.”

In a conversation with Merritt after the convention had ended he told me that several African Americans, including one tall, large man hugged him and with tears flowing down his face thanked him for helping to make the resolution stronger.