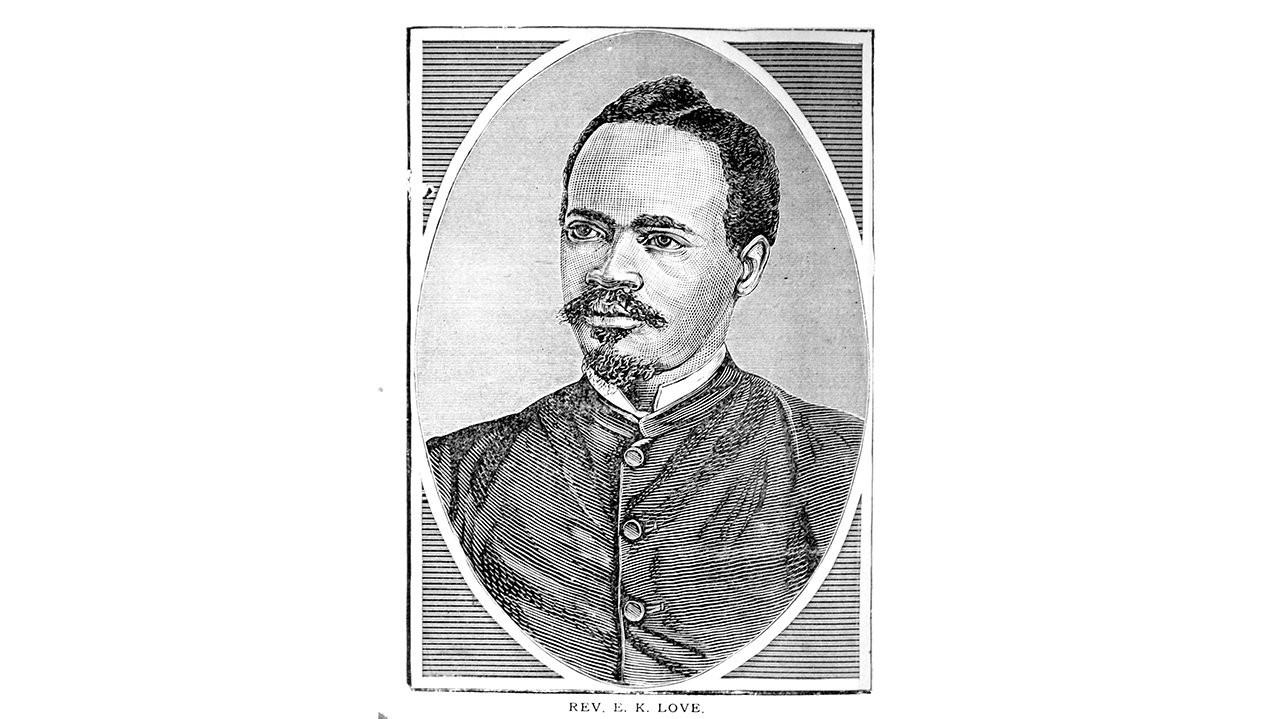 Courage is necessary in everything. Without it not much can be accomplished; with it much that appears impossible may be done. Our lives should not be too dear to us to sacrifice for the cause of Christ.

It was one of the largest funerals Savannah had ever seen. His final earthly journey began at the First African Baptist Church on Franklin Square. Over 5,000 people were in the procession or lining the streets. Both Black and White, stood side by side, shrouded in silence except for the sound of human feet, horseshoes, and wagon wheels on cobble stones. The hearse was pulled by four white horses followed by over 90 carriages and other vehicles. Hundreds of others were literally packed onto 14 street cars a few blocks over, set aside for the occasion.

Rev. Emmanuel King Love was born into the obscurity of slavery in 1850 near Marion, Alabama. When he died fifty years later a southern city stopped to mourn. Who was this former slave that a southern city would mourn his passing? Why should E.K. Love be remembered today? 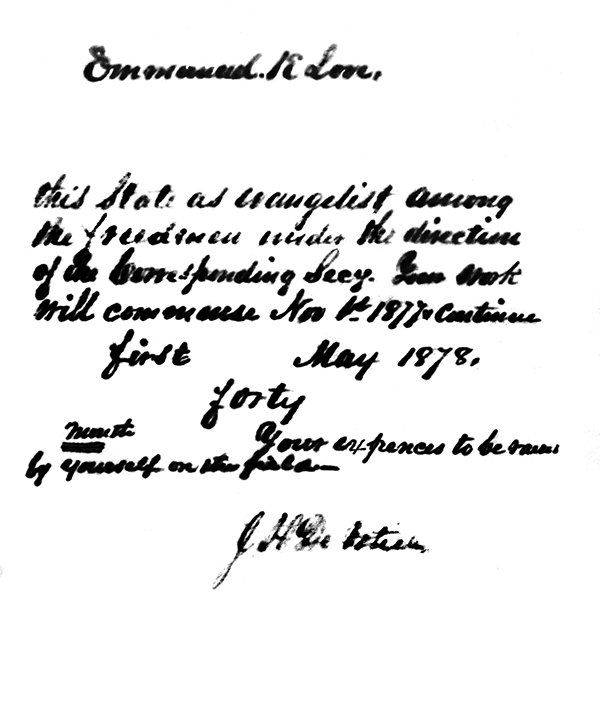 A carbon copy of the Commission issued to E. K. Love when he was appointed a missionary under the Georgia Baptist Mission Board in 1877. (Charles Jones, Samford Special Collections Archives, Birmingham, AL)

E.K. Love was born into to a world on the verge of immense change. There were few expectations for those born into slavery. Life as a slave or a freedman was difficult at best, and it would require courageous leaders to pave the way forward.

Early life – A passion to learn

During his youth, the Love family were members of the Hopewell Baptist Church. His first pastor was Dr. James H. DeVotie, who became his mentor and supervisor when Love was appointed a missionary of the Georgia Baptist Mission Board. Love was baptized at age 18, by former HMB missionary William H. McIntosh, and it was reported he (Love) “tried to preach that same night.”

Love had a passion to learn but his family had little means, financially or legally, to provide an education in the antebellum South. Following emancipation, he studied for six years under Whites who were willing to help him. During this time, he gave up farming and became a “ditcher.” Digging ditches and irrigation canals was hard physical labor but was more profitable than sharecropping. Unfortunately, much of what he earned was loaned to family who were sharecroppers. Most was never repaid, not from lack of want but lack of means.

In 1872 he was surprised when his church, Harmony Baptist Church, informed him that they thought he should obtain more education for ministry. They were unable at the time to provide financial support, but it was an affirmation of their trust and God’s call on his life. It was only a few weeks before the next school session was to begin. His church prayed and God provided. He was able to secure a well-paying job and in only ten days earned the money necessary to begin his education at the Augusta Theological Institute.

Over the next five years Love worked his way through school at times going hungry at other times sleeping in a classroom overnight where there was a fire in a stove to stay warm. He was recognized as a scholar by his peers and the faculty who had Love fill in at times in the lecture hall. He graduated with top honors in 1877.

In May of the same year the Georgia Baptist Convention voted to establish the Georgia Baptist Mission Board. The new board was to coordinate, promote, and provide financial accountability of SBC mission offerings, and enlist and provide supervision for state missionaries. Love was one of two African Americans appointed the first year as state missionaries to work among the freedmen of Georgia. 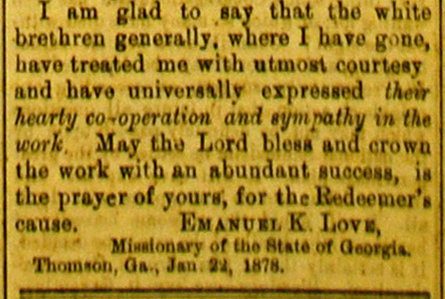 Excerpt from a letter by E.K. Love published in the Christian Index several months after his appointment as a State Missionary. (Charles Jones, Georgia Baptist Archives, Duluth, GA)

As a missionary his work included: evangelism (preaching revivals), Sunday School training and promotion, and Pastors Schools. The latter were two-week training schools for African American church leadership held across the state. The staff was made up of GBMB missionaries and other leadership enlisted from across the state.

After two years he resigned to accept the call of the First African Baptist Church of Thomasville, Georgia. During his two years at Thomasville, he baptized over 450. In 1881 he resigned to begin work as a Sunday School State Missionary with the American Baptist Publication Society of Philadelphia. In 1885 he was called to the First African Baptist Church of Savannah. At age 35 he became the youngest pastor in the history of the 3,000 member church.

In his first 18 months he was able to unite a divided congregation. In his first three years he baptized over 1,200. Love spent 15 years as the beloved and respected pastor of this congregation. Thousands of baptisms took place during his pastorate. At the same time, he continued to rise as a respected leader among the African American community both locally and nationally.

He was a Civil Rights pioneer who dared to challenge the injustices of what were considered the social norms of the day. Before there was a Rosa Parks there was an Emmanuel King Love. He and others had written letters protesting to the Interstate Commerce Commission. There was no provision for guaranteeing if a Black had purchased a first-class train ticket that there would be available seating, even though it was in violation of a federal law. 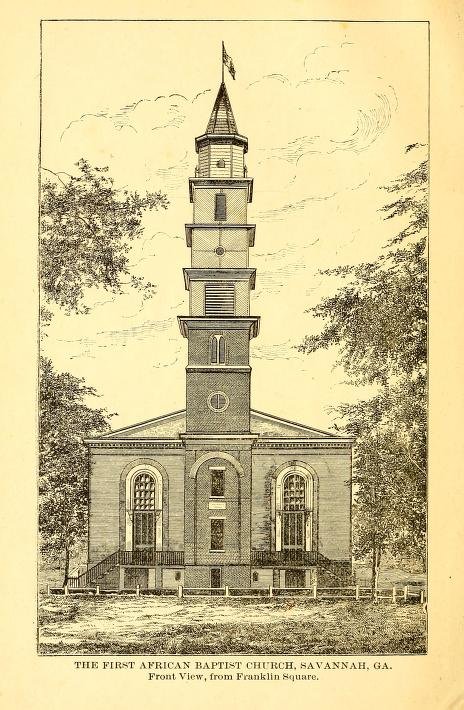 In 1889 a National Baptist Convention was to be held in Indianapolis. One of the railroads agents solicited the business of those who would be traveling from Georgia. When Love inquired, the agent promised that first class accommodations would be provided for those who paid. Normally an extra car would be added to accommodate “separate but equal accommodations.” Many had agreed to meet in Brunswick to begin their journey as a group from Georgia.

When they arrived, there was not an extra car. Love and several other blacks sat in the first-class coach with the Whites. At one of the stops, someone got off the train and telegraphed ahead that Blacks were sitting in the first-class car. A few stops later, a mob of 50 or more boarded the train and proceeded to attack Love and those with him. Eventually the train continued after treatment was provided for those who had been attacked.

The effect was more pronounced in the North than it was in the South. Obviously, it created outrage that even a well-known and respected African American minister was not exempt from this type of treatment, but it would be many years before the laws would be enforced with anything more than lip service. His courageous actions in the face of injustice called attention to problems that needed to be changed and further endeared him to the African American community.

Later that same year he preached a sermon titled, “Lynch Law and Rape” to a packed church of over 1,500. It was noted that the number included about 30 Whites. Following the sermon First African membership voted to adopt the sermon as their stand against the practices. Once again it was a courageous act that undeniably drew the ire of many in the community for an African American man to speak against the practices.

He was a supporter of education to help African Americans “lift up” the race. He helped to establish the Central City Baptist College in Macon. He was a part of a group who called for more African American representation on the board of (now) Morehouse College in Atlanta. It was not a call that was well received by all. It took a courageous voice to speak truth to power. Very often that voice was the voice of E.K. Love.

A legacy of courage and grace

Why should he be remembered?

He was a state missionary, beloved pastor, gifted preacher, evangelist, educator, denominational leader, and editor. He set an example by working across the racial divide to do the work of the Kingdom. He was a Civil Rights pioneer who was willing to put himself in harm’s way for the sake of justice.

A southern city stopped to mourn his death because E.K. Love was recognized, even by those who opposed him, for the courage and grace of God exemplified through his life. As he said in his sermon “Wait on the Lord,” Our lives should not be too dear to us to sacrifice for the cause of Christ. E.K. Love had the courage to do it.