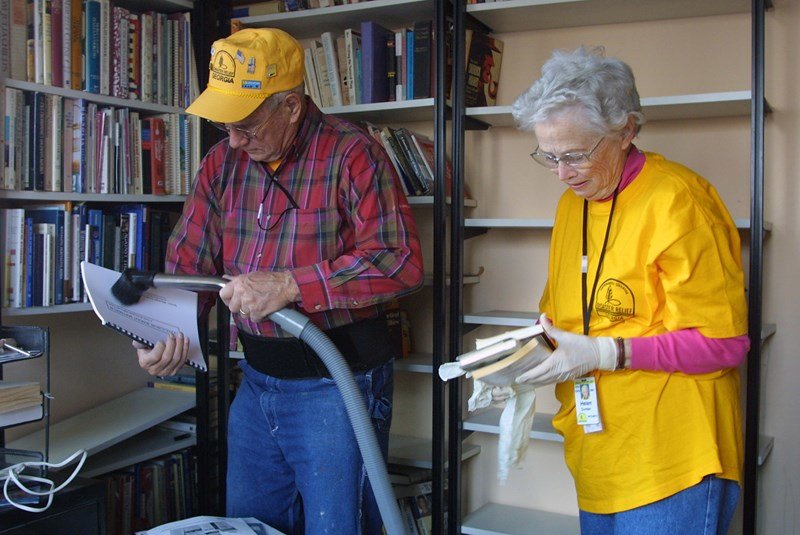 Helen Durden and her later husband Josh Durden of Dublin , Ga., are shown in this file photo from November 2001 cleaning dust from books in an apartment across the street from ground zero.

SOCIAL CIRCLE, Ga. – The sights and sounds of a devastated New York City are forever etched into the mind of Mike Hardy, a pastor who was part of the Georgia Baptist Disaster Relief team that responded to help survivors after the Sept. 11, 2001 terrorist attacks.

“It doesn’t seem like it’s been 20 years,” he said. “The memories are so vivid. We were overwhelmed by the devastation of it all. ”

Georgia Baptist Disaster Relief volunteers, along with all of America, are pausing on the 20th anniversary of the attacks to remember the day nearly 3,000 people were killed by al-Qaida terrorists who flew four commercial jets into the twin towers of the World Trade Center, the Pentagon and a Pennsylvania field.

For the  hundreds of Georgia Baptists who were deployed to New York, emotions are still raw after two decades.

“Whenever they found one of those innocent victims, it was as if the whole world stopped to honor them,” said Hardy, pastor of First Baptist Church in Social Circle, a Georgia town of 4,500. “The car horns stopped. Everything stopped. That was so memorable for me.”

Hardy served with a Georgia Baptist Disaster Relief feeding unit that operated under a tent the size of a football field. The tent had been erected near ground zero to serve meals all day every day to the responders searching through the rubble.

“It was eye-opening for me,” said Nancy Hubbard, a member of Fayetteville First Baptist Church and a Georgia Baptist Disaster Relief volunteer sent to help residents around ground zero rid their apartments of the dust generated by the explosion, fire and collapse of the towers. “I had thought the world wasn’t all that bad, but when you get up there and see noting but burning buildings and bodies, you realize that’s not true. I guess in my innocence I just didn’t realize people were that mean.”

Working in a hazmat suit, Hubbard worked all day and slept at night in a naval prison that had few amenities other than metal beds to sleep on.

“It’s just hard to believe people could hate you so much that they’d do that. It’s just so sad, so senseless.”

“It was a cremation-type of dust,” she said. “It was all over.” She also recalls the gratitude of the people of New York City showed to the Disaster Relief workers in their yellow uniforms.

“People on the subway would get up and ask us to take their seats,” she said. “They would shake our hands. They would hug us. They would thank us.”

As a Southern Baptist, Hardy said one of his biggest takeaways from his deployment to New York City was the absolute necessity of the Disaster Relief ministry.

“I was proud our Southern Baptist Disaster Relief,” he said. “And I was proud to be a part of it. When you’ve been a part of it and when you have seen the impact, you realize the value of that ministry.”

Charlene Kilgore, a member of First Baptist Church in Smyrna, said she came away from New York with the same appreciation for the ministry Hardy did.

Kilgore, who was new to Georgia Baptist Disaster Relief, was at home the morning of the 9/11 attacks. She watched the shocking scenes unfold live on television.

“My heart sank,” she said. “When they put out the call about going to New York, I said I’ve got to go,” she said.

In the weeks she spent at ground zero, Kilgore said she witnessed lots of heartbreak and tears.

“It’s gotten to the point where I really can’t watch any of the programs on it,” she said. “It’s too sad. It brings back the sights and the smells and everything about it.”

Kilgore said one of the most important takeaways from her deployment to New York City was that life is precious.

“Don’t take anything for granted,” she said, “because in a fleeting moment it could all be gone.”