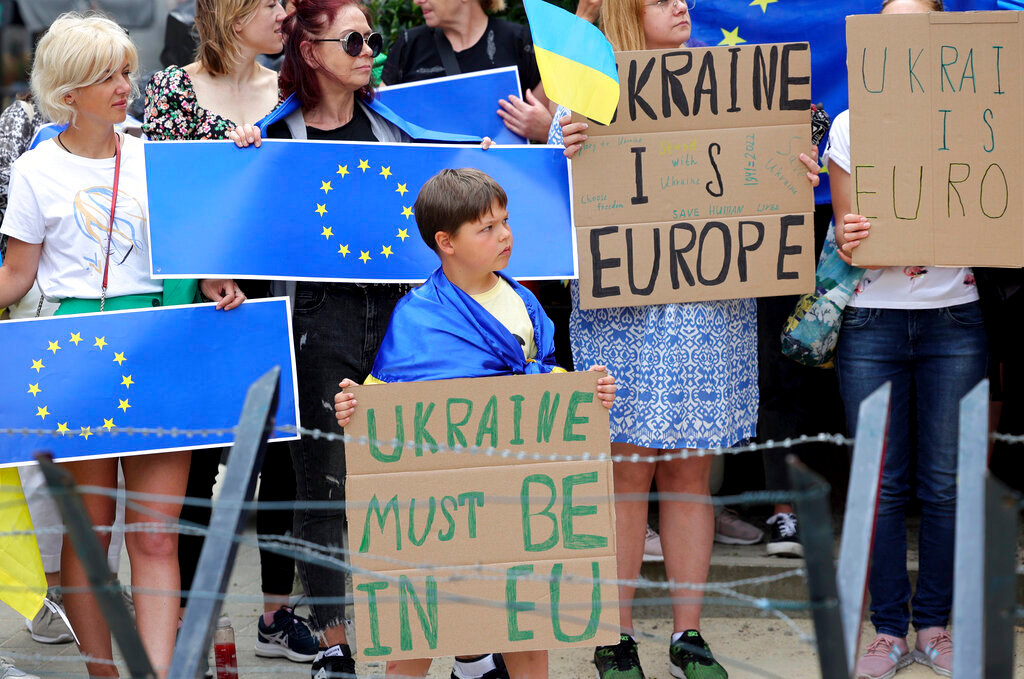 Protestors in support of Ukraine stand with signs and EU flags during a demonstration outside of an EU summit in Brussels, Thursday, June 23, 2022. (AP Photo/Olivier Matthys) 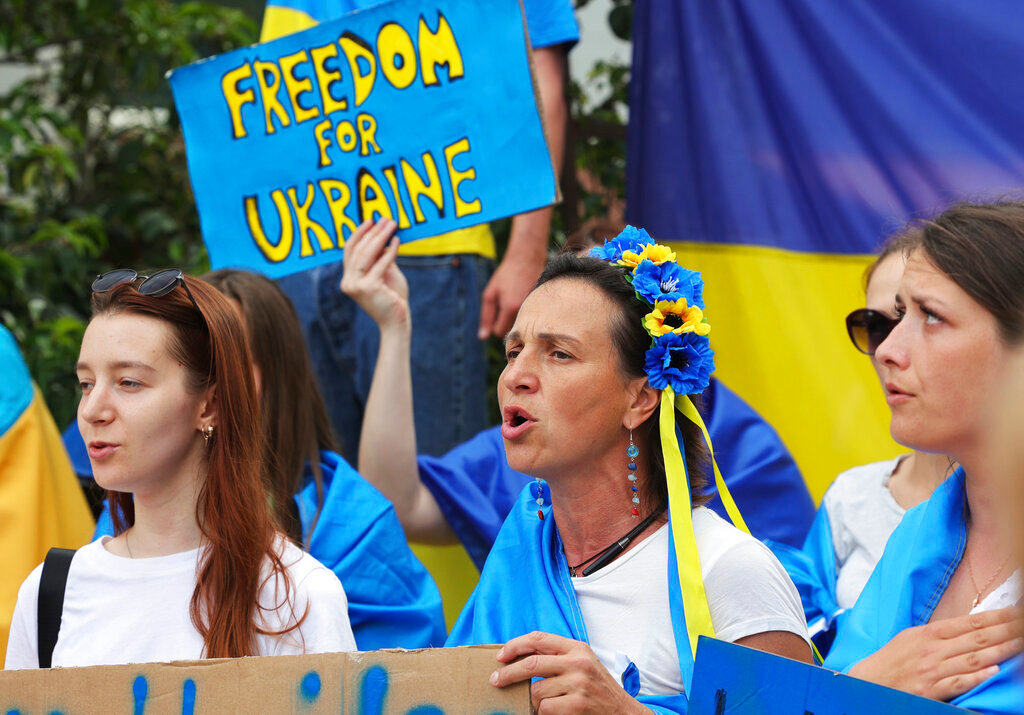 BRUSSELS (AP) — European Union leaders on Thursday are set to make Ukraine a candidate for joining the 27-nation bloc, a first step in a long and unpredictable journey toward full membership that could take many years to navigate.

Making Ukraine a contender now seems to be a done deal after national leaders were initially divided on how quickly to embrace the war-torn country's request to become an EU member, which the Ukrainian government submitted only a few days after Russia invaded its neighbor on Feb. 24.

According to several diplomats who spoke on condition of anonymity before a leaders' summit in Brussels, Ukraine will receive the unanimous approval required for candidate status and the launch of eligibility negotiations.

“This is a decisive moment for the European Union,” European Council President Charles Michel, the EU summit chair, said, describing the question of Ukraine's candidacy “a geopolitical choice that we will make today.”

Members of the European Parliament endorsed Ukraine's bid hours before the summit started, voting to pass a resolution that calls EU heads of state and government to “move without delay" and “live up to their historical responsibility."

The EU's 27 nations have been united in backing Ukraine’s resistance to Russia’s invasion, adopting unprecedented economic sanctions against Moscow. However, leaders were at first split on how quickly the EU should move to accept Ukraine as a member, with the Netherlands, Sweden and Denmark among the most skeptical.

But Ukraine's application got a boost last week when the EU's executive arm, the European Commission, gave its seal of approval based on the country's answers to a questionnaire received in April and early May.

Ukraine received another shot in the arm when the leaders of France, Germany, Italy and Romania visited the country and vowed to back its candidacy.

In another indication of how important EU candidacy is for Ukraine. President Volodymyr Zelenskyy said he spoke with 11 EU leaders on Wednesday, following calls with nine the day before. He said the meeting in Brussels will be an “historic session of the European Council."

EU candidate status doesn't give an automatic right to join the bloc, though, and doesn't provide any security guarantees.

It’s unlikely that membership talks could start before next year, with the prospect of the war dragging on for a very long time adding to the uncertainty.

The beginning of the accession discussions depends on Ukraine meeting essential political and economic conditions.

To be admitted, potential newcomers need to demonstrate that they meet standards on democratic principles and absorb a gigantic corpus of rules. To help countries with candidate status, the bloc can provide technical and financial assistance throughout negotiations, but can also decide to revoke the status if the required reforms aren't implemented.

European officials have said that Ukraine has already implemented about 70% of the EU rules, norms and standards, but they also have pointed to corruption and the need for deep political and economic reforms in the country.

“Considerable efforts will be needed, especially in the fight against corruption and the establishment of an effective rule of law,” Belgian Prime minister Alexander De Croo said. “But I am convinced that it is precisely the (post-war) reconstruction of Ukraine that will provide opportunities to take important steps forward.”

Leaders will also debate Thursday a recommendation for the European Commission to grant Moldova — a tiny, non-NATO country that borders Ukraine — EU candidate status. A stalled process for moving Western Balkans countries on the membership path is also on the summit agenda.