DULUTH — Georgia Baptist Convention President Mike Stone outlined a three-point presentation in his report at the Executive Committee meeting Dec. 12. In it, he purposed to broaden denominational representation, urge steps for future evangelistic impact, and strengthen a call to reach young people.

Stone's address came as the newly-elected Georgia Baptist Convention president on the same day he rotated off as Executive Committee chairman.

The Dec. 12 meeting at the Missions and Ministry Center in Duluth also welcomed 36 new Executive Committee members. In addition, attendees learned of another record-setting backpack collection effort for Appalachian children. Executive Director J. Robert White reported an increase in Cooperative Program giving. In anticipation of her retirement at the end of January, longtime assistant to the executive director Debbie Gaines was honored for nearly 29 years of service. And, committee members elected a new chairman and vice chairman among hearing various reports.

Cooperative Program ahead at end of November, year to date

Georgia remains a leader in Cooperative Program giving, White stated. Gifts contributed during November 2017, for instance, outpaced November 2016 by 4.21 percent. In year to date giving through the end of November, giving was ahead by .18 percent when comparing 2016 and 2017. Those levels place the Peach State at the forefront just ahead of Alabama for the month of November, he noted.

White further expressed his appreciation for gifts to Mission Georgia, as those totals reached $1,076, 971.38 through the end of November.

Stone presented three areas of focus over the next year as GBC president: developing a diverse group of leaders, name and present committees for two particular points of future interest of Georgia Baptists, and urge churches toward more involvement in reaching students.

The Building Proceeds Study Committee, said Stone, would be charged with developing recommendations after the eventual sale of the Missions and Ministry Center in Duluth.

"By the end of that sale, whenever it happens, it's possible there could be a $40-$50 million dollar net," Stone, pastor of Emmanuel Baptist Church in Blackshear, told The Index. "I believe there's wisdom to having a visionary plan on what to do with those proceeds before we have them in-hand.

"In those situations, one may be tempted to take care of some short-term needs. It would be wiser for the committee to make those decisions in advance."

The Cooperative Program Long-Range Study Committee would look at and present recommendations regarding the future CP budget of the Georgia Baptist Mission Board. 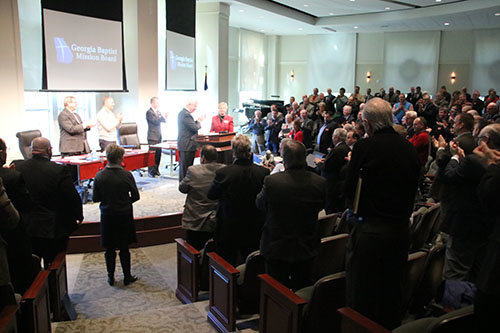 The breadth of the committee lies in looking at the past, present, and future. One responsibility would be to study the ten-year decline of Georgia Baptist CP giving. Another would be looking at other state conventions' recent Cooperative Program re-allocations. In particular, the committee would discuss the effects of those decisions on the convention.

The end result, said Stone, would be to seek out God's will in how to best use Cooperative Program gifts.

"What would the current effects of a 50/50 split be in Georgia?" he theorized. "It's not sufficient to say it can't be done. It just may be that current realities don't make it possible."

In other words, it's important to study the cost of moving to a 50/50 split in CP giving between Georgia and the national convention. Moving too quickly would – not could – result in losing ministries.

Upcoming "listening sessions" around the state, Stone added, would provide opportunities for Georgia Baptists to voice their ideas and concerns.

Making moves to reach the next generation

Stone joined state missionary Steve Parr and White in urging churches to become involved in the Reaching Next Gen movement. The Blackshear pastor told of enlisting students at his church in learning to tell their story of salvation. Furthermore, Emmanuel Baptist has moved toward an intergenerational ministry, with discipleship occurring from and through various age levels.

That focus on intergenerational ministry, he said, would become a major part of his preaching ministry as well as next year's GBC annual meeting.

Parr encouraged pastors to use resources at ReachingNextGen.com. Also, he said weekly email videos such as the one below would help those who may be new to the Reaching Next Gen movement.

"They will give you that nudge, that push, that inspiration to encourage you and your church ... to help reach the next generation."

Why ReachingNextGen from Georgia Baptist Mission Board on Vimeo.

Parr also presented a plan to get students more in tune with prayer.

" gives them an awareness of their peers who are unchurched. Not only are they praying for them, but they're more inclined to invite them to places where the gospel is being shared."

White agreed on the movement's crucial standing for today's students.

"It's vitally important for our kids to pray for other kids. Praying for their friends to come to faith in Christ; teenagers praying for other teens.”

A familiar face in a new place

For many years, Georgia Baptists have been familiar with Bill Barker's ministry in Appalachia. Since 2012, they've been particularly involved through sending backpacks to the area's children.

In 2017, Georgia Baptists established another benchmark by sending 36,353 backpacks, accounting for half of the total number sent from all state conventions. Speaking to the Executive Committee, Barker shared how Georgia Baptists, since 2012, have given Appalachian children approximately 163,312 backpacks.

In 2017, Georgia Baptists established another benchmark by sending 36,353 backpacks, accounting for half of the total number sent from all state conventions.

White further shared how Georgia Baptists will become even more familiar with Barker. Beginning in January, Barker will be a new sort of missionary through the Georgia Baptist Mission Board, serving as director of the Appalachian Mountain Ministry.

In other events, state missionary Keith Hamilton presented a Resolution on Church-Provided Protection Benefits. The resolution, Hamilton stressed, would address a growing crisis in retiring ministers and their spouses or widows having insufficient funds during their senior years.