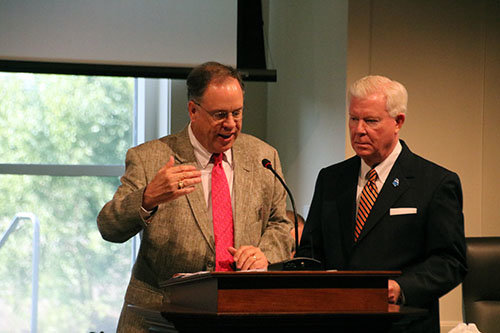 DULUTH — Executive Committee members unanimously voted to approve a $41.3 million 2019 budget at the Missions and Ministry Center on Sept. 11.

Messengers to the annual meeting, which will be held Nov. 12-13 at Second Baptist Church in Warner Robins, will vote for final approval of the budget.

In presenting the budget, Chairman Wayne Roe, pastor of First Baptist Tifton, reminded those gathered of what the figure really represents.

“When I go to a finance committee meeting I’m reminded that those are dollars and dimes of children emptying their piggy banks, of young adults who have home mortgages and are saving for college funds, and senior adults on fixed incomes. It consecrates sacrifice. These are sacred dollars.”

Roe went on to explain that the proposal reflected a straight allocation budget, rather than the jointly-funded budget of recent years.

Over half of budget to non-GBMB ministries

White pointed out the distinction between the extension ministries and those funded directly by the Mission Board.

“Those ministries … operate under their own boards,” he noted. “We don’t make decisions for them. No money is spent on Georgia Baptist missions and ministries conducted by the Executive Committee employees until 53.69 percent of [CP] receipts are given to others.”

Since the Cooperative Program’s inception Southern Baptists have understood the need to share in operating costs. That position was affirmed at the 2010 SBC annual meeting in Orlando.

“A few years ago, we changed our approach to the budget because of confusion caused by the ‘shared’ approach,” White later explained to The Index. “The ‘straight line’ approach states the division of funds simply, but we reiterate annually that a portion of the funds allocated to Georgia represent the SBC’s contribution to the operation of the Cooperative Program. Those costs include such things as promotion, business office functions, and accounting processes including accountability for the funds.”

Investing in the future

White pointed out the Mission Board’s dedication to church planting, collegiate ministries, and church ministries. Slightly more than 25 percent of the GBMB allocation is directed to those line items. 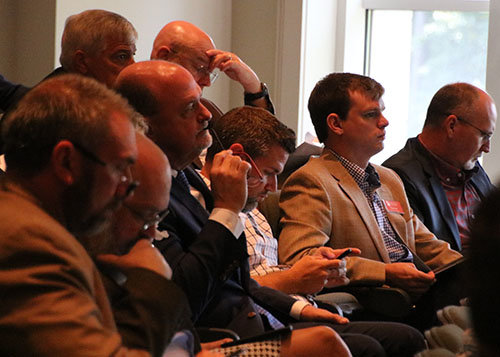 “Our convention is investing heavily in our future through supporting ministry to our young people,” White said. “I believe with all of my heart that the future of Christian ministry around the world is largely dependent upon ministry that we provide to our young people, starting with our children and going through collegiate ministries.”

Roe added that the budget reflected a 2 percent cost of living increase for convention employees. However, due to unfilled vacancies and streamlined staff with part-time employees and practitioners, the increase will only cost $174,069 even while upping the total employee count from 166 to 168.

Roe also noted how salaries and benefits make up only 35.68 percent of the budget, significantly lower than the 45-55 percent seen in most Southern Baptist churches.

“The Georgia Baptist Mission Board, in 2017, sent 55.29 percent of all mission dollars to the Southern Baptist Convention,” Roe continued. “These amounts include CP, Lottie Moon, and Annie Armstrong, with other designated offerings.