NAMB “exhausted every option” to rectify prior to litigation, says its president 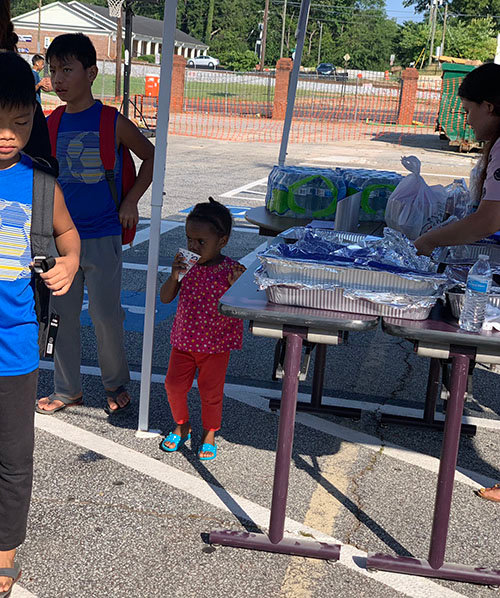 Children receive school supplies, food, shoes, and backpacks at the Clarkston Ministry Center Saturday, Aug. 3. Since its inception two-and-a-half years ago, the hub of the North American Mission Board has used a variety of ministries to assist the community. Construction plans to further develop the property have been put on hold due to a dispute with the city of Clarkston. MYRIAH SNYDER/ Special

ALPHARETTA — Since becoming a hub for refugees, Clarkston International Bible Church (CIBC) and the North American Mission Board have continued to lay groundwork for future projects while improving efforts for ministry in what has been deemed the most diverse city in America.

To the casual observer that relationship may have taken a hit with NAMB suing the city last week after the latter halted construction of a ministry complex for refugees. At issue are two homes local residents say should be preserved for historical and aesthetic reasons. After acquiring permits for new construction earlier this year, NAMB filed demolition permits on April 26. Six days later, the city passed a six-month moratorium on demolition in what has come to be called the Potential Historic District.

The city of Clarkston created a Historic Preservation Commission earlier this year but had yet to appoint members to the group. NAMB contends that since the demolition permits had already been filed prior to the moratorium, the city is acting retroactively.

In an interview this morning with The Christian Index, however, Ezell reiterated the Clarkston Ministry Center’s good standing in the community.

“Southern Baptists have always been going to the nations,” he said. “Now, more than ever, you can reach the nations in this nation.” A large part of that, he added, was “hav a heart for compassion and mercy ministries.”

Ezell clarified the AJC’s citing the cost of the project at $15 million. “It will be roughly around $10 million. When we first started, we had a much bigger plan in mind, but have adjusted it since then to accommodate the city. We’ve worked very hard to make those changes,” he pointed out. 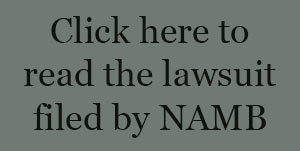 Government actions like those leading to the lawsuit should be a concern for churches and landowners everywhere, he pointed out.

“We own property and … to retroactively do this violates our basic rights. This is not only to protect our property, but others. It could affect other churches. Who’s to say where it can stop?”

Plans for the ministry complex include a medical center, outdoor market that will serve as a “business incubator” for refugees, a gym, playground, and soccer fields. Currently, Ezell added, volunteers must use accommodations on-site such as sleeping on the gym floor. NAMB wants to construct facilities housing up to 80 volunteers a week. That would include church groups on short-term trips as well as longer stays for GenSend students and those serving through the Journeyman program.

Seven such ministry hubs across the country, Puerto Rico

News of NAMB’s potential partnership with Clarkston International Bible Church first broke in early 2017, following the former’s board meeting in Ontario, California. That began a 60-day period of discussions – including seven question-and-answer sessions – over details of the arrangement that was passed unanimously by church members on May 7, 2017. A worship service featuring the eight ethnic congregations at CIBC celebrated the event.

The Clarkston Ministry Center is one of seven such Send Relief ministry hubs throughout the country, each with a focus on a need particular to that area. They are:

Plans are for NAMB to establish up to 25 such centers. Ezell told The Index. With Clarkston, hopes are that churches can see the inroads made through ministry with refugees and various ethnic groups and apply that to their community.

“We want to encourage a ‘model and multiply’ mentality among Southern Baptists,” he said. “Everything we do is about reaching others with the Gospel of Christ.”

Private donors are funding the majority of the construction at the Clarkston Ministry Center, supplemented through reserves given through the Cooperative Program. “For the last seven years we’ve been consistently putting money back for projects like this,” Ezell said.

An imprint in Clarkston

NAMB’s partnership with CIBC included maintenance at the church and upgrades for future ministry. The former gym was completely renovated and now includes the current worship center, activity center, office space, Sunday School rooms, and kitchen. Other structures were torn down to make way for future buildings.

“Everything in the area has been completely renovated and updated,” Mike Ebert, NAMB executive director for Public Relations, told The Index. 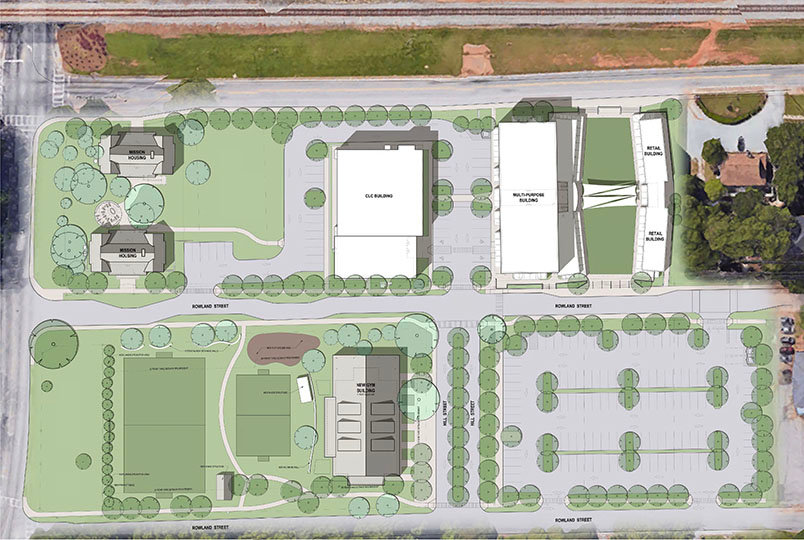 Plans for the Clarkston Ministry Center include soccer fields, a gym, and missionary housing. Click to enlarge. Artist rendition courtesy of NAMB

Since Send Relief and NAMB purchased CIBC, various ministries have taken shape for the city. Those include after-school programs, theological education through Clarkston Bible Institute, and food distribution (other churches can partner) through Hope for the Hungry. While the church and NAMB operate the after-school program for middle and high school students, the program for elementary (and a few middle school students) is owned by NAMB missionary Bennett Ekandem, who also owns the Family Heritage Foundation and raises support for the program.

At least 20 church mission groups, GenSend summer missionaries, and CIBC interns made up the more-than-300 volunteers needed to help facilitate those ministries. Those volunteers, for the moment, stay at nearby churches, Air B-n-Bs, or hotels. Training comes through MinistrySafe before arrival and, after arrival, an orientation on cross-culture ministry.

Dateline to a moratorium

The properties containing the houses at the center of the lawsuit were included in the original purchase by NAMB. Since then, the entity has maintained the grounds even as the buildings themselves have remained vacant and uninhabitable.

After NAMB submitted initial plans for the development to the Clarkston City Council in July 2018, certain members requested the development be delayed for community input. NAMB agreed and hosted a town hall on Aug. 11, 2018 for that purpose. According to the lawsuit filed, “certain members of the public” expressed concern “that the Ministry Center could bring more refugees to Clarkston.”

The moratorium was the only subject to be discussed at a special called Clarkston City Council meeting April 30. In the minutes for that meeting under “Need/Impact” for the moratorium, it is stated that “there are currently no pending applications seeking to demolish any structures within the Potential Historic District,” despite NAMB having done so a week earlier.

Following the passage of the moratorium, NAMB and the city continued to negotiate but ultimately came to an impasse.

Ezell described NAMB and CIBC’s relationship with the city as “very amicable.” Clarkston Mayor Ted Terry affirmed the work of CIBC’s ministry to refugees shortly after the announced partnership with NAMB.

“Those who benefit from the ministries love Send Relief,” said Ezell. “We just want to continue to meet needs and see lives changed.”

This story was updated Aug. 8 to reflect clarification on the after-school programs run by NAMB, CIBC, and Bennett Ekandem.