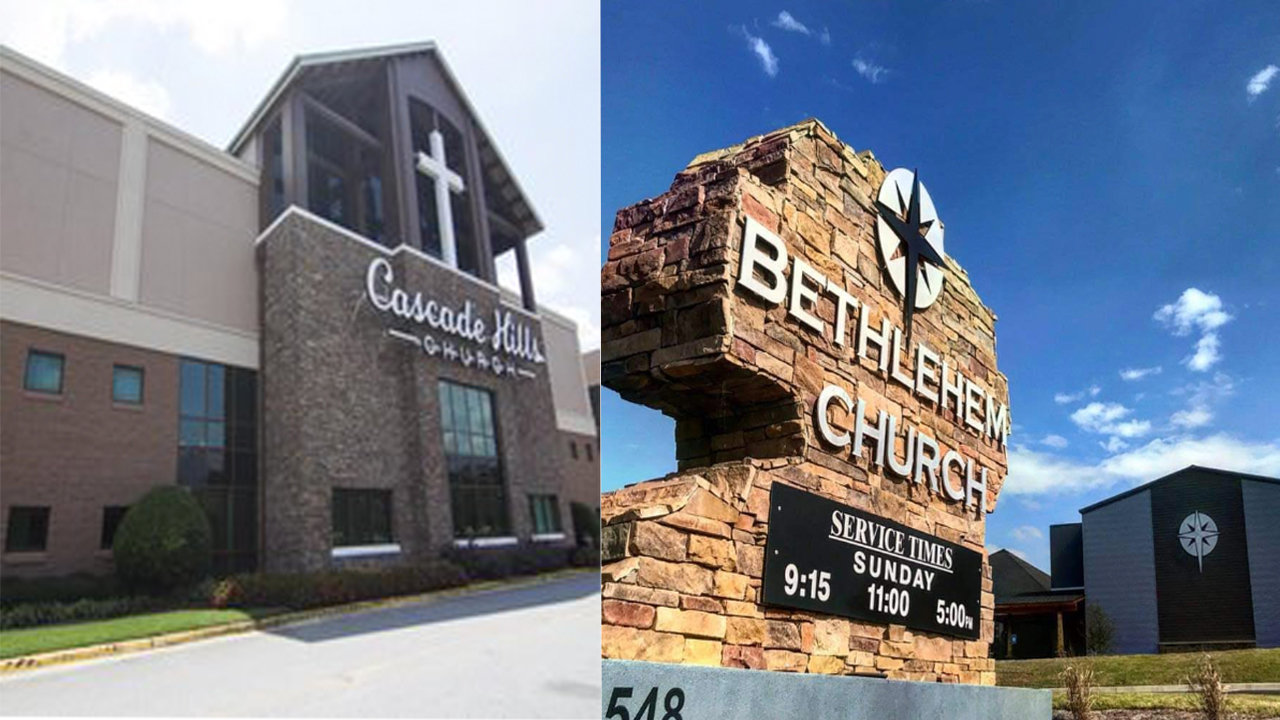 Bethlehem Church in Bethlehem, Georgia and Cascade Hills Church in Columbus, Georgia are among the 34 Southern Baptist congregations listed with other evangelical churches that are the fastest growing and largest congregations in the nation. GOOGLE IMAGES/Special
Posted Tuesday, October 1, 2019 4:18 pm
Baptist Press

Bethlehem Church in Bethlehem, Georgia and Cascade Hills Church in Columbus, Georgia are among the 34 Southern Baptist congregations listed with other evangelical churches that are the fastest growing and largest congregations in the nation. GOOGLE IMAGES/Special

NASHVILLE (BP) — Thirty-four Southern Baptist congregations are among the fastest growing and largest evangelical churches in the latest Outreach 100 tally compiled by Outreach Magazine and LifeWay Research. Two of those are Georgia Baptist churches.

"Tracking the fastest growing churches gives us a glimpse into some of the most effective ministry work in America," LifeWay Research Executive Director Scott McConnell told Baptist Press. "These congregations have the privilege of seeing many lives changed while maintaining the ability to adapt quickly and do ministry in a scalable way."

Mercy Hill Church in Greensboro, North Carolina, planted by The Summit Church in the Raleigh-Durham, North Carolina, area, is the fastest-growing Southern Baptist congregation on the list, ranking 12th among all churches who completed the self-reported survey.

The Summit Church, where SBC President J.D. Greear is senior pastor, planted Mercy Hill Church in 2012. Mercy Hill reported an average attendance of 2,671 in February and March, a growth of 31%, at its four locations. Andrew Hopper is senior pastor of the church that last ranked in 2017 as the 27th fastest growing church.

Among the largest churches, Saddleback Church in Lake Forest, California, is the top ranking Southern Baptist congregation. The 19-campus church with Rick Warren as senior pastor averaged 24,195 in attendance during the reporting period, according to Outreach100. Saddleback was the eighth largest church in the survey in 2018, and the second largest among Southern Baptists.

"Certainly the Outreach 100 is a celebration of numbers, a recognition of church addition and multiplication," Outreach100.com said in explaining the report's methodology. "Ultimately, though, the Outreach 100 is not so much about numbers as it is the individuals those numbers represent — people who have found hope in Christ and the churches pointing them to [H]im."

Mercy Hill, which came in first among the fastest-growing churches, was among 17 Southern Baptist congregations recognized for growth.

5 Point Church in Easley, South Carolina, led by Dean Herman, was the second-ranking Southern Baptist church and 21st among the 100. The church has an average attendance of 2,352 and exhibited 26% growth, comprising an additional 489 attendees.

Ranked third in growth among Southern Baptists is Sandals Church in Riverside California, 25th among the 100, experiencing 14% growth with 9,559 in attendance.

To be recognized for growth, churches must average more than 1,025 in attendance and report a numerical gain of 176 or more and a percentage gain of at least 3 percent.

Following Saddleback in size among Southern Baptists is Second Baptist Church in Houston, Texas, where former SBC President H. Edwin Young is senior pastor. The church reported an average attendance of 20,460 at its six locations and ranks eighth among the top 100. The ranking is up from 2017, when Second Baptist was the 11th largest among participating churches, with 20,885 in attendance.

Pinelake Church in Flowood, Mississippi, where Chip Henderson is senior pastor, is the third largest Southern Baptist church on the list, ranking 22nd among the 100 and reporting 11,042 in average attendance at its five locations.

Ranking fifth among Southern Baptists is McLean Bible Church in Vienna, Virginia, led by David Platt, former president of the International Mission Board. The church is 28th among the 100 and reported an average attendance of 10,101 among its seven locations.

Following is Sandals Church in Riverside, California, which ranked in both growth and size. The church is 29th in size with 9,559 in attendance.

To make the list of largest churches, congregations must report an attendance of 4,328 or more, Outreach100.com said.

The full lists are available here.