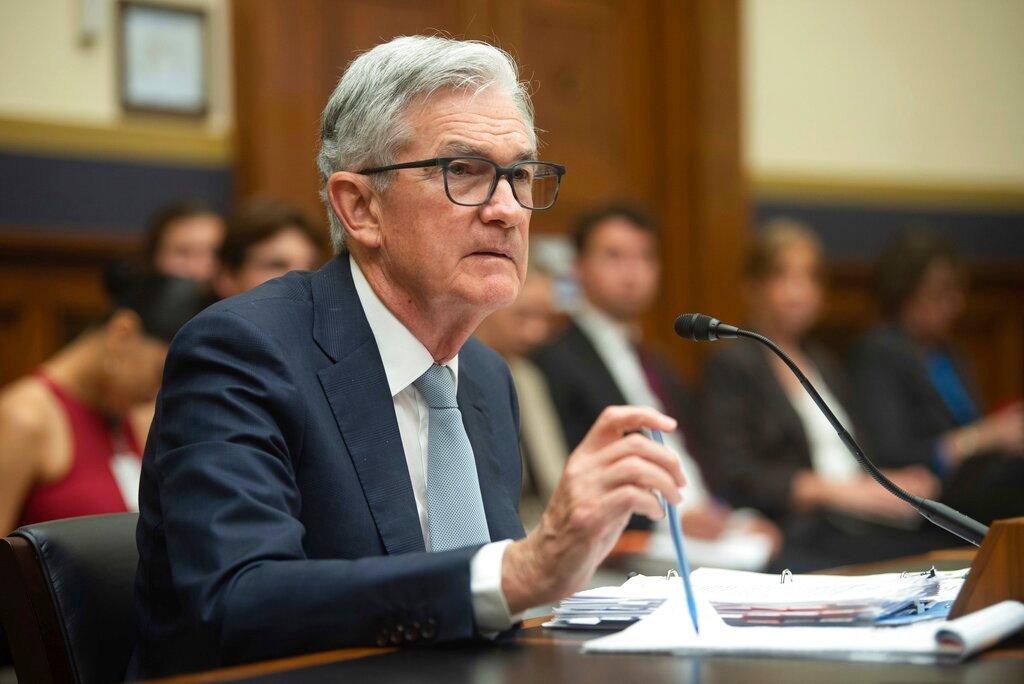 WASHINGTON (AP) — Federal Reserve officials were concerned at their meeting last month that consumers were increasingly anticipating higher inflation, and they signaled that much higher interest rates could be needed to restrain it.

The policymakers also acknowledged, in minutes from their June 14-15 meeting released Wednesday, that their rate hikes could weaken the economy. But they suggested that such steps were necessary to slow price increases back to the Fed's 2% annual target.

The officials agreed that the central bank needed to raise its benchmark interest rate to “restrictive” levels that would slow the economy’s growth and “recognized that an even more restrictive stance could be appropriate” if inflation persisted. After last month's meeting, the Fed raised its key rate by three-quarters of a point to a range of 1.5% to 1.75% — the biggest single increase in nearly three decades — and signaled that further large hikes would likely be needed.

The Fed has been ramping up its drive to tighten credit and slow growth with inflation having reached a four-decade high of 8.6%, spreading to more areas of the economy. Americans are also starting to expect high inflation to last longer than they had before — a sentiment that could embed an inflationary psychology and make it harder to slow price increases.

And with midterm elections nearing, high inflation has surged to the top of Americans’ concerns, posing a threat to President Joe Biden and Democrats in Congress.

At a news conference after last month's Fed meeting, Chair Jerome Powell suggested that a rate hike of either one-half or three-quarters of a point was likely when the policymakers next meet late this month. The minutes released Wednesday confirmed that other officials agreed that such an increase would “likely be appropriate.” A rate hike of either size would exceed the quarter-point increase that the Fed has typically carried out.

Last month, the Fed released projections that showed that the officials expect to raise their benchmark rate to 3.4% by the end of this year. At that level, the Fed’s key rate would no longer stimulate growth and could weaken the economy. The minutes suggest that the policymakers could potentially raise rates above that level.

At the time of last month's meeting, the policymakers said the economy appeared to be expanding in the April-June quarter, with consumer spending “remaining strong.” Since then, though, the economy has shown signs of slowing, with consumer spending falling in May, after adjusting for inflation, for the first time this year. Home sales are plunging as mortgage rates have jumped, accelerated by the Fed’s rate increases.

The signs of economic sluggishness have intensified fears that high prices and rising rates could send the economy into a recession late this year or next year. Such concern has further complicated the Fed’s policymaking because a recession would normally lead it to cut rates to stimulate growth.

The Fed had been expected to raise rates by a half-point at last month's meeting but ended up announcing a three-quarter point hike instead. At his news conference afterward, Powell mentioned recent economic reports that had heightened concerns about high inflation. Those reports included inflation data for May, which showed that the pace of price increases reached a 40-year high.

Powell also cited a survey of consumer sentiment conducted by the University of Michigan that said consumers’ longer-term inflation expectations were starting to rise more quickly. That unnerved Powell and other Fed officials, because if people expect higher inflation, that sentiment can lead to an acceleration of prices. Workers could, for example, demand higher pay to cover their expectation of rising bills and expenses, leading companies, in turn, to raise prices further to offset their higher labor costs.

The Fed is seeking to convince the public that it will rise to the challenge and tame the pace of price increases, with the goal of keeping Americans’ inflation expectations in check.

There is “a significant risk now facing the (Fed) that elevated inflation could become entrenched if the public began to question the resolve” of Fed officials to combat higher prices, the minutes said.

As a result, the minutes said, tighter credit and “clear and effective communications” are critical to controlling inflation.