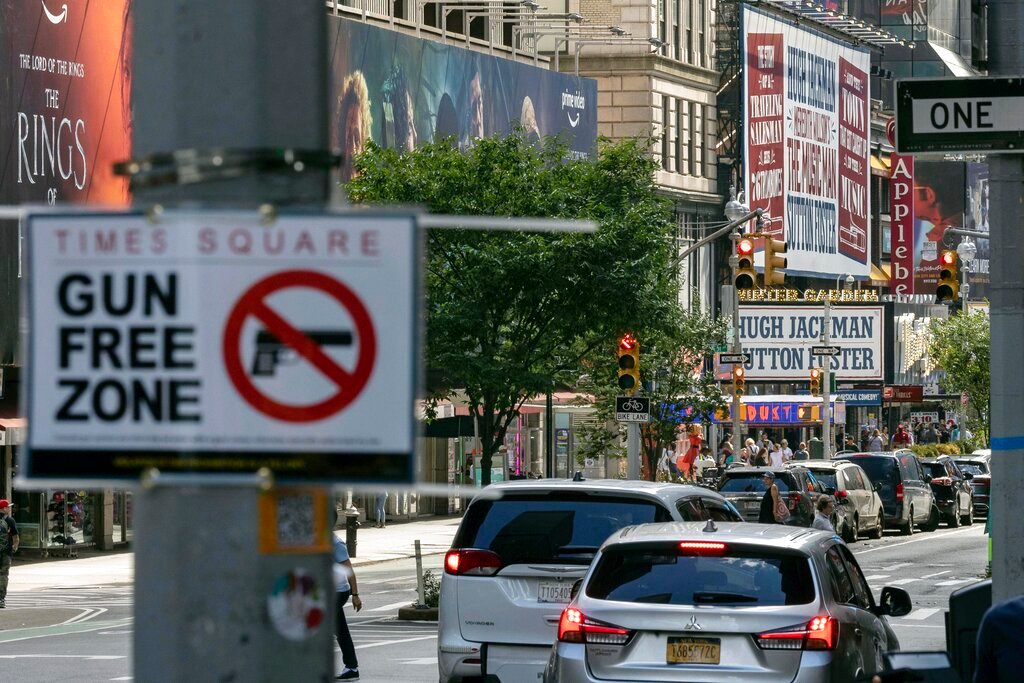 ALBANY, N.Y. (AP) — New York's latest attempt to restrict who can carry a handgun in public and where firearms can be brought was picked apart Thursday by a federal judge, who ruled that multiple provisions in a state law passed this year are unconstitutional.

In a ruling that doesn't take effect immediately, U.S. District Judge Glenn Suddaby struck down key elements of the state's hurried attempt to rewrite its handgun laws after the old ones were struck down by the U.S. Supreme Court in June.

The state can't ban people from carrying guns in New York City's subway system or Time Square, the judge ruled, though he said it did have a right to exclude guns from certain other locations, including schools.

Several of the state's new licensing rules went too far, he wrote, including one that required applicants to be of “good moral character,” and another that made applicants turn over information about their social media accounts.

The end result was a licensing scheme that prohibited people from carrying a handgun for self-defense unless the applicant could persuade licensing officials that they wouldn't use it to hurt themselves or others, the judge wrote.

“Simply stated, instead of moving toward becoming a shall-issue jurisdiction, New York State has further entrenched itself as a shall-not-issue jurisdiction. And, by doing so, it has further reduced a first-class constitutional right to bear arms in public for self-defense... into a mere request,” wrote Suddaby, who sits in Syracuse.

Suddaby put his decision on hold for three days to allow the state to challenge it in a higher court.

Legislators rewrote the state's handgun laws this summer after a Supreme Court ruling invalidated New York's old system for granting permits to carry handguns outside the home. The high court struck down the state’s longstanding requirement that people demonstrate an unusual threat to their safety to qualify for such a license.

The new law, which went into effect Sept. 1, broadly expanded who could get a handgun license, but it increased training requirements for applicants and required them to turn over more private information, including a list of everyone living in their home. The state also created a long list of places where firearms would be banned.

Suddaby’s ruling upheld the state’s right to exclude guns from certain “sensitive locations,” but only in instances where there were “historical analogues” for such rules, meaning guns have been banned from such places in the past.

Rules prohibiting most people from carrying guns into schools, government buildings, polling places and places of worship were OK, the judge wrote. But the state couldn’t put new bans on people from carrying handguns on public transportation systems, in summer camps or places where alcohol is consumed.

Suddaby also dealt a blow to a provision prohibiting people from bringing guns onto someone else's property unless the owners give permission — by posting a sign in a shop window, for instance.

There have been several federal challenges to the new law from gun rights advocates who argue the legislation violates the Second Amendment and free speech rights.

This lawsuit was bought by six gun owners from upstate New York who claim the law infringes on their constitutional rights. Most of the plaintiffs have licenses to carry and argue the law keeps them from holding a weapon in designated sensitive places like state parks or church.

One plaintiff intends to apply for a carry permit but is unwilling to share social media posts or character references with investigators, according to the federal complaint.

Suddaby telegraphed his ruling five weeks ago when he threw out a previous challenge to the law on technical grounds. The plaintiff in that case then teamed up with five other gun owners and sued again, expanding the list of defendants to include state district attorneys and sheriffs who were charged with enforcing the law.

New York is among a half-dozen states that had provisions of their gun laws invalidated by the Supreme Court.