The recently-finished renovations at First Baptist Church in Calhoun feature a new entryway to People Street, a section connecting the new construction and providing a place to build relationships. FBC CALHOUN/Special

CALHOUN — In 2013 First Baptist occupied a place shared by many churches.

Members felt the pinch of The Great Recession, as did, of course, the church itself. What's more, facilities needed an upgrade to better position the congregation for ministry opportunities in Calhoun, located smack-dab between Atlanta and Chattanooga. The town has been referred to as sitting at a crossroads of those metropolitan areas. The church was at a type of crossroads itself.

When John Barber arrived as pastor in 2013, the church had been in a long period of decline. "The facilities needed attention aesthetically," he commented, "but that was also symbolic of the need for change in terms of ministry. We had to look at who we were, what we were doing, and realize we couldn't do church the same way and expect different results." 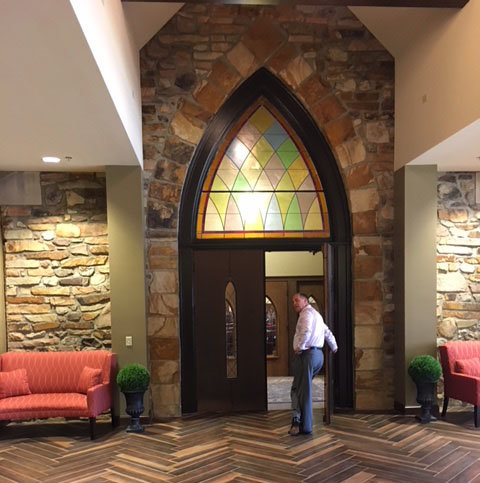 What used to be an exterior door to the sanctuary is now an interior door as part of First Calhoun's People Street. MARCUS MERRIT/Special

Members and visitors are seeing those changes, both physical and methodogical, at the church.

Two education buildings – one a three-story structure and the other one story– are the key additions. Due to that, groups moved around a bit. Children and preschoolers got a new area, which brought median and senior-aged adult classrooms closer to the sanctuary. An 8,000-square-foot "People Street" commons area ties it all together.

"Everything is connected and handicap-accessible," said. Barber. "We've also installed ramps and stairs side-by-side as well as elevators."

Construction began in July 2016, he added, and recently completed in November. He estimates paying off the $3.5 million project will take 6-8 years.

To meet current and future opportunities

The changes, Barber asserted, grew out of a desire to better connect with and reach the community. "Before, so much of the facilities were not built for how we would be using them today," he explained. "We didn't have a well-designed children's and preschool space. Senior adult and median adults space had been built off the old 'department' model (think assembly room and breakout rooms). Also, those rooms were furthest from the sanctuary."

First Baptist, founded in 1852, is as old as the town itself. In 1975 the congregation voted to move about a half-mile to a former school building, essentially swapping property with the city. Church members recall how classrooms where they learned a long time ago to read now serve to teach Scripture. 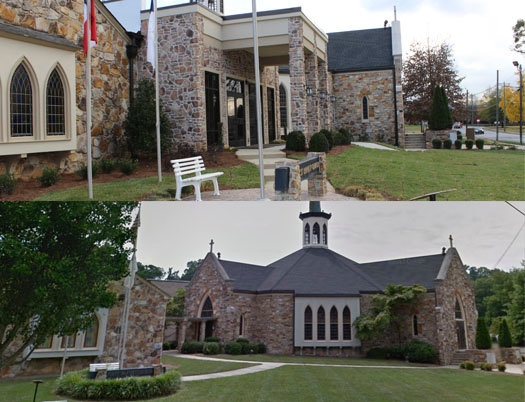 At top, a photo of recently-completed renovations to First Baptist Calhoun shows the gap filled in between the education and worship space, seen in the Google Street photo from 2013, below.

Maybe it has something to do with the location. In the last ten years the church has experienced a 23 percent growth in Sunday School enrollment. In addition, Cooperative Program giving has risen from 6.5 percent in 2014 to 10.7 percent in 2016. According to the latest figures available, there are 989 resident members with an average worship attendance of 432.

While the church's physical changes are important, Barber emphasized the need for a change in perspective.

"We were kind of stuck in the 1960s in terms of approach, ministry style, even office structure," he said.

In many ways, he added, the recent project accomplished aesthetic needs. In a larger picture, though, it set up the church to continue in momentum for growth and ministry.

"It helps us focus on the present, and simultaneously, the future," he added.

An additional 90 seats to the sanctuary allows more room for members and visitors to enjoy the technological upgrades to First Baptist Church. FBC CALHOUN/Special

In 2013 there were two staff positions at First Baptist – Barber and a secretary. Looking at things long-term, he knew more help would be needed.

Preschoolers and children at First Baptist Church in Calhoun stand around soup cans donated to a local food bank.

Today, five ministry staff work alongside multiple secretaries in a modern office setup. Upgrades to the music ministry suite include instrumentation, lighting, and sound quality. Minister of Music Lance Cole has built the church's orchestra to a 12-instrument unit since his arrival. The sanctuary gained an additional 90 seats as well.

Other technological advances include wifi for attendees more used to a digital Bible than printed one. And since the Texas church shooting last fall, a revamped security system and protocols have placed safety measures at a premium.

"Our most precious resource are those children," noted Barber, referring to the security upgrades. Each change, he pointed out, becomes a piece of a larger puzzle. 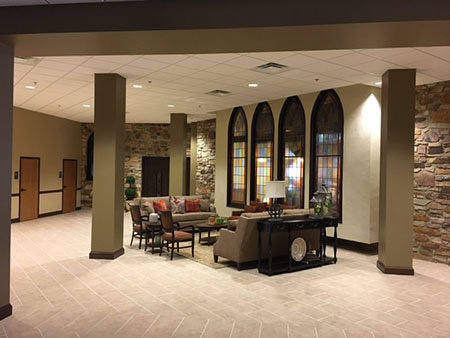 The interior of the church's recent renovations include spaces for congregating and conversation. MARCUS MERRIT/Special

"It's about building relationships and casting a vision. We're taking small, but significant, steps moving from point A to point B.

"It's helped us transition to a multi-generational worship experience. There's less formality with more participation and emphasis on substance than style. We want to focus on God's word and our purpose in worshiping Him."

First Baptist plans more events to reach its communiy. On April 28 Thomas Hammond, pastor of Alpharetta First Baptist Church, will be the featured speaker at a men's dinner. The church's goal is to have 200 men attend for the message on leveraging their leadership potential for God in their home, businesses, and communities.

"The church is strong, stable, and healthy," Barber proclaimed. "It's poised for a significant season of the Lord's blessing. We're excited about the next couple of years. Our best days are ahead."

UPDATE: Previously The Index misreported the construction timeline as having completed six months ahead of schedule.