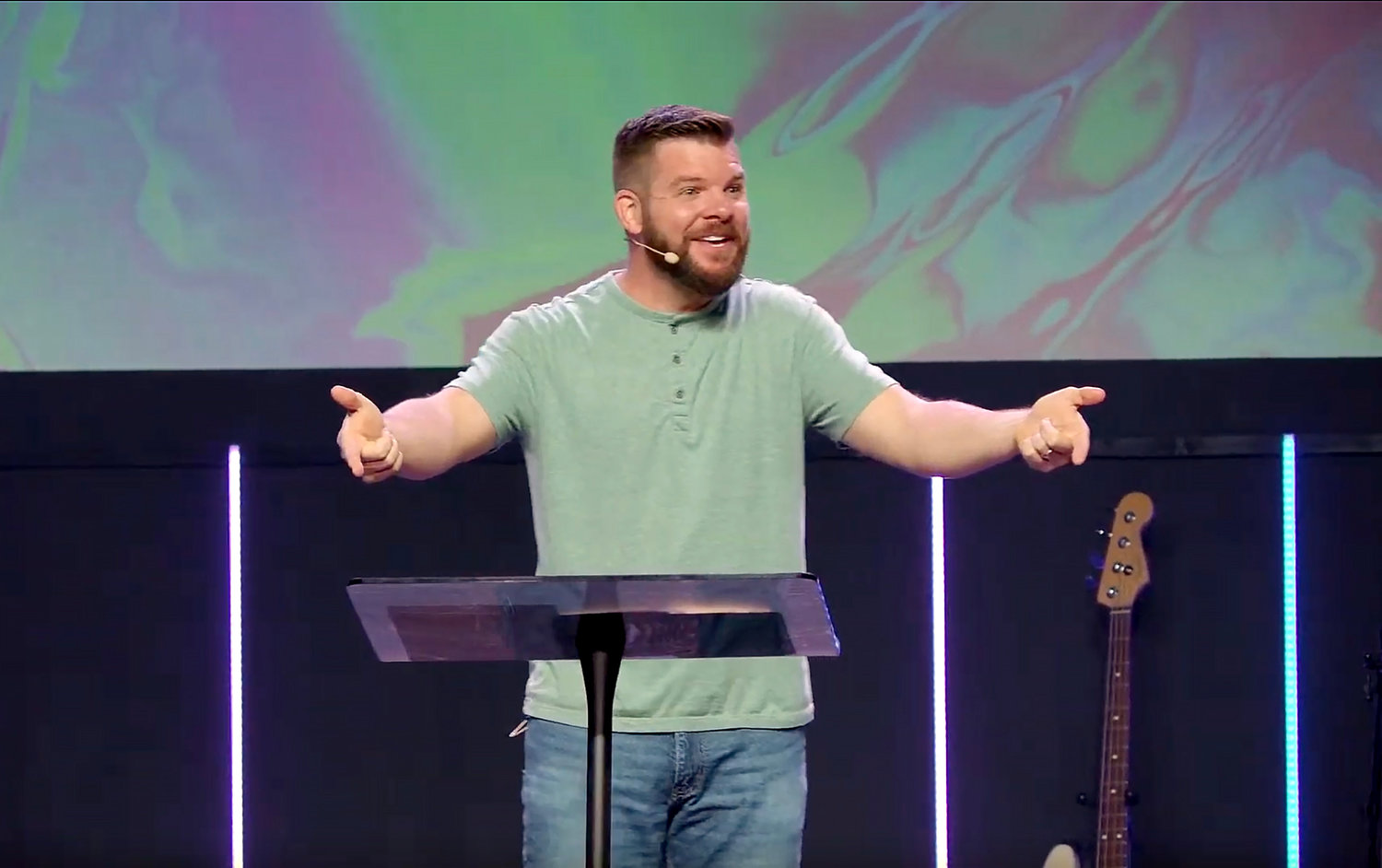 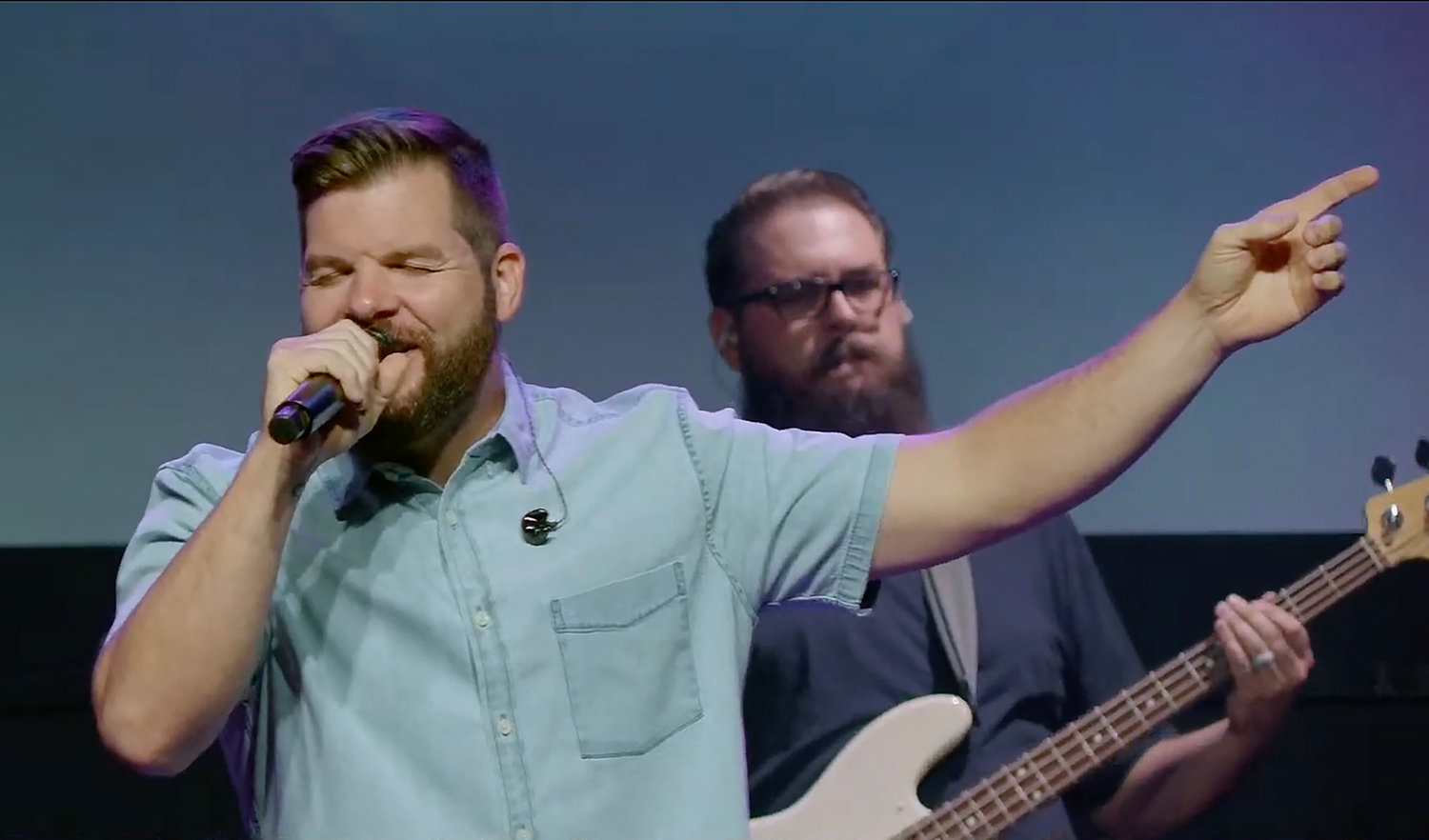 TJ Mauldin sings during a worship service at First Baptist Church of Tifton on July 24, 2022. Mauldin has been called as the lead pastor at the church where he has served for hte past 11 years.
Previous Next
Posted Wednesday, August 10, 2022 10:37 am
By ROGER ALFORD, The Christian Index

TIFTON, Ga. – TJ Mauldin is one of those rare individuals who can sing like he belongs on a record label and preach so vividly that Bible passages come to life.

That’s how people describe the 37-year-old who has been called as the new lead pastor at First Baptist Church in Tifton.

Mauldin arrived at the southern Georgia church 11 years ago as a 26-year-old, part-time contemporary worship leader strumming an acoustic guitar, but Pastor Wayne Roe and others quickly recognized that he was an incredibly gifted preacher, too.

So, no one was surprised that Mauldin, also a skilled pianist, was called as lead pastor when Roe announced his retirement.

“With someone like TJ already here and in place and having proven his gifts, it was not a difficult choice for the search committee,” Roe said.

Mauldin, a Georgia native, has 21 years of experience in the pulpit, having started preaching when he was 16.

Roe, 67, said he is confident First Baptist Tifton will be in good hands when he finishes up later this month.

“I heard a long time ago that the measure of success of a career is not what happens while you’re there but what happens after you leave,” Roe said. “I think the future is even brighter for Tifton. The future looks great.”

What First Baptist Tifton did over the past decade was to engage in an experiment of sorts that proved highly successful. Church leaders began to emphasize contemporary worship, bringing in Mauldin with his unfettered energy to lead a contemporary service concurrent to the traditional service, believing the fresh approach to worship would be key to reaching unchurched people. The numbers tell the tale: More than 230 baptisms over the past decade. Sunday morning attendance increased from 800 to more than 1,000 before the COVID-19 pandemic took hold.

“It’s phenomenal the way it happened,” Mauldin said. “It’s church revitalization and a church plant mixed together in a current operating church. It makes no sense, and I wouldn’t advise anyone to ever do it. But it worked for us.”

“I’m not sure this model would work anywhere else,” he said. “It’s just a rare sequence of events that transpired here.”

Roe said when he saw the fruits of Mauldin’s early ministry at First Baptist Tifton, he realized what the future could be. He said the new pastor is loved here, and so are his wife of 11 years, Taylor, and their two children, Cameron, 6, and Lizzie, 4.

Everything Mauldin does, he does for the Lord, whether in the church or at home, said longtime friend and businessman Matt Bell.

About halfway through high school, Mauldin gave his heart and life to Christ and soon after became pastor at Cathedral of Faith, a charismatic church in southern Georgia. His grandfather, Pastor James Mauldin, had become ill and could no longer serve in the role.

“The senior adults at my grandfather’s church approached me and said you have a relationship with Jesus, and you know the Word, will you just teach us the Bible? “So, I started preaching every Sunday morning.”

Mauldin had learned a lot from his grandfather, including valuable lessons in caring for God’s people.

“He had a way to make every person in the room feel like they were the only person in the room,” Mauldin said of his grandfather. “He was that 3 o’clock in the morning hospital phone call guy. He was always present, always there.”

Mauldin built on that early ministry experience, graduating from Liberty University, leading middle school and high school worship at Sherwood Baptist Church in Albany, and later joining a church plant in Albany. After that, he got connected with Tifton First Baptist.

Nathan Johnson, a Tifton attorney who chairs the church’s personnel committee, said Mauldin grew the church’s contemporary worship service from about 60 people to more than 800, while also starting a collegiate ministry that now includes about 150 co-eds.

“We’ve seen how God has worked through him in these past 11 years,” Johnson said. “You could just tell the Holy Spirit has been working in and through him.”

Johnson describes Mauldin as a “challenging” expository preacher who walks his congregation through the Bible verse by verse and lives by the biblical principles he preaches.

Bell describes Mauldin as the epitome of a real Christian.

“He walks incredibly humbly before God,” Bell said. “I would describe him as one of the most generous, gracious people I’ve ever met. He’s not materialistic. He is almost the opposite of that. Material things don’t even register with him.”

Mauldin said being in ministry has been a great blessing.

“Your job is to grab the hands of the people and the heart of God and pull the two together,” he said. “When you see that light come on, there’s nothing like it. Seeing someone really grab hold of the truth that ‘He made Him who knew no sin to become sin for us so that in Him we can become the righteousness of God,’ that moment is what drives me.”