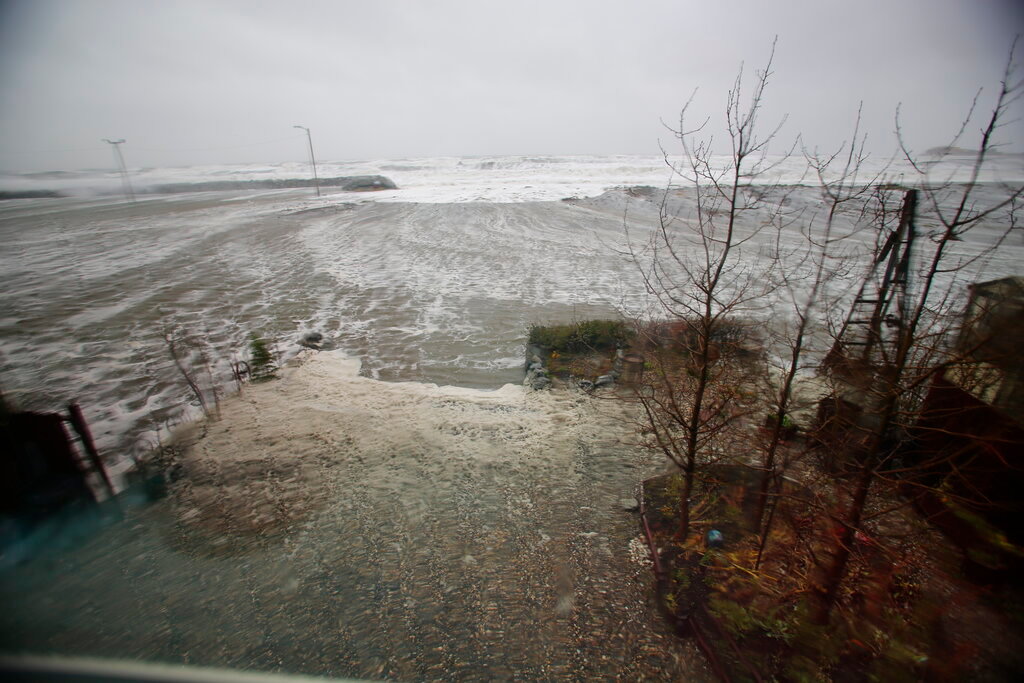 Water from the Bering Sea, pushed by high winds, rushes into a home's backyard in Nome, Alaska, on Saturday, Sept. 17, 2022. (AP Photo/Peggy Fagerstrom) 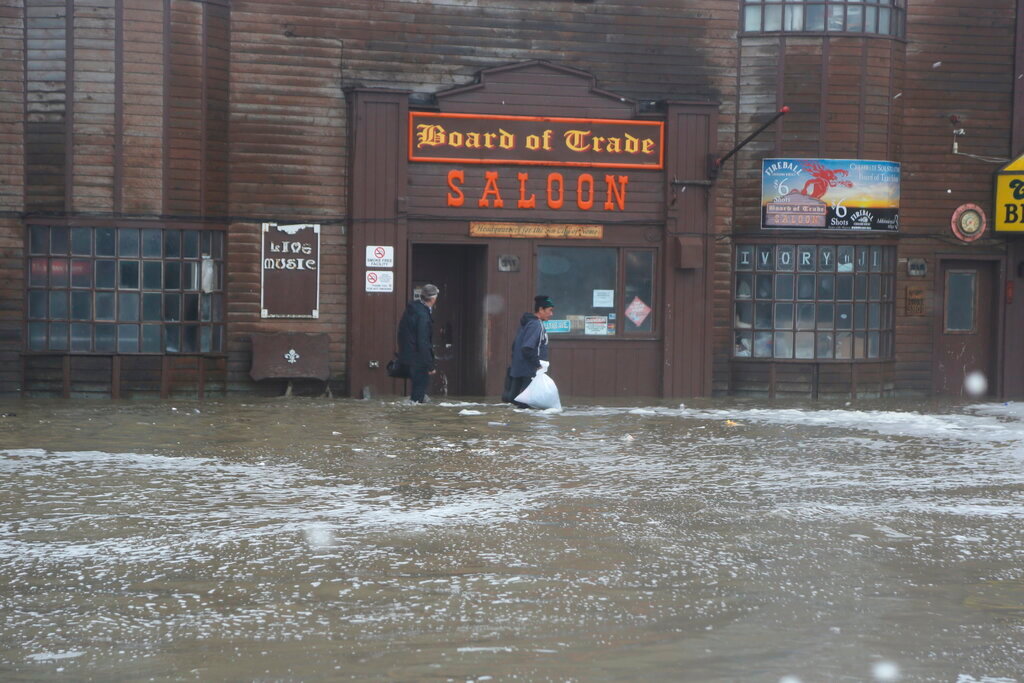 Two men walk through rushing water on Front Street, just a half block from the Bering Sea, in Nome, Alaska, on Saturday, Sept. 17, 2022. (AP Photo/Peggy Fagerstrom) 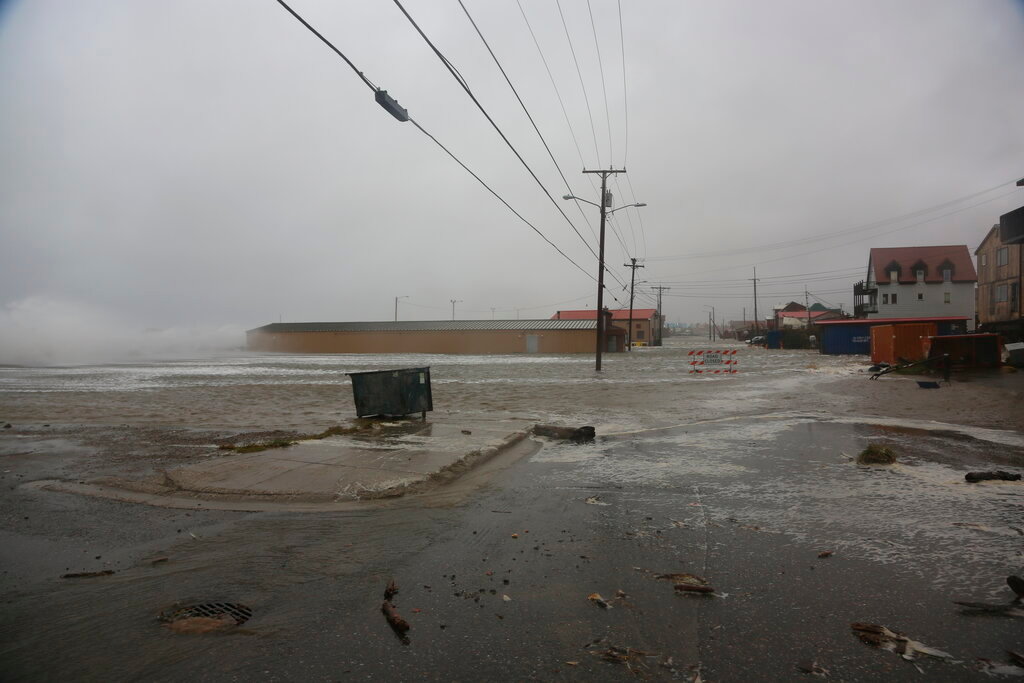 Water surrounds the mini convention center, which is also home to the finish of the Iditarod Trail Sled Dog Race, in Nome, Alaska, on Saturday, Sept. 17, 2022. (AP Photo/Peggy Fagerstrom) 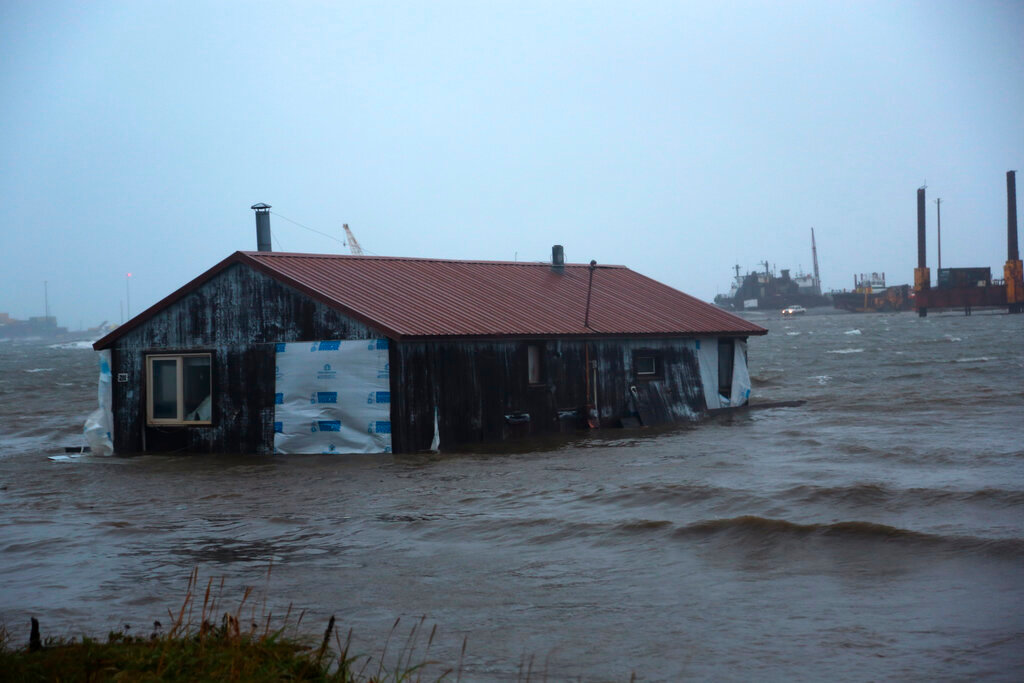 ANCHORAGE, Alaska (AP) — Floodwaters were receding in parts of western Alaska battered by the worst storm in a half century, leaving behind debris flung by powerful Bering Sea waves into beaches and seaside communities.

The storm, the remnant of Typhoon Merbok, was weakening Sunday as it moved north from the Bering Strait into the Chukchi Sea on Alaska’s northwest coast, where it still threatens smaller communities, said National Weather Service meteorologist Kaitlyn Lardeo.

“This guy is going to hang out in the Chukchi Sea for the next few days and just rapidly weaken because it’s so stationary,” she said.

Several communities reported homes were knocked off their foundations by the force of the incoming water, often propelled by winds gusting near 70 miles per hour. One house in Nome floated down a river until it got caught under a bridge.

It was a massive storm system — big enough to cover the mainland U.S. from the Pacific Ocean to Nebraska and from Canada to Texas. It influenced weather systems as far away as California, where a rare late-summer storm dropped rain on the northern part of the state, offering a measure of relief to wildfire crews but also complicating fire suppression efforts because of mud and loosened earth.

There have been no reports of injuries, deaths or missing people in Alaska, the governor said during a Sunday news conference. A child reported missing Saturday was later found, he said.

Dunleavy said roads are damaged and state officials are assessing potential damage to seawalls, water and sewage systems, airports, and ports. He identified five communities — Hooper Bay, Scammon Bay, Golovin, Newtok and Nome — as being greatly impacted by a combination of high water, flooding, erosion and electrical issues in either the towns or their airports.

Emergency management and American Red Cross personnel will deploy to those communities as soon as Monday, while Alaska National Guard members will be sent to Nome, Bethel and Hooper Bay to assist residents. Red Cross volunteers from the Lower 48 will also conduct needs assessments for food, water and shelter in other flooded villages.

Many homes were flooded and about 450 residents on the western coast sought refuge in shelters, with more than half of them at a school in Hooper Bay, where they ate processed moose donated by village residents. Others rode out the storm on higher ground outside their communities.

The storm caused Nome's highest water level since 1974 — 11.1 feet above the normal tide — and other communities may have surpassed levels seen in 48 years ago.

“One of the big features of this storm was the wide swath of significant damage,” said Rick Thoman, a climate specialist with the International Arctic Research Center at the University of Alaska Fairbanks.

“So, did it live up to the hype? I would say absolutely,” he said of the storm.

Becca Luce and her family live about a half mile from the Bering Sea coast in Nome.

“We have a pretty good view of the ocean from our living room,” she said. “We could see the waves crashing from our window and going over the road.”

Nome itself was inundated, including Front Street, the city’s main business thoroughfare that also doubles as the finish line for the Iditarod Trail Sled-Dog Race.

One downtown restaurant, the Bering Sea Bar and Grill, was destroyed by fire Saturday night, but the cause and whether it was related to the storm is not yet known, said interim city manager Bryant Hammond.

Hammond said that the receding water revealed detritus left in streets and yards, including trash, logs and other organic debris, rocks, and asphalt. Part of a highway was washed out in Nome, forcing residents to use a bypass to reach the community of Council, adding up to 15 miles to the 72-mile trip, he said.

“Another major concern is that freeze-up is near, and all of this damage to the roads will need to be repaired before the month ends,” Luce said, using the local term for the onset of winter, which is in October in many parts of Alaska. “And it’s hard to say if that will be possible, especially for the remote village villages without as many resources as Nome has.”

“We just have to impress upon our federal friends that it’s not a Florida situation where we’ve got months to work on this,” he said. “We’ve got several weeks."