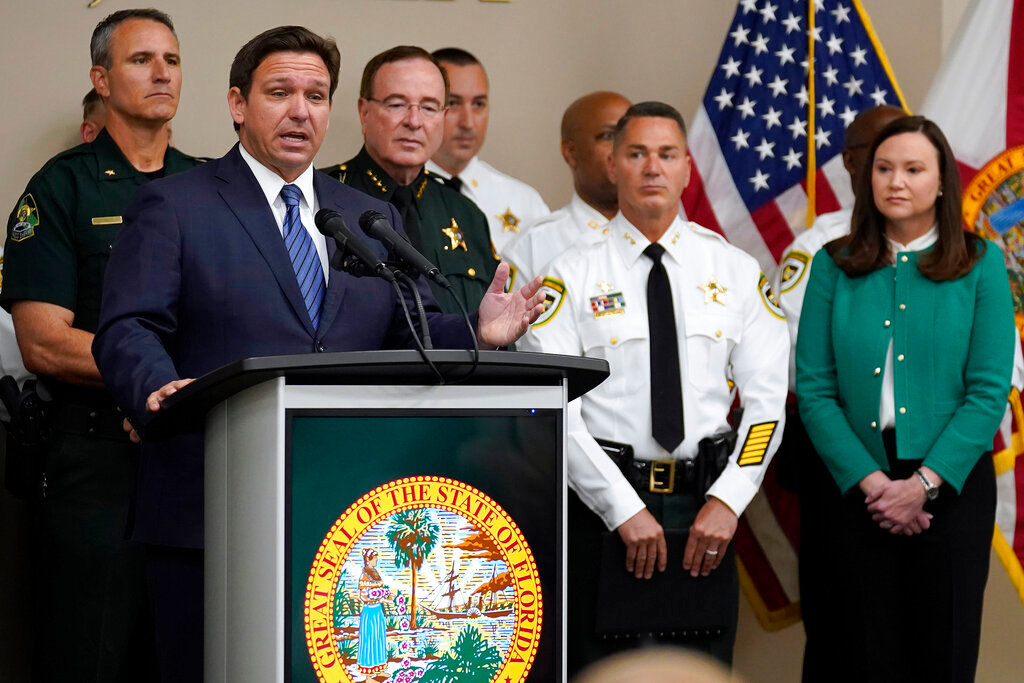 The Republican governor announced the suspension of Hillsborough County State Attorney Andrew Warren at a news conference in the county's sheriff's office, where DeSantis and law enforcement officers criticized Warren for not prosecuting certain crimes.

“When you flagrantly violate your oath of office, when you make yourself above the law, you have violated your duty, you have neglected your duty and you are displaying a lack of competence to be able to perform those duties," DeSantis said to cheers.

Warren, a Democrat, was elected as state attorney by Hillsborough County voters in 2016 and in 2020. His office did not immediately return an email seeking comment.

The suspension comes as DeSantis runs for reelection in Florida and builds his national profile as a potential 2024 Republican presidential candidate.

Asked whether he’s overriding the will of the voters by suspending their choice for prosecutor, DeSantis said Warren’s conduct has fallen “below the standard of the Florida Constitution” and that he’s neglected his duty to state law.

In an executive order formally suspending Warren, DeSantis focused heavily on Warren's signing of statements where prosecutors from across the country said they won't use their offices to pursue criminal cases against seekers or providers of abortion or gender transition treatments.

Florida has not enacted laws criminalizing gender transition treatments for minors but “these statements prove that Warren thinks he has the authority to defy the Florida Legislature and nullify in his jurisdiction criminal laws with which he disagrees,” the executive order reads.

The state's new abortion restriction became effective July 1. It prohibits abortions after 15 weeks, with exceptions if the procedure is necessary to save the pregnant woman’s life, prevent serious injury or if the fetus has a fatal abnormality. It does not allow exemptions in cases where pregnancies were caused by rape, incest, or human trafficking.

Violators could face up to five years in prison. Physicians and other medical professionals could lose their licenses and face administrative fines of $10,000 for each violation.

The executive order also accuses Warren of having a “flawed and lawless understanding of his duties as a state attorney” in his “presumptive non-enforcement for certain criminal violations, including trespassing at a business location, disorderly conduct, disorderly intoxication, and prostitution.”

“The governor's suspension of State Attorney Warren is not political to me. It's about law and order. It's about ensuring our loved ones are safe. It's about the victims and their voices,” said Hillsborough County Sheriff Chad Chronister. He said Warren has been acting as a kind of “supreme authority by reducing charges, dropping cases and singlehandedly determining what crimes will be legal or illegal in our county.”

“I have the utmost respect for our state laws and I understand the important role that the state attorney plays in ensuring the safety of our community and the enforcement of our laws,” Lopez said.