Football, Last Chance U, and the two men who battle

I don't believe it's unfair to say football's become our national pastime. In my household it is, anyway. At the beginning of September the sport all but determines my family's Saturday calendar, whether we're attending a game, planning activities for a TV appointment, or getting together with friends to, yes, watch a game.

At my church, classes have tailgated in the parking lot after worship as a fellowship event. The children's ministry has a jersey day to wear your favorite team's uniform. Bible study groups get together to watch games.

Football coaches occupy an elevated position their sport has commanded in our culture. And so, as Christians we hope the coach of our team stands for our principles. I'm not naive enough to think this is the case every time. Also, I recognize the grace extended these coaches for any moral failure tends to reciprocate with his number of wins.

But man's grace has its limits. With choices come consequences.

This is where you expect me to go into an analysis of Ole Miss coach Hugh Freeze. A coach known for sharing Bible verses on Twitter – I retweeted a few of his posts over the years – Freeze no longer coaches the Rebels, due at least partly to a connection with his work-issued phone and a number dialed to a Tampa, FL escort service.

I know the man as well as you do, which is to say, nothing beyond what I read. Maybe he's a moral monster who used his faith strictly to get an upper hand with recruits. On the other hand, he may be a man who takes his faith seriously but allowed himself to be drawn somewhere he never thought he would.

But he's not the coach I've been thinking about.

Last year, after hearing about it so much, I finally checked out the Netflix series "Last Chance U." The documentary focuses on the East Mississippi Community College Lions, junior college national champions in 2011, 2013, and 2014. The junior college circuit has become known as a place where top-notch football stars kicked off a Division I team can rehabilitate their image in the hopes of being re-signed to another school. 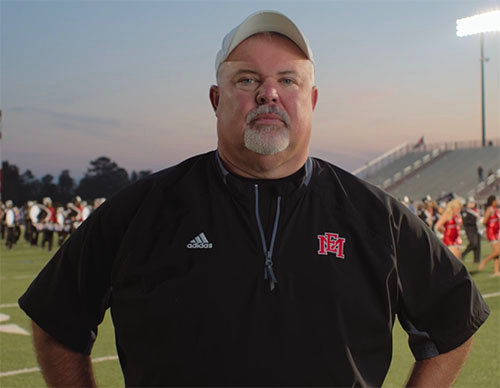 EMCC's reputation for that purpose demands major college coaches nationwide become familiar with the location of Scooba, MS, population 697. The players know those coaches are watching with very keen eyes. They want to know if these young men have come to grips with what's necessary to make a change in their lives. As far as football is concerned, it's their last chance.

Cameras follow selected players in telling their stories to get academically eligible and prove they can contribute for a major program. However, Last Chance U's star is the head coach, Buddy Stephens. With a voice that carries like it's hooked to a Def Leppard concert speaker, Stephens gets the attention of his players. At times, that attention comes through colorful language.

Actually, "colorful" doesn't cut it. Townspeople interviewed described their coach as "hard-nosed" and he certainly was that. However based on the first episode of the Season 2, released by Netflix July 21, they didn't know how far he took his language until after watching Season 1. One fan, an elderly gentleman, went as far as to say that if Stephens couldn't clean up his conduct, he should resign.

In Season 1, you see a conflicted man in Stephens. Along with the episodes of losing his temper are shots of him reading his Bible and doting on his daughters. Yeah, you can argue that was for the cameras. But I don't think so. Stephens comes across as someone wrestling with himself in a Romans 7 way. I know that look because I've seen it in the mirror.

Season 2 opens with a pastor talking about Stephens watching Season 1. Stephens, the pastor relates, didn't like what he saw. He saw a man out of control and in need of a change.

In the first episode Stephens is that man wanting to change. He listens to "Annie's Song" by John Denver driving to practice. "A beautiful song, a serenity song," he comments. The outbursts – the ones on par with Season 1, anyway – aren't there (for the most part). When he slips up and cusses, he drops and does five pushups.

"Can you imagine if a documentary was made about your life?" the pastor asks in the intro. "And they followed you, the good, the bad, and the ugly?"

What would people see? What would you see? Would you like it?

I've purposely avoided learning what happens the remainder of Season 2 for coach Stephens and the EMCC Lions. That's not easy when any Internet search to make sure details for this column, like the populations of Scooba, MS, can bring spoilers. And in case you haven't watched any of it yet, I've tried to not give too much away about Episode 1.

As I write this I don't know how well Stephens is able to do the things he knows he ought to do. I don't know if, like Paul, he doesn't do the thing he wants (be a better man), but instead the very thing he hates (lose his temper).

There are two men in this battle. It's one I've fought often, and still do. It's the me who does what he should do versus the me who doesn't. As one who's given his sins to Christ and claimed victory through the cross, I know the biggest battle is over. However, that doesn't give me license to claim moral superiority. It'd be a bigger sham than Phelps vs Shark.

And that's why I root for Buddy Stephens, a guy I didn't like at the end of Season 1. At times he was a louder, more narcissistic version of Bobby Knight. When needed, he didn't stand up for his players. At times, he didn't take responsibility for himself.

This season, for episode 1, anyway, he's a guy who's looked in the mirror and learned something.

We all need another chance.